Sub Title : Indo-US ties are as vibrant as always – irrespective of who is in power 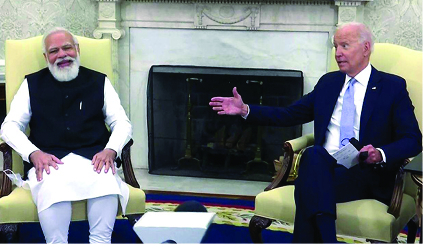 The key takeaway of the PM’s US visit is that Indo-US ties are as vibrant as always – irrespective of who is in power. The Indian PM expressed confidence that India-US relationship will grow even stronger in the years to come. Whilst both countries are on the same page on many issues there are some irritants too

Prime Minister Modi’s visit to the USA has been path-breaking in many ways. His one-on-one engagement with President Biden and Vice President Kamala Harris, reaffirmed that Indian-US ties are ‘stronger, closer, tighter’ and upheld the ‘commitment to democratic values in a partnership for greater good’. It was coupled with the meeting of the Quad leaders – both collectively and individually – and was  topped by a hard-hitting address to the United Nations General Assembly which articulated India’s concerns and also stressed the need for it to take its rightful place at the high table. This visit helped cement personal and institutional ties, and in the backdrop of the dramatic geostrategic changes taking place, it could set Indo-US ties on a new trajectory.

There had been some initial apprehensions that this US administration would not be as forthcoming towards India as the earlier ones. That notion  has been dispelled. Joe Biden has advocated Indo-US ties since 2006, as ‘the defining partnership of the 21st Century’, and he seems willing to carry it to a new level. Prime Minister Modi’s engagement with him – and with Presidents Obama and Trump before that – has ensured not only personal chemistry between the leaders, but also helped establish an institutionalized foundation to the relationship – irrespective of irritants that creep up from time to time.

For too long Indo-US ties had been linked to Pakistan. But then the US was dependent on Karachi to funnel supplies to their troops in Afghanistan, and willing to turn a blind eye to its activities. With the US withdrawal, the need no longer exists. Pakistan’s duplicity stands exposed and its relevance has dropped sharply. Leave alone an invitation, Biden has not even taken Prime Minister Imran Khan’s telephone calls.  Pakistan’s role in fomenting terrorism had been raised in individual discussions and even in the UNGA,  and perhaps there could be a tightening of screws, by placing it on the Black List of FATF, and through a reduction of aid.

During the Modi- Biden meet security topped the agenda, with terrorism, the threat from China and the geopolitical changes in Afghanistan being the key concerns of both nations. There has been greater defense, security and intelligence cooperation after India signed the five foundational pacts, and the US has revealed a willingness to hand over the latest technologies and equipment.  Yet, in spite of the cooperation in defense and security, differences arise in key issue like trade, climate change, human rights and even dealing with other allies. A major challenge will come up, should the US decide to impose sanctions on India under the CAATSA (Countering America’s Adversaries through Sanctions Act) when it takes delivery of the Russian S -400 A D system in end 21. That will put a severe strain on ties, but these meetings doubtless discussed how to circumvent it. The US has also been applying pressure on India to open up its markets even further, reduce tariffs and remove what it views as a ‘protectionist attitude’ towards trade. There is also pressure on India to increase our climate change goals – something our growing economy cannot afford at this juncture. And there are murmurs arising in some sections of the Biden administration on the ‘quality and openness’ of Indian democracy and human rights. But these irritants can be overcome in the broader scheme of things, and the visit would help smoothen them.

Complementing the meeting with President Biden and senior members of the administration and industry was a meeting of the Quad leaders – for the first time in person. Coming so soon after the virtual meet of the four leaders in March, it shows that USA, India, Japan and Australia have thrown their lot squarely behind it and Quad is finally coming of age. The meet focused on a ‘free and inclusive Indo-Pacific’, with China –  the Elephant, or rather the dragon in the room – never mentioned, but always alluded to.   The four nations decided to synergize their capabilities in the production of vaccines – with India manufacturing 1.2 billion doses of the US J & J vaccine, under Japanese financing and Australian logistics. Critical technology – especially in the development of semiconductors and 5 G networks – would also form an integral part of the security architecture envisaged. In this India can emerge as a major manufacturing hub, and become a key player in a ‘secure and resilient global supply chain.’  The heightened emphasis on Quad, coupled with the recently unveiled AUKUS (in which US and UK will help build and deploy eight nuclear powered submarines for Australia) – shows that the much-heralded US tilt to the Indo-Pacific is finally taking place.

By throwing its lot firmly with the US and Quad, India has now  listed somewhat towards the Indo-Pacific. But our key strategic interests lie elsewhere – towards Pakistan, Afghanistan, China, Iran and Central Asia. The US too needs to consider India’s strategic interests there, which they have neglected by their action in Afghanistan, their overlooking of Pakistan’s role in fostering terror, and also by their Iran policy, which hamstrings our interests there. Our security interests have to be balanced before we align with the US tilt towards the Indo-Pacific.

The key takeaway of the visit is that Indo-US ties are as vibrant as always – irrespective of who is in power, it is a now an institutionalized aspect of policy. The other is that Quad is here to stay and is likely to only become stronger when augmented with AUKUS. In the world order that is emerging, India and USA form a major pole, grounded on common values of democracy and human rights. It can form the ideological, economic and strategic counter to China and strengthening this relationship is of mutual interest. It would be consolidated further by the reciprocal visit of Joe Biden, and the next summit of Quad leaders  which is likely to be held in India next year.

While all this has helped strengthen ties, the USA needs to address India’s trade and security concerns a little more, especially on terrorism originating from Pakistan, and Chinese belligerence on our Northern flank. And though India has abandoned its long-standing non-alignment policy, it would be prudent not to put all our eggs in the US basket. Individual ties and groupings should be developed with the EU, Russia, France and Japan. Even our dealings with Iran and China should be based on pragmatism and self-interest, shorn of US pressure. Our independent stance should be always be maintained. That would be the best way to ensure that the relationship is never skewed, but remains one of friends and partners.