India-Pakistan: Can there be Lasting Peace?

Sub Title : One hopes that the present attempt at rapprochement bears fruit 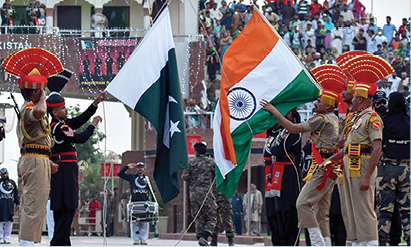 Indo Pak relations have been frosty for the most part. With the passage of time the trust deficit between the two kept increasing and  peace overtures, which were few and far between, quickly fell through One hopes that the present attempt at rapprochement bears fruit for the good of the people on both sides of the divide

The question of peace between India and Pakistan has always been a vexing one, perhaps even unanswerable in some measure. Optimists will answer with a ‘why not’ while the sceptics would tend to say ‘been there, done that : nothing new.’ Eventually, the future holds the answer, even with all the positive tidings afoot in the frosty relationship. But there is one thing that is remarkably different this time, and that is onboarding of the Pakistan Army on the Indo-Pak peace train. Indeed, visibly at least, the current initiative began with both the armies from India & Pakistan making a surprise joint statement last month ‘to respect a 2003 cease-fire agreement’, an agreement that has been in tatters for years.

The result of hectic, secret, UAE-facilitated parleys between the two nations, the back-channel diplomacy may have found it expedient to get the two armies to begin the thaw, but it so obviously has the approval of the political leadership on both sides. The overtures began with Islamabad Security Dialogue (ISD), wherein PM Imran Khan called for a resolution of the Kashmir issue, calling it ‘the lone irritant standing in the way of better ties.’  The all-powerful Army Chief, Gen Qamar Bajwa, extended the olive branch as he made his call to ‘bury the past and move forward.’ In acknowledging ‘politically motivated bellicosity’, he almost wanted to wish away decades of propaganda-generated hostility towards India. That represents a profound change in stance, although it remains to be seen whether all of Pakistan military subscribes to that.

The next steps will predictably involve holding on to the ceasefire, re-establishing full regime of diplomatic relations and resumption of trade and people to people contact. These are important but relatively peripheral to the central issue of Kashmir, although there is a glimmer of hope there too; ‘resumption of peace process or meaningful dialogue’ was well articulated during the ISD, provided India created a ‘conducive environment.’

The road to Indo-Pak peace, as Generals and political leaders on both sides of Attari know, is often long, arduous and treacherous. History records the failure of earlier attempts made by Gen Musharaf and Prime Minister Bajpai.  PMs Nawaz Sharif and Modi made an effort too but the process was derailed, presumably by the Pakistan army.

Both sides have deep-rooted, complex issues which range from water sharing to territorial disputes, with Kashmir being central in the Pakistani psyche. “We have to see how we can resolve it through dialogue and establish relations like civilized neighbors,” said PM Imran Khan at the ISD. For India, terrorism emanating from Pak soil is one of the key issues. Pakistan’s open hostility towards India’s core interests in all international fora and its hitherto collusion with China are among its serious strategic concerns.

PM Khan’s speech at the ISD was notable for its absence of criticism of India. Both sides have toned down the rhetoric for the moment while the ceasefire endures at the LoC. For its part, India’s softening of stance is palpable too. PM Khan’s flight to Sri Lanka was given permission to overfly India while PM Modi sent a personal message wishing Imran Khan a quick recovery from Covid-19.

Indus Water Commission talks are already in progress. These political niceties, however, will soon collide with the harsh realities of historical territorial conflicts. “We are trying, but India would have to take the first step and unless it does that we cannot move ahead,” said Imran Khan without naming Kashmir, but that is where it will want a face saving solution, even as it seeks an end to its economic isolation and opportunity costs.

It is no secret that the Pakistan army has always watched such moves with suspicion, eventually pulling the plug on such existential threats. This time though, one hopes, the Pak army may see things differently. It sure needs to step out of the warp of history and play catch up with the world that has moved on so much. To be fair, Gen Bajwa in his speech did highlight his vision for ‘human security, connectivity and trade in an integrated region.’

There are inherent contradictions on both sides. What was once one country divided into two and the divide just kept getting stronger due to historical and political compulsions, lack of social & cultural connect, dissolving trade, and the gradual loss of one element that is so essential in any rapprochement…Trust. On the balance though, there are equally strong reasons to progress peace – societal, economic and geostrategic that both nations must endeavor to leverage and find common ground for the growth and development of their people. Both countries would of course keep their national interests paramount as the chess board readies again for fresh maneuvers…. hopefully for a peaceful draw.

The game will of course be played in the larger geopolitical context. USA, China and Russia have a major stake in the outcome, and interestingly, not all their interests are aligned unidirectionally. USA has so far displayed no overt position even though it would welcome any move that begins to wean away Pakistan from China. Its overall geostrategic interests in Asia, particularly Afghanistan, are also better served if there is peace between India and Pakistan. China’s stated position encourages rapprochement between the two nations, but its real intent is often hidden behind an opaque strategic layer. China would always prefer a weak India, one whose energies are always tied up in disputes. At any rate, there is little chance of reducing Pak’s dependence on China, irrespective of the outcome of peace talks. Russia’s growing closeness with Pakistan may invoke neutrality influenced only by commercial and anti-US interests.

Notwithstanding that, both India and Pakistan have been offered another shot at peace; this opportunity must not be frittered away. India as a bigger neighbor may need to show magnanimity, such that while safeguarding its own key interests, it also accommodates Pakistan’s sensitivities. The two premises are conflicting, but the political dispensation will have to find enough wisdom, strength and courage within itself to successfully navigate this difficult landscape.