Sub Title : History is testimony to the fact that through the ages Indian warriors have conducted themselves righteously 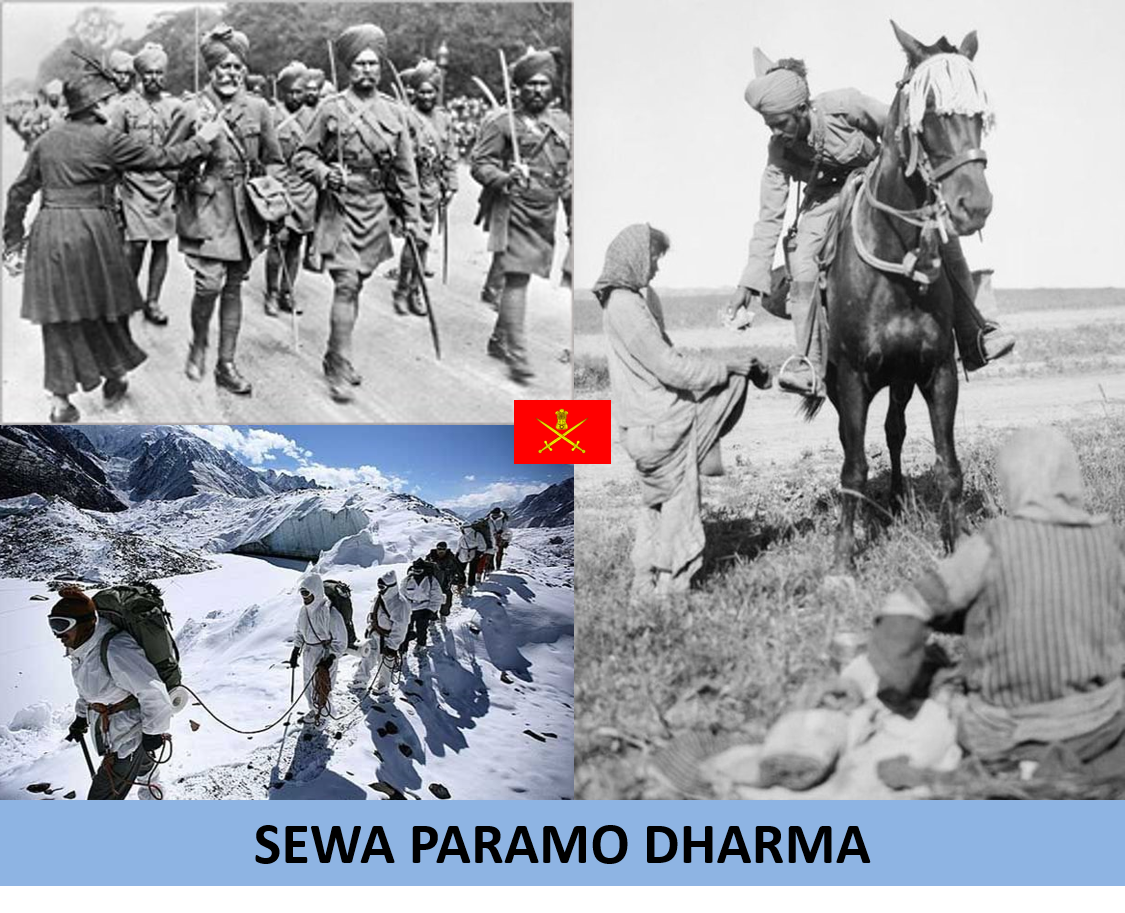 On the occasion of Indian Army Day, this feature is a tribute to the Indian Army and the armed forces. It contains excerpts from the book which our team is putting together.

Indian Army is the ‘Sword Arm’ of the nation, defender of its Sovereignty, Integrity and Independence. It provides citizens a sense of security to sleep and work peacefully. Its strong shoulders have created an environment for business and economics to flourish; the Indian soldier epitomizes the spirit of living for the love of his country and dying for it when duty calls.

Dharma, since ancient times has been  a key concept of Indian philosophy and religions, and therefore holds an undisputed centrality  in the psyche and mind space of Indians. The key constituent of Dharma, even though the exact meaning of the  term may differ from religion to religion, is essentially Righteousness – aimed at providing a moral direction to individuals and society covering duties, rights, laws and conduct based on virtues.

Through the ages following the credo of righteousness has had an influence in matters of statecraft, war fighting and actions of our soldiers during a conflict. The concept manifests itself by virtue of the fact that activities being carried out are in consonance with the ideals stipulated by Dharma. That the consciousness of Indian soldiers was in  harmony with these principles is denoted by the fact that all great Indian warriors portrayed in our scriptures had virtues associated with Gods and were invariably fighting demons and emerging victorious in the end. This is further borne out by the fact that two of the great Indian epics viz the Mahabharat and Ramayana are greatly concerned with the ethics of war.

History is testimony to the fact that Indian warriors have conducted themselves basis the principles of virtuous conduct and hence righteousness is indeed the heritage of the Indian Army and also the two other services. What makes the Indian soldier unique? Unit mottoes and the values they preach have a significant role to play. Mottoes of the Indian Armed Forces’ Services and Regiments come from Sanskrit, English, or a regional language the specific unit is closely affiliated with. A large majority of  them are associated with mythology and inspire the soldier to do his duty selflessly with valour and honour. These values get ingrained into the soldiers’ psyche as the regimental motto is literally worn on the sleeve. Training ethos of the Indian armed forces lays great emphasis on regimentation and one of the key leadership traits inculcated is identification with the unit and men you command. You are a Gorkha, Sikh or Madrasi, not by birth or faith, but by the faith and traditions of the unit you serve with and command.

The Strategic Culture of a nation depends on many factors, namely- history, geography, technology  and national ethos besides economics and politics.

One of the oldest civilisations along with Egypt and Mesopotamia, Indus Valley civilisation flourished around 2500 BCE.  Vedic period started around 1500 BCE.

For the purpose of understanding the Strategic Culture, there is also a need to examine the period of World Wars wherein Indian Army established its mettle overseas.

Post-Independence, India has fought one war against China, three against Pakistan and many smaller battles.

Other noteworthy battles have been fought with Pakistan in Siachen and Kargil. A standoff with China is ongoing in East Ladakh.

India has to be organised and prepared to meet all round challenges as it is easy for the enemy to indulge in low cost proxy war and asymmetric strikes using terrain to advantage.

Science and technology is an important tool for fostering and strengthening economic and social development of a country. India takes pride in having world class science and technology institutions, trained manpower and innovative knowledge base. The nation has notable achievements to its credit in strategically significant spheres of Atomic Energy, Nuclear Science, Missile and Satellite technology. Technology, however, is effective only when supported by relevant organizational structures, doctrines and under circumstances where threat is well defined and strategy well established.

The Role of Religion, Scriptures and Mythology

To reemphasise aspects of Dharma already touched upon in the introduction, it is reiterated that righteousness has indeed been the ethos of the Indian warrior who through the ages has been greatly influenced by religion, scriptures and mythology.  These aspects have also impacted the strategic culture of India. Strategic culture can thus be traced back to Manu (700 BCE) who proposed the strategic thought of Dandaniti in Manu Samriti. The same is also described in Mahabharata and Arthasastra. Kautilya’sArthashastra written around 300 BCE is an important guide on strategy. Despite the Mosaic of historical diversity, the continuity of strategic values was periodically overlaid but never broken. Accordingly, the strategic culture has remained assimilative retaining the ability to coopt rather than coerce. Traditionally Indian warriors have exemplified virtues of the God, for him death in battle meant a ticket to ‘ViraSvargam’, a heaven reserved for warriors. Soldiering has always been considered a noble profession that safeguards good over evil.

A few quotes and examples to amplify the same.

Translated as: O Lord grant me the boon that I may never deviate from doing a good deed. That I shall not fear when I go into combat. And with determination I will be victorious. These are verses from ‘ChandiCharitra’, a heroic poetic composition in the ‘DasamGranth’ by Guru Gobind Singh, the Sikh Guru who wrote this to inspire the common man to rise against tyrannical rule, become soldiers of the faith and be prepared to fight and sacrifice. The mood is essentially audacious, valiant and fearless.

While martyrs inspire awe, scriptures seek from a soldier a resolute desire for victory.

Translated as:  O son of Kuntī, either you will be killed on the battlefield and attain the heavenly planets, or you will conquer and enjoy the earthly kingdom. Therefore, get up with determination and fight: as stated in The Bhagavad Gita Chapter 2, Verse 37.

These documented scriptures and India’s tradition of storytelling (Katha) always highlight the principal of righteousness in war. The Hindu science of warfare values both niti and shaurya i.e. ethical principles and valor. The Rig Veda sets down rules of war, with a caveat that an erring warrior will go to hell:

This is the defining foundation of the Strategic Culture of our great nation.

Not too far back in history Bhai Kanhaiya, a Sikh of Guru Tegh Bahadur during the battle at Anandpur Sahib in 1704 served water to wounded soldiers. He did this sewa without discrimination between the Guru’s soldiers and enemy. When reported upon, he was questioned, Bhai Kanhaiya replied that “he saw no Sikh or enemy he only saw wounded humans”. So pleased was the Guru with his reply that he ordered that “From now on, you should also put balm on the wounds of all who need it”.

More recently Indian Army soldiers gave dignified burials to Pakistani soldiers killed in battle in Kargil when Pakistan refused to accept the bodies back. Indian soldiers responded to this challenge with exceptional grace and buried them with appropriate rites with Indian Muslim soldiers reciting suras from the Quran.

Chivalry, heroism and compassion even in grimmest of struggles were virtues of soldiers of ancient India. Quality and virtuous soldiering remains an Indian Soldier’s forte even today. Thus, righteousness is our heritage.