Sub Title : A cogent argument in support of Aircraft Carriers in the midst of a raging debate on the issue 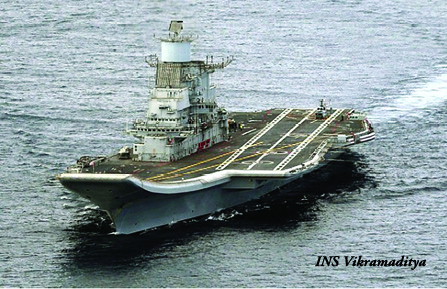 The debate over the centrality of the aircraft carrier in fleet structure continues unabated. The discourse over the decades – and this picked up steam in recent years – has been that weaponry like submarines and missiles, or even drone swarms in the future, pose a serious threat to the target which is not only big in size, but in symbolism as well. While there is some basis to these arguments, the main limitation is that such threats have not been truly proven in real-world combat.  Specific to India, the debate often includes island territories which some strategists see as fixed assets dominating the seas surrounding the peninsula. In this article, Commodore Srikant Keshnur puts across a very cogent argument in favour of Aircraft Carriers and the domination of the seas that comes with the flotillas.

Sceptics in the past have doubted the future of Indian Naval posture. They have brought out that while India faces two-front threat, the necessity to prepare for a two-front war, requiring aircraft carriers deployed in both the coast that can be balanced by developing island facilities and providing airfields on these island territories.

For some, there is a fundamental disconnect that is visible in the expected role of the Indian Navy in the future and would definitely need to define the threats that India is likely to face, not only in the near-term but also in the longer-term. That said, acquisitions for an armed force in response to a future threat have an aspect of crystal gazing of the likely threat. India is a coastal state with a coastline of more than 7500 kms with more than 650 island territories. Any threat from the north and the west, also manifests itself on both our coastlines as a front. If the threat from the north and the west were to manifest itself as a full-scale war and not a limited territorial conflict, then the coastal flanks of India and her island territories become targets that need to be protected.,

Protection of coastal regions and island territories involves measures that could be taken in two ways; up-stream, that is away from own shores or closer to own shores. Prudence would dictate that any measures taken to counter a threat to our coast or island territories should be taken up-stream i.e away from our own shores. That is what the Indian Navy should be equipped to be able to do.

The argument that there is no real distant threat to India in the near-term and therefore the Navy may not need aircraft carriers and expeditionary capability is flawed at many levels. First, history is replete with examples of how naval prowess can defeat even the strongest land-based powers, be it Athens that defeated Sparta in ancient times or Britain that triumphed over France in the medieval period or the European powers that overcame the Moghuls and other satraps by coming from the sea in our case. The necessity for a well-developed Navy to counter a threat from the sea should not be coloured by the long lee of peace. In-fact the increased development of Navies in the region should indicate that the threats that manifest over land in the north and the west will also manifest as a front at sea. Second, it is an old and proven axiom that our force structuring should always be capabilities based rather than threat based for the simple reason that threats can change overnight while capabilities take years to build. Thus, it is myopic to assume that there will be no distant enemies (whatever that implies) given the capricious nature of international relations.

Third, it takes a very long time to develop and perfect capabilities at sea. The Indian Navy has attained a significant degree of professional competence with regard to aircraft carrier and expeditionary operations because the leaders post-independence invested in acquisition of these capabilities. The synergy between the Army and the Navy, required for the Navy to be able to carry troops to shores away from the mainland and the Army to deploy from ships cannot be mastered when the need arises, it has to inherently available to the political and military commander to use as necessary in times of war. Similarly, the ability to fly fighter jets, multi-role helicopters at sea and develop tactics around utilizing this power cannot be developed at short notice. UK’s experience of regaining aircraft carrier operations expertise prior to the commissioning of the Queen Elizabeth indicates clearly that loss of such capabilities has a very high opportunity cost, when threats come knocking.

Fourth, the argument that developing airfields and jetties on island territories can substitute the deployed air and expeditionary capabilities in a Navy does not stand scrutiny. Development of island territories to improve the military facilities and developing deployed capabilities of the Navy are mutually exclusive yet co-dependent activities. India would need to do both. The greatest advantage that deployed air and expeditionary element provides a decision-maker is that these capabilities can stay on station in international waters for a long time. In the Navy this facet of capability is called ‘poise’. Navies can remain ‘poised’ just over the horizon from the area of conflict in international waters without restriction of time. Conflicts play out over a protracted period notwithstanding our own expectations that they may not last long. No shore-based aircraft can sustain over an area for a long time waiting as the situation develops. Aircraft Carriers and Landing ships with troops can remain deployed as the situation develops which provides leverage to the political apex in using other means to address the developing conflict. Island territories also become vulnerable to being attacked and captured purely for negotiation purposes. It would be prudent to remember that in 1965 India did face a threat around the Andaman Islands and it was after the 1965 war and the understanding of what that threat meant that the Navy and the island territories were developed to counter that threat.

In this connection it would not be out of place to recollect that it is in fact the Indian Navy that has been in the forefront of not only seeking faster development of island territories but also committing sufficient forces to be deployed there. Therefore, attempting to sell island development to Navy at the expense of Aircraft Carriers is akin to selling igloos to Eskimos while depriving him of ski scooters. In short, both are needed, both are exclusive while being codependent and it is not a zero sum game between islands and aircraft carriers. One cannot substitute the other.

Fifth, the aircraft carrier provides the fleet protection both in terms of integral air defence and anti-submarine warfare. The development of aircraft carriers was based on the premise that ships at sea were vulnerable to fast moving aircraft and were therefore easy targets. This aspect of naval warfare remains as relevant today as it was in World War II. The argument that the shore-based Air Force could provide the air defence to ships at sea is flawed because ships detect incoming air threats at limited ranges and, at that time, seeking a response from a shore-based aircraft at sea would be redundant because by the time the aircraft got airborne from the shore base, the attacking fighters would have carried out the attack and returned to their aircraft carrier. So, if our possible adversaries develop aircraft carriers or attack with their shore based aircraft when we are closer to their shores and India seeks to counter the threat posed by these adversaries, then India needs aircraft carriers of her own and in sufficient numbers so that we always have adequate numbers available to respond to threats on both our coastlines. Similarly, the ability of aircraft carriers to carry many helicopters enables airborne anti-submarine warfare (Air ASW) which is the ideal way to counter sub surface threats. The Navy’s argument of three aircraft carriers is based on this valid premise. A Fleet with an aircraft carrier becomes a task force or a battle group, without one it largely becomes a collection of ships or at best a Surface Action Group.

It bears mention here that while the author keeps continuously talking of two fronts and the Indian Ocean itself can be regarded as a third front, our Air Force still follows a model of centralized control of assets in war. This is an acknowledgement that Air Force cannot be everywhere. There would be enough and more missions for the Air Force in a multiple front war and for the Navy to not have its organic air assets at that time can be foolhardy.

Sixth, nations and navies operate across a spectrum of conflict, of different stages of war and peace and everything in between. The extended Indian Ocean Region IOR) is a fragile neighbourhood with many challenges of security, extreme climatic events and threats to regional stability. As one of the largest navies in the region many of our friends depend on us to be ‘a security provider’ and assist them to face these challenges. Aircraft Carriers and Expeditionary Forces are ideal for a host of messy situations such as Non Combatant Evacuation Operations (NEO) and Humanitarian Assistance and Disaster Relief (HADR). No nation can build assets exclusively for these purposes; at the same time it is necessary to have these capabilities in our quiver. They add enormously to our endeavours to create a favourable maritime environment.

Seventh, it needs emphasis that Navies are built up not on the basis of threats but interests. While the prognosis of no distant threats is in itself incorrect, we must remember that we would certainly have distant interests or interests across far seas in different parts of the world. Be it our investments overseas, our energy security, well-being of our diaspora or our burgeoning trade with nations all over the world, our interests are bound to be far and wide across the globe and these would axiomatically need to be protected.  It is difficult to think of any other instrument than Fleets built around the Carriers capable of doing this.

Lastly, we need to ponder that if Carriers were indeed ceasing to be relevant why China is in a race to build more Carriers, why UK is reviving its Aircraft Carrier programme, why USA continues to believe in 100000 tonnes Carriers and why France operates Aircraft Carriers. Ditto with expeditionary capabilities in which several nations are investing. We need to think of ‘expeditionary’ as a technical and not as a political term.  As India’s power quotient increases, it does not augur well to be queasy about such strengths and capabilities we have and need to build. Believing that shore based assets alone can enable all this is to reveal a ‘fortress’ mindset, the same attitude that led to our being colonized few centuries ago.