Sub Title : The positive contribution of the Indian Navy 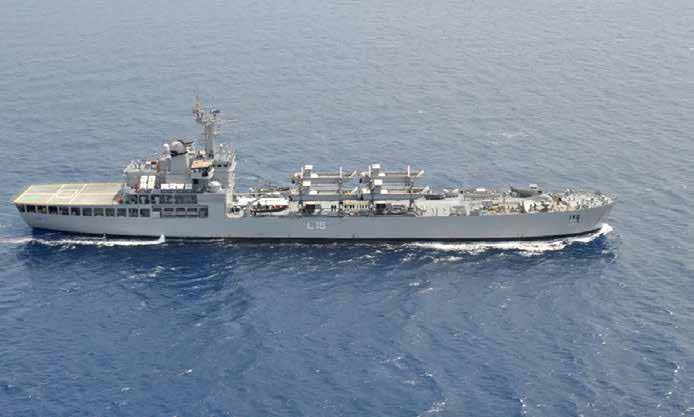 Not only Operation Samudra Setu, the Indian Navy has always been in the forefront of rendering humanitarian assistance to the Indian Ocean island states during natural disasters. It has helped member states of the Indian Ocean Commission to address many of their maritime security challenges through capacity building and is also positively engaged with ADMM Plus/ASEAN.The author articulates the role being played by the navy

On 08 May, the Indian Navy tweeted “#IndianNavy launches ‘Operation Samudra Setu’ (Sea Bridge) to repatriate Indian citizens from overseas @indiannavy ships #INS Jalashwa & #INS Magar are enroute to #Maldives”. The next day, another tweet by the Indian Navy stated “Ships Mission Deployed in the Indian Ocean Region joined #INSJalashwa, on her passage back from #Maldives”. These two tweets highlighted India’s “unwavering commitment to safeguarding her diaspora anywhere in the world” and heralded the first phase of Indian Navy’s evacuation missions ‘Operation Samudra Setu’, under which 698 Indian nationals embarked onboard the INS Jalashwa, the landing dock ship, were repatriated from Male in Maldives to Kochi in Kerala.

The Indian Navy adapted the term and christened its COVID-19 evacuation operations ‘Samudra Setu’ (Sea Bridge). It is also symbolic of Indian Navy’s commitment to support ‘Vande Bharat’, the national mission to repatriate Indian nationals stranded overseas. ‘Setu’ in Hindi language means bridge and is a generic word used by the Indian government during the ongoing COVID-19 crisis. It first emerged in the COVID-19 lexicon through the Aarogya Setu , a mobile application developed by the Government of India to connect essential health services with the people of India.

It is worth mentioning that the Indian Navy continues to be deployed in support of its Mission Based Deployments (MBD) to maintain 24×7 round the year vigil over the Indian Ocean i.e. from the Persian Gulf to Straits of Malacca and from Northern Bay of Bengal to Southern Indian Ocean to east coast of Africa. An Indian Navy statement has noted that the warships, submarines and aircraft “remain on patrol covering a vast oceanic swath from the Straits of Malacca in the east to Bab-el-Mandeb in the West, including undertaking Op Sankalp to provide reassurance and protection to our merchant vessels and anti-piracy patrols in Gulf of Aden.” The latter operation is to ensure the safe passage of Indian flag vessels transiting through the Strait of Hormuz, a fallout of the “deteriorating security situation in the Gulf region post attacks on merchant ships in the Gulf of Oman in last year”

India has been in the forefront of rendering humanitarian assistance to the Indian Ocean island states during natural disasters and there are innumerable examples. In recent times, in 2019 INS Sujata, ICGS Sarathi and INS Shardul provided Humanitarian Assistance and Disaster Relief (HADR) to Mozambique after the country was devastated by cyclone ‘IDAI’. Earlier this year, INS Airavat undertook relief operations in Madagascar after it was hit by floods due to heavy rains. As noted earlier, India’s recent decision to dispatch landing dock ship INS Kesari to some countries of the Vanilla Islands is noteworthy.

These deployments for HADR in the Western Indian Ocean should also be seen in the context India’s role as an Observer in the Indian Ocean Commission (IOC) or Commission de l’Océan Indien (COI), an exclusive island states’ intergovernmental organisation comprising of Comoros, Madagascar, Mauritius, Reunion (French territory) and Seychelles as the permanent members. India has demonstrated a collaborative approach IOC Member States to address many of their maritime security challenges through capacity building particularly in the context of maritime domain awareness.

It is a common sight to see Indian Navy ships operate in the western Indian Ocean and make port calls in Mauritius, Seychelles, Reunion Island, Madagascar and Comoros Islands. Its maritime patrol aircraft (MPA) operate out of the facilities in some of these countries and the recent deployment of an Indian Navy P-8I MPA in Reunion Island is significant.

India has promoted institutional approaches to addressing problems relating to maritime security and these have resulted in multilateral and bilateral maritime cooperation and dialogue with ASEAN and its member states. In evidence are a host of maritime initiatives such as the ASEAN Regional Forum (ARF), East Asia Summit (EAS), Western Pacific Naval Symposium (WPNS), and the Regional Cooperation Agreement on Anti-Piracy (ReCAAP).

In 2007, the ASEAN decided to enlarge the ADMM to ASEAN Defence Ministers Meeting (ADMM) Plus which includes China, India, Japan, South Korea, Australia, New Zealand, Russia and the United States as members to ‘further expand and deepen interactions and cooperation with these extra-regional countries.’ The ADMM Plus has five priority areas i.e. (a) maritime security; (b) counterterrorism; (c) disaster management; (d) peacekeeping operations and (e) military medicine; and are addressed through Experts’ Working Groups (EWGs) who work towards practical cooperation.

The ADMM-Plus countries held the first ever Humanitarian Assistance and Disaster Relief /Military Medicine (HADR / MM) exercise in Brunei Darussalam to ‘represent a concrete demonstration of practical cooperation’. The Indian participation was led by INS Gharial, an amphibious ship, and in a unique act of community service, 50 personnel from the ship donated blood at the Blood Donation Centre, in Raja Isteri Pengiran Anak Saleha (RIPAS) Hospital, Muara.

The ASEAN Centre for Military Medicine (ACMM) is an important institution in the ‘Alphabet Soup’ of the ADMM architecture. The ACMM, through its website, provides details of COVID-19 related information on ASEAN Member States and ASEAN-led regional responses to fight the pandemic. The ACMM has in the past promoted and engaged Member Countries of the ADMM Plus through the Expert Working Group on Military Medicine (EWG-MM). India has been actively engaged with EWG-MM and along with Myanmar, it co-chaired the 3rd cycle of EWG-MM. It also hosted a standalone Field Exercise on Military Medicine in March 2019 at the Army Medical Corps Centre and School, Lucknow, in Uttar Pradesh.

The Indian Navy has been at the forefront of national efforts to fight the pandemic and provided COVID-19 related medical services to the Indian government while keeping itself well insulated from the contagion. It has produced a number of medical equipment such as masks, Personal Protective Equipment (PPE), portable ventilators and ‘air evacuation pod’ to airlift COVID-19 infected patients.

Another closely associated and significant development in this regard has been medical equipment support provided by India to the Philippines. During a port call at Kochi, India, two Philippine Navy ships (landing ship BRP Davao del Sur and patrol ship BRP Ramon Alcaraz) homebound from Oman, embarked Filipino tourists who were stranded because of travel bans. They also loaded a cargo of 200,000 face masks of a total consignment of one million pieces that have been sourced from India by a Filipino businessman Paul Dantes of Legal Zoc, through the Office of Civil Defence.

The COVID-19 pandemic has caused massive social disruptions and unprecedented human health and safety crisis. New Delhi is quite convinced that India’s medical and material support to the smaller Indian Ocean states and its contribution to ASEAN security has the potential to reinforce its vision of SAGAR (Security and Growth for All in the Region) and convey empathy to those affected by COVID-19.

Indian Navy’s evacuation missions ‘Operation Samudra Setu’ is a welcome development and offers phenomenal opportunities to contribute to the regional needs in times of this crisis. Likewise, cooperation through the ACMM/ADMM Plus would further reinforce security engagement particularly in the domain of HADR/MM.

While it is acknowledged that the navies / maritime forces are at the forefront to respond to natural disasters, these would require a flexible and capable force to execute multiple missions including delivering pandemic relation medical support. This would require training, education, equipment and reconfigured orders of battle. In this context, exercises such as the ADMM-Plus HADR/Military Medicine Exercise are critical to build regional capacity to any future pandemics such as the COVID-19.

It is worth consideration that Indian Navy host a virtual Table Top Exercise (TTX) under the ACMM and share best practices as obtained during ‘Operation Samudra Setu’. This could be the primer for a real exercise as and when the conditions improve. Finally, it will be useful for India and ASEAN to spearhead innovative ideas in the form of policies, structures and processes to address future pandemic events such as the COVID-19. In this context, a Declaration on ‘India-ASEAN COVID-19 Response’ would be an important policy vector of India’s ‘Act East’ missions.