Sub Title : Indo-Pacific has become the epicentre of great power competition. Efforts to ensure peace in the Indo-Pacific 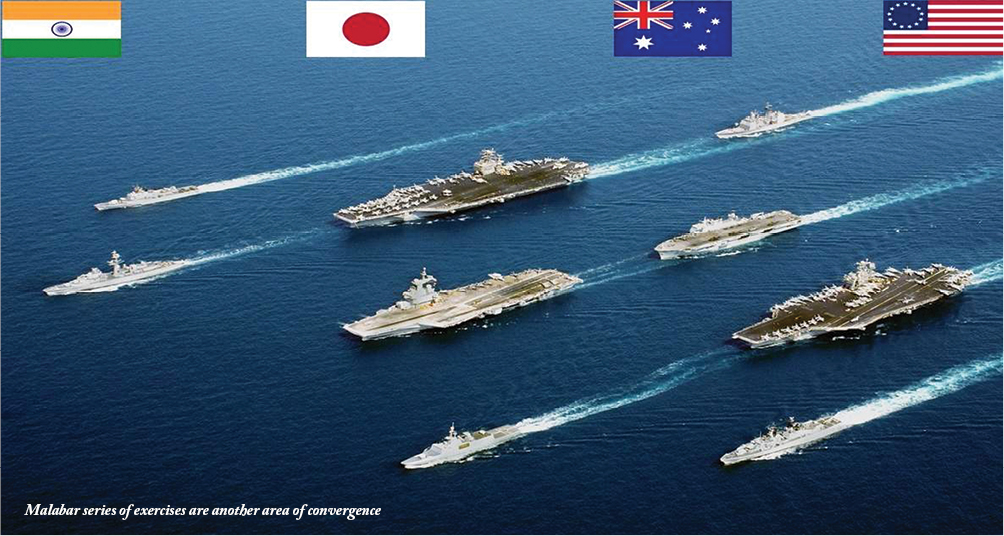 As China seeks to undermine the free and open order impacting every nation supporting and benefitting from the same, the Indo-Pacific has become the epicentre of great power competition. The spill off is that countries are converging to ensure peace in the Indo-Pacific by making the region inclusive, open, stable, secure and prosperous. A delineation of the efforts to this end

In the midst of a highly skewed competitive discourse on the Indo-Pacific pivoting on US-China political-economic-strategic contestation, the Quadrilateral Security Dialogue (QSD), and Malabar naval exercises, etc., a quiet, yet effective alternate dialogue is being endorsed. India, Japan and ASEAN are advancing respective formulations for the Indo-Pacific i.e. India has the Indo-Pacific Oceans Initiative (IPOI); for Japan the priority is Free and Open Indo Pacific (FOIP); and ASEAN focus is on the ASEAN Outlook on Indo-Pacific (AOIP). These vision-outlook support maintenance of peace in the Indo-Pacific by making the region inclusive, open, stable, secure and prosperous.

Prime Minister Narendra Modi launched the IPOI at the East Asia Summit held in Bangkok, Thailand in November 2019. It is an “open global initiative” and “draws on existing regional cooperation architecture and mechanisms to focus on seven central pillars conceived around Maritime Security; Maritime Ecology; Maritime Resources; Capacity Building and Resource Sharing; Disaster Risk Reduction and Management; Science, Technology and Academic Cooperation; and Trade Connectivity and Maritime Transport.” According to the Indian Ministry of External Affairs, the IPOI’s focus is on “enhancing maritime security to preserving and sustainably using marine resources, building capacity, disaster prevention and management, as well as working together in trade, and maritime transport” and these can be achieved by “creating partnerships” among interested countries. The IPOI also features “Security and Growth for All in the Region” (SAGAR), which means ‘sea’, in Hindi. It encourages states to “conserve and sustainably use the maritime domain, and to make meaningful efforts to create a safe, secure and stable maritime domain”.

The IPOI must be read and understood with Prime Minister Narendra Modi’s keynote address at the Shangri-La Dialogue in June 2018, in which he laid out an

all-encompassing  vision for the Indo-Pacific as ‘a free and open’ region. He argued that the Indo-Pacific should be ‘inclusive and open, stable, secure and prosperous region’. With this positive vision India neither sees the Indo-Pacific as a ‘strategy’ nor as an ‘exclusive club’; instead  ‘inclusiveness’ is at the heart of India’s understanding of the region; and as a corollary, Indo-Pacific is not ‘directed against any country’, nor is it a ‘grouping that seeks to dominate’.

India’s vision of the Indo-Pacific resonates with Japan’s Free and Open Indo Pacific (FOIP) which builds around ‘two continents’ i.e. Asia and Africa, and ‘two oceans’ i.e. Pacific Ocean and Indian Ocean”. It merits mention that Prime Minister Shinzo Abe had first alluded to ‘Confluence of the Two Seas’ during a speech at the Indian Parliament in August 2007. India sees several convergences in the Japanese FOIP which seeks to “develop a free and open maritime order in the Indo-Pacific region as ‘international public goods’, bringing stability and prosperity for every country as well as securing peace and prosperity in the region as a whole.” It is built on three pillars; promotion and establishment of rule of law, freedom of navigation and free trade, etc. This will be achieved through cooperation with like minded states such as US, India, Australia, ASEAN, European and Middle Eastern countries, etc.

Similarly, the ASEAN Outlook on Indo-Pacific (AOIP) pivots on ASEAN Centrality with ASEAN-led mechanisms such as the East Asia Summit (EAS) as the underlying principle for promoting cooperation in the region. AOIP seeks cooperation in a broad range of areas of maritime cooperation, connectivity, UN Sustainable Development Goals 2030, economic and other areas of cooperation. The matrix below offers a summary of the formulations of the Indo-Pacific of ASEAN, India and Japan, their objectives, the mechanism and the pillars on which these are built.

The Indo-Pacific is also an arena of power shift (relative and real) and impacts on global security order and future regional economic outlook. It is beginning to generate politico-diplomatic-economic-strategic alignments with overt competitive agendas. While all stakeholders appear to be committed to work for peace and stability in the Indo-Pacific, the prospect of a spiraling competition between major powers i.e. US, China and Russia can be alarming.

The Indo-Pacific has not gone well with China which sees it as a containment strategy. Chinese worries are also accentuated by other ‘old and newer’ initiatives by the US, Australia, Japan and India such as the Five Eyes intelligence alliance, digital connectivity particularly the 5G, Blue Dot Network, a joint regional infrastructure schemes, and more recently the Resilient Supply Chain Initiative (RSCI).

Five Eyes (Australia, Britain, Canada, New Zealand, and the United States), set up in the wake of Second World War, is a signals intelligence sharing network. China is generally recognized as the common threat to all the five members. Asian powers India and Japan, and European nations such as France and Germany also have interest in the Indo-Pacific and could be the Sixth Eye.

As far as digital connectivity is concerned, China is the leader in 5G technology; but Chinese companies Huawei and ZTE are under scrutiny in the US and debarred from operations on grounds of national security. The UK too announced cancelation of 5G contracts to Huawei due to national security considerations. “The swiftness of the change in policy in the UK over 5G and agreement among Five Eyes nations to establish a D10 of democratic and like-minded countries to cooperate on 5G technology is another good example of how China’s aggressive diplomacy has quickly aligned Five Eyes nations’ strategic thinking about Chinese investments in critical infrastructure.” Meanwhile, Australia banned China’s Huawei Technologies Co. and ZTE Corp. from supplying next-generation wireless equipment to the nation’s telecom operators and India hardened its stand and chose to red flag both companies in 5G auction particularly due to the ongoing border standoff in the Himalayas.

COVID19 pandemic exposed the vulnerability of supply chains particularly those linked to China. This prompted India, Australia and Japan to announce the “pressing need for regional cooperation on supply chain resilience in the Indo- Pacific” and decided to launch resilient supply chains initiative (RSCI). They also signaled their determination to “take a lead in delivering a free, fair, inclusive, non-discriminatory, transparent, predictable and stable trade and investment environment and in keeping their markets open” It was also decided to work with regional partners, including ASEAN Member States to build stronger supply and manufacturing chains that are protected from external shocks and influences. In his address on Independence Day, Prime Minister Narendra Modi stated that “The diversification of supply chain is critical for managing the risks associated with supply of inputs including disciplining price volatility. We could provide the core pathway for linking value chains in the region by creating a network of reliable long-term supplies and appropriate capacities,”

In response to the Chinese Belt and Road Initiative (BRI) involving trillions of dollars, Australia, Japan and the US announced the Blue Dot Network (BDN), a trilateral partnership for infrastructure projects in the Indo-Pacific region. In November 2018, three national agencies i.e. Australian Government through the Department of Foreign Affairs and Trade, the United States Overseas Private Investment Corporation (OPIC), and the Japanese Bank for International Cooperation decided to lead the initiative and develop infrastructure for energy, transportation, tourism, and technology to ‘help stabilize economies, enhance connectivity, and provide lasting benefits throughout the region’. Under the BDN, the respective “governments, the private sector and civil society are to promote high-quality, trusted standards for global infrastructure development” and provide “globally recognised evaluation and certification system for roads, ports and bridges with a focus on the Indo-Pacific region”.

The QSD members are aligning to counter Chinese aggressive posturing which Beijing sees as an anti-China alliance in the making of “Asian NATO”.  China’s ambition to dominate the Indo-Pacific faces major challenges but it continues to exploit politico-strategic tools adeptly to obtain naval access and explore newer arrangements for logistical support for the PLA Navy. However, recent trends do suggest that some countries are not keen to provide China access to their military facilities due to domestic political and regional concerns.

Finally, Asia is witnessing an unprecedented contestation which can potentially create Blocks (US led or China driven) that will likely shape the geopolitical dynamic of the Indo-Pacific region resulting in a variety of pathways and shapes the Asian security architecture may evolve into.