Sub Title : A review of SMART tech being added to naval warfare 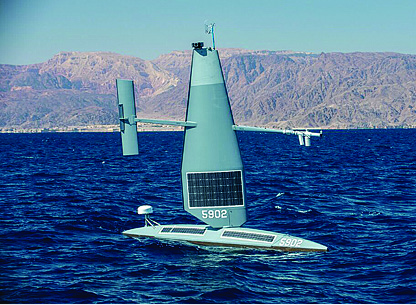 Smart, intelligent, predictive and cognitive technologies are being added to the menu of future naval warfare. The Indian Navy has a roadmap and a plan to build a 4IR enabled force to meet the challenges of the evolving naval environment that will increasingly feature disruptive technologies

As many as 60 navies’, multinational naval tactical groupings such as CMF (Combined Maritime Force), SNMG (standing NATO Maritime group), Op Atlanta, and diverse security agencies- UNODC, USAID, INTERPOL, participated in the International Maritime Exercise/Cutlass Express 2022 (IMX/CE 22) in February 2022. The IMX/CE 22 was conducted in the North Indian Ocean in the area encompassing Arabian Sea- Gulf of Oman- Red Sea and was perhaps the largest maritime exercise (50 vessels) in the region. The participants engaged in multi-mission operations such as maritime domain awareness (MDA), sea control, maritime security, mine countermeasures and other associated tasks.

One of the unique feature of the IMX/CE 22 was participation of 80 unmanned platforms and systems belonging to 10 countries. This is certainly the largest unmanned exercise in the world and therefore merits attention.

According to the exercise planner for unmanned section, “AI and machine learning (ML) were integrated in the bulk of the events” and were used for MDA given that these can “ collect the images and process them into something the commander can use to make informed decisions”. Furthermore, “unmanned systems, especially when fielded in large numbers and employed on a continuous basis, can search the water faster and more accurately than manned platforms”.

It is worth mentioning that an AI based MDA built around space, sea, cyber platforms and supported by advanced algorithms can fuse data from different sources including data from vessel profile library and provide timely alerts of possible threats or suspicious ships before reaching their destinations. In essence, it helps to minimize information gap thus limiting the number of vessels that require investigation.

There is now strong evidence of focused development and integration of Industry 4.0 technologies in naval platforms which evince the evolution of a  new form of warfare that can also be labeled as ‘neo-digital naval warfare’. Smart, intelligent, predictive and cognitive technologies are being added to the menu of future naval warfare, and technology developers have chosen to name these as autonomous platforms and machines, robots, wearable including person-embedded sensors and human mounted computers. Also, Artificial Intelligence, Machine Leaning, Bigdata, Cloud Computing, Augmented Intelligence, Cognitive Computing (CC), Internet of Things (IoT), and Internet of Everything (IoE) are gathering momentum and finding reference in military technology.

There are at least four important reasons that inspire navies to start investing in 4IR-enabled platforms for warfare. First is their ability to be configured for multiple missions and carry different payloads for an assortment of unmanned missions and ‘economies of scale’. For instance, Kongsberg, a Norwegian defense company, is building a multirole warship using commercially available systems. Labelled as the ‘Vanguard’ design, the vessel will have plug-and-play capability and carry ‘pack containers’ for commercial operations as per International Organization for Standardization’s guidelines as also “swap missions as diverse as hydrographic survey to anti-submarine, area-denial, and other roles in a matter of hours”.

Second is the cost of building autonomous platforms when compared with larger vessels. In this context, there is a paradigm shift in thinking to increase the unmanned component in the fleet. U.S. 5th Fleet commander Vice Adm. Brad Cooper “intends to have the drone fleet operational by mid-2023, and it would primarily be tasked with monitoring the movements of Iran and its proxy forces”. This fleet has been designated as Task Force 59 by the US Navy and “has tested out Mantas T-12 unmanned surface vessels in a manned-unmanned teaming role alongside U.S. Navy, U.S. Coast Guard and Bahrain Defense Force vessels”. There is strong evidence that unmanned systems are fast becoming a “critical part of the U.S. Navy’s plans for future capabilities” and the “long-range shipbuilding plan calls for a force of about 150 (larger) unmanned vessels, or about 30 percent of a planned fleet of 500 ships”.

Third is about budgetary challenges of building a modern fleet. This issue has been high on the minds of most of the navies. For instance, the US Navy Arleigh Burke-class destroyers, though “bristling with capabilities, weapons and sensors, are very expensive to build, maintain and upgrade”. There is also “a shift in mindset that says, instead of putting as much stuff on the ship for as much money” which compels to think differently.

There are also advantages arising from reduced crew, maximization of space for weapons, and other expenditure on account of human related errors and negligence. For instance, MUNIN (Maritime Unmanned Navigation through Intelligence in Networks), a three-year project, is expected to save “nearly US$ 7 million over a 25-year period per autonomous vessel in fuel consumption and crew supplies and salaries”.

Fourth, is about low human exposure to collision and vessel groundings. The autonomous ships, depending on the level of autonomy, are expected to possess smart systems to prevent accidents and reduce dangers and risks due to navigational accidents. However, the “extent of consequences resulting particularly from non-navigational accidents (e.g. fire, ship loss due to structural failure) can be expected to be much larger for the unmanned ships when compared to the conventional ones.”

The British Royal Navy has instituted Joint Warrior series and the 2017/1 exercises addressed five 4IR related themes i.e. (a) AI: how building an AI ‘ship’s brain’ will enable the fleet to operate faster, better and more effectively; (b) C4:developing the most efficient and comprehensive computer system possible for the Navy; (c) IX: exploiting the information that is out there; (d) CEMA: offensive and defensive cyber operations to protect our nation’s interests; and (e)  ISR: building the intelligence picture with unmanned systems to further enhance our commander’s decisions. The Joint Warrior 2019 tested the Royal Navy’s “ability to exploit the information environment and is closely linked to the development and deployment of MAS (Maritime autonomous System)”. In 2021, the Royal Marines Commandos constituted in Autonomous Advance Force 4.0 conducted a series of “experimental exercises” in which the UK Commando Force will “operate in the future, putting an emphasis on human and machines teaming closely together to gain a battlefield advantage”.

The British Royal Navy has also introduced a new Artificial Intelligence system called STARTLE designed to enhance situational awareness of potential threats and response times of various insecurities at sea; the Royal Navy’s use of AI for the first time at sea is an important development in ensuring readiness to tackle threats.

Jointness is engendered by technology and joint operations have featured in military doctrines, strategy and concept of operations. It helps to transcend the air, land and sea continuum and cuts across operational doctrines and organisational structures in conduct of warfare. A number of 4IR technologies can support joint operations and jointmanship at the organisational/functional levels. For instance the US Defense Advanced Research Projects Agency (DARPA) “Mosaic warfare” envisages “layering a network with AI [which] would enable the war fighter to better decide which asset is most effective in carrying out a specific mission. A good example for this is that if both Air Force and Navy aircraft are in an area to be targeted, AI could suggest which would be the better choice”.

However, there are limitations with regard to the power/energy needed for such equipment. “While large platforms such as ships and aircraft can carry a lot of power and computing, soldiers on the ground usually can’t. AI could be used to optimize communications in controlling how data and bandwidth are used most effectively”.

The Indian Navy has a roadmap and a plan to build a 4IR-enabled force to meet the challenges of the evolving naval environment that will increasingly feature disruptive technologies. It is exploring ways to leverage 4IR for advancing operational training and war-gaming. The Naval Commanders’ Conference of 2019 had focused on “acquisition of new capabilities, harnessing niche technologies like ‘Artificial Intelligence’ (AI) and ‘Big Data Analytics’ for solutions in the domains of naval combat, convergence of networks/ information, administration, logistics and equipment health monitoring for sustained operations.”

The Indian Navy should explore the possibility of studying the use of 4IR technologies during Malabar series of joint naval exercises with the US Navy. In this context US Defense Secretary Mark Esper remark that the US “together with our allies and partners, must accelerate the adoption of AI and lead in its national security applications to maintain our strategic position, prevail on future battlefields, and safeguard the rules-based international order,” merits attention. Similarly, the other institutionalized Indian naval engagements with the British Royal Navy and the French Navy should be explored.