INTERVIEW: Chief of the Air Staff

Sub Title : QA with the CAS on the occasion of DefExpo 2022 and the IAF’s 90th Aniversary. 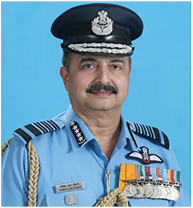 Aerospace continues to dominate the operational arena and is likely to remain so in the foreseeable future. Technology is playing a major role forcing the military leaders to constantly reappraise current and future capabilities in consonance with evolving doctrines. Aerial platforms being very expensive, their obsolescence presents a difficult challenge. Acquisitions, thus, must be well thought of, based on current and future operational parameters. In an interview with South Asia Defence & Strategic Review, ACM VR Chaudhary replies to a number of contemporary issues.

Defstrat: (Doctrinal Changes). Geopolitical developments and emerging technologies mandate a relook at the ‘art of war’.  Is the Indian Air Force looking at doctrinal changes, while it continues on the process of modernisation?  How do such operational doctrine changes maintain synchronization with capability and capacity development of IAF?

Concepts and Doctrines are always evolving to cater to the changes brought about by emerging technologies and new concepts of warfare. However, doctrinal imperative of ‘gaining the high ground’ for military advantage remains true even today. IAF has been reviewing its Doctrine at regular intervals to ensure that the doctrinal precepts remain in sync with IAF’s technological transformation. The Basic doctrine of Indian Air Force was first formulated in the year 1995 which was revised in 2007 and 2012. Catering to transformation both in terms of technology and warfare, a doctrine relevant to the future is planned to be published in 2022.

Defstrat: (Indigenisation and Capability Development). Atmanirbhar Bharat in defence has been progressing well over the past few years. The Indian Air Force too has been ‘vocal for local’ and the positive effect is visible, going by the number of start-ups and new entrants in defence domain. India’s aviation industry, however, is still in a formative stage and may not be able to match global giants in terms of R&D, niche technologies and production processes.  Is there a possibility, thus, that a hurried switch to local may create capability voids in the near and midterm?  How do you guard against such an eventuality?

The vision of “Aatmanirbhar Bharat” is central to our force planning process for the future. India’s evolving Indian aviation industry has demonstrated its capability to match global R&D standards.

The IAF has operated several indigenous aircraft like Marut, ALH, and LCA, as well as those manufactured under license, like the MiG-21 and Su-30MKI. Additionally, a number of aircraft, like MiG-27, MiG-29, Mirage, Jaguar, Dornier 228, An-32 and Mi-17 have been successfully upgraded with the participation of domestic industry.

Today, most of IAF’s ground based radars are either indigenously designed or maintained locally through Transfer of Technology (ToT). Amongst airborne radars, we have already inducted the AEW&C and the Uttam radar is under preliminary testing. We are also inducting several indigenous weapon systems like Astra, AKASH, NGARM, SAAW etc and locally manufactured EW suites for our fighter fleet. Besides these, critical network centric systems such as IACCS, AFNET, eMMS and IMMOLS have been developed by Indian firms.

In this backdrop, it must be appreciated that it is a well-planned transformation to achieve self-reliance. In the eventuality of any envisaged void, we are sanguine that it will be met by a heterogeneous mix of indigenous effort and global purchases to maintain our op capability.

Simultaneously, we are fully committed to support the indigenous projects like LCA, LCH and HTT 40. In the medium to long term we have placed our trust in the fifth generation AMCA project. The C-295, under Make in India, has huge potential for boosting the ecosystem for aerospace industry in the country.

Defstrat: (Technology Cycles). Certain efforts at developing indigenous systems have taken longer than the envisaged time lines.  Such scenarios often result in development of platforms and weapon systems which may have outlived their utility as new technologies dominate the scene.  In such a scenario, would it be better to forego an entire technology cycle and opt for a next generation aircraft rather than evolutionary development of dated designs?

Technology evolution in any industry is a necessary step towards knowledge and capability enhancement. Contemporary air forces of France, Germany and the US are still operating 4th Gen aircraft by upgrading the platform’s avionics and weaponry. India is unique among countries and faces rapidly modernizing adversaries. Thus, there is a need to bridge this gap within given resources. The LCA Mk 1A is being built on the foundation of LCA Mk 1, and these fourth gen platforms are essential stepping stones to the eventual development of an advanced aircraft. We are working towards designing a 5th gen aircraft with 6th gen attributes to enable significant technological jump in our capabilities.

Defstrat: (UAVs and MUMT) Unmanned and autonomous aerial vehicles are an essential and integral part of a modern air force.  What is our current and future capability? Is the IAF also working on Manned –Unmanned teaming concept?

Azerbaijan-Armenia conflict saw the use of manned and unmanned aircraft teaming together for the first time. We are also aware of simultaneous global R&D efforts towards teaming between 4th/5th gen aircraft and UAVs.

Man-Machine Teaming (MMT) systems offer higher readiness, endurance, lethality and survivability without compromising on the ‘human element’ of decision making. At the same time, rapid evolution in technology can lead to faster obsolescence of these systems and therefore there is a need for an open architecture based design and development of such systems.

India is also making progress in this arena via development of Combined Air Teaming System (CATS) UCAV by HAL with the envisaged role to team with LCA Tejas and Rafale aircraft of the IAF. This was a self-funded project by HAL in 2017 which was on display in Aero India 21 pavilion. We hope to see this fructifying in an operational role soon. Additionally, IAF is upgrading its existing fleet of Heron RPAs as well as acquiring small drones for specific roles.

Defstrat: (Aerospace) Aerospace is witnessing vigorous activity with new technologies and capabilities emerging every now and then.  Increasing number of cyber capabilities are also space based with a massive proliferation of low orbit satellites.  Is the IAF maintaining pace with this race?  Are you receiving adequate support from the DRDO and ISRO?

IAF has well established verticals dealing with Cyber and Space matters maintaining close coordination with both Defence Cyber Agency and Defence Space Agency. Cyber domain is a threat area and resources have been allocated towards enhancing our capabilities, procuring requisite equipment and protecting our critical information infrastructure.

The GSAT-7 series of satellites and ground hubs have been approved for procurement along with SDR capabilities. The success of CartoSat, EMISAT, HySIS and Small Satellites (SmSat) are testimony to the synergy that exist between the services, DRDO and ISRO.

Defstrat: (MRCA 2.0) Irrespective of the number of fighter ac squadrons that the IAF may need, there is a definite need to ramp up acquisitions to maintain a certain minimum combat potential. MRCA 2.0 is important from that point of view.  Where are we at the present moment?

RFI for 114 MRFA was issued in Apr 2018 and a number of stakeholders have responded. ASQRs are in the process of being finalized. In the meanwhile, to maintain our combat potential we have planned for phased induction of 83 LCA, two Sqns of AMCA MkI and five Sqns of AMCA MkII. AMCA program is at a nascent stage and we are committed to support its D&D. Follow up orders and other up-gradations in the helicopter fleet are also being pursued.  I would say that IAF is focused on maintaining the requisite combat potential through new fighter inductions while pursuing a coordinated upgrade of its existing fleets.

Defstrat: (Tejas and AMCA) Indigenous platforms and programmes come with obvious advantages, increasing self-reliance being one of them.  Are you satisfied with the progress of the two programmes viz, Tejas and AMCA? Do we need technologies from abroad for developing a state-of-the-art AMCA?

We have already inducted a total of 26 Tejas aircraft comprising 16 of IOC version and 10 of FOC version. The remaining fighter and trainer aircraft deliveries are likely to be completed by Dec 2023. The first D&D flight of LCA Mk1A is would take place in near future with envisaged deliveries starting from Feb 24.  In this regard, Tejas programme is moving at an expected pace. However, production of aircraft needs to be accelerated to meet the delivery timelines.

IAF sees AMCA as a 5+ gen aircraft in design and combat capability encompassing modern technology with better multi role capability. The valuable experience of producing LCA variants will lead to better design and op capability features for AMCA. We can infuse sixth generation technologies in sensors and weapons while planning for stealth features in a 5th generation design. We expect that the AMCA will be infused with the latest technologies in aircraft protection systems and teaming with unmanned platforms.  There’s no looking back on the AMCA as an indigenous system. However, available OTS technologies may be included in AMCA to ensure a time-bound fruition of the project.

Defstrat: (Synergy with the Navy’s Air Combat Potential). What is the IAF’s mechanism of remaining in sync with the Navy as they continue to acquire new capabilities in the skies, particularly for surveillance (ISR) and aerial combat?  Do the IAF plans exist to harness and maximize the potential utilizing the op capabilities that the Navy possesses (and to some extent even the Army), more so in the spirit of jointness?

IAF’s joint op philosophies and plans are validated with sister services via exercises. The joint exercises are designed for enhancing inter-service synergy and attainment of joint objectives through integrated employment of assets of the three services. Such integration includes ISR and aviation assets of the Navy and Army as well. The participating forces train in realistic conditions, employing service specific and joint doctrinal philosophies and tactics. IAF’s op plans are reviewed regularly to further synergize joint response by harnessing each services’ capabilities. IAF has Advance HQs and HQ MAO with the Army and Naval Commands respectively to interface and coordinate the joint effort.