Interview : Chief  of the Air Staff 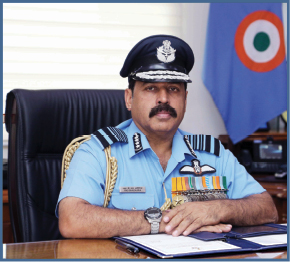 He has been the Commandant of the National Defence Academy and Deputy Chief of the Air Staff. As the Air Officer Commanding-in-Chief (AOC-in-C) he has had the privilege of commanding India’s Southern Air Command as well as the IAF Training Command till his elevation to the Chief of the Air Staff on 01 Oct 2019.

He was awarded the coveted ‘Sword of  Honour’ and commissioned into the fighter stream of the IAF. ACM Bhadauria has experience of over 4250 hours of flying on 26 different types of fighter aircraft.

Defstrat:Domination of skies – how do you rate IAF’s capability to protect India’s airspace and launch an offensive across enemy’s borders given the huge area of responsibility and inimical neighbours?

CAS. The IAF trains to undertake integrated Air battle management with a unified Command and Control over offensive and defensive elements. Our assets, infrastructure and war waging capability caters for the threat perceptions and operations across all our frontiers. Be sure that IAF has the capability to defend our skies and undertake full fledged offensive operations against any adversary.

CAS: Formation of an integrated Air Defence Command is being done to optimise and integrate available resources and develop tri-services decision making structures. This will enhance our combat ability and reduce the sensor to shooter time. Geographical nature of Land, Air and Naval Commands would not hamper the overall AD support provided as resources could be mobilized anytime as is done now. Certain changes to the organization structures would be required and these are being worked upon by a Joint Study Group. It will result in strong and effective AD capability in all areas of operations.

Defstrat: Going into future, what is an ideal ratio between manned and unmanned aerial vehicles for the IAF?

CAS: Force composition and mission planning is done based on outlined objectives and threats envisaged across all spectrums. Ideal ratios will vary as per these parameters for every mission. The threat scenario is extremely dynamic, and the rate of change is rapid. The threat spectrum is also widening to cover all levels of conflict from full scale conventional conflict to sub conventional actors equipped with miniature, but lethal, drones. In our force calculus, we envisage that future responses will not be restricted to a mixture of manned and unmanned aerial vehicles only. We will need to be equipped and ready with a wide range of combat systems and effects from conventionally manned fighters to non-kinetic weapons systems like directed energy and cyber weapons. The final mission composition to tackle wide ranging and flexible threats and actors will vary depending upon the threat scenario and desired mission objectives.

Defstrat: A brief about IAF’s tactical and strategic lift capability.

CAS: The strategic airlift capability of the IAF is built around the IL-76 and C-17 Globemaster fleets. The IL-76 is a Heavy Category Transport Aircraft with a max payload of 40 tons. The advent of C-17 into the IAF in 2013 has added a new dimension to its potency in terms of ‘Rapid Inter-Theatre Mobilisation Capability’ and deployment of Combat Squadrons through round the clock operations. This machine is in the Very Heavy Category with a max payload of 75 Tons.

C-130J ‘Super Hercules’ and An-32 are the main Tactical Airlift Platforms with the IAF. The An-32 was inducted in the mid-eighties and is rugged and versatile with a capability to operate from Advance Landing Grounds in the North / North Eastern states. The C-130J-30 Super Hercules with a payload capability of 18 Tons over 4000 Km has bolstered the Tactical Airlift capability of the IAF. The ac is has a capable sensor suite and is configured for high survivability in the special operations role.

Defstrat: What is IAF’s training methodology for quick deployment of assets over vastly different terrain types along India’s borders and shores?

CAS: The core characteristics of Air power- speed, flexibility and reach – remain relevant at all times. Our combat units are not static formations, deployed in one place and exposed to one environment throughout the year. All our squadrons and units are operationally tasked for various contingencies, and hence must train in all possible conditions on a continuous basis. This means that IAF units, irrespective of their peacetime locations, train to operate along all fronts in all possible types of terrain and weather. While this training is rigorous, the result is that they remain battle ready at all times and are capable of being redeployed at short notice to any location for any mission. This was recently observed during our response to the northern contingency, where our immediate redeployment and combat ready posture served as a deterrent to any misadventure.

Defstrat:Indigenisation – is India really ready for the challenge, given that we have missed many technology cycles?

CAS: Indigenisation is a Key Result Area for the IAF and our modernisation plans are being pursued to strengthen the domestic defence manufacturing base. Amongst modern aircraft we have inducted the indigenously designed LCA, ALH and AEW&C in recent times.  Development of the indigenous LCA Mk1A, LCH, HTT40, AWACS (India), AMCA and RPA is also underway. Cases for Avro replacement aircraft and CIWS are also being progressed following the ‘Make in India’ route. Additionally, the procurement of MRFA through the Strategic Partnership route will provide a tremendous boost to our domestic defence industry. IAF has also inducted several indigenously developed radars and weapons, and much progress has been made in this area.

We are currently in the process of identifying MSMEs capable of establishing Maintenance Repair and Overhaul (MRO) facilities for some of our systems. Cases under various schemes are being pursued towards indigenisation of defence technologies. Fourteen IAF projects are being pursued through the Make-II procedure of Chapter-IIIA of DPP 2016 whereas 18 cases are under the TDF scheme of MoD managed by DRDO. Under the iDEX framework of DIO, MoD for engaging industries (including MSMEs, Start-ups, and Individual Innovators), IAF has participated in three Defence India Startup Challenge (DISC) challenges. IAF is also the nodal service for many projects through iDEX framework.

While you are right that indigenisation is a challenge, the IAF firmly believes that indigenisation is not only possible, but essential, for true strategic development. This will only be possible by a concerted effort from all stakeholders including services, DRDO, PSUs and the private sector. We are firmly committed to supporting the indigenous agencies, but they will also have to proactively work together to achieve these results. With the push and support that is being given by the government on this front, I firmly believe that the time is ripe for all players to take bold decisions and put focussed efforts into truly indigenising our aerospace sector.