Interview: Chief of the Army Staff

Sub Title : The General at his forthright best as always 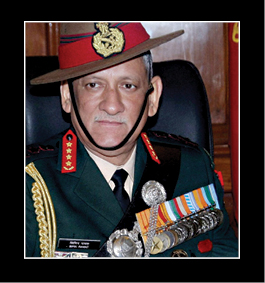 With a distinguished career spanning over 40 years, General Rawat possesses vast experience in all types of operations including command of an UN multinational brigade in Congo (MONUSCO) which undertook active operations. Having won the coveted ‘Sword of Honour’ at the Indian Military Academy in 1978, Bipin Rawat‘s contribution to the Call of Duty has been exceptional throughout his career.

Known for his forthright, frank and affable manner, Gen Rawat always calls a spade a spade and does not mince his words. His views are pragmatic and borne out of first-hand experience and knowledge. A dialogue with General Rawat is always an enriching experience.

As the Indian Army celebrates the 71st Army Day, Chief of the Army Staff in a frank and forthright interview with South Asia Defence & Strategic Review (Defstrat) articulated his views on a number of contemporary issues facing the Indian Army. Speaking with Ashwani Sharma, Editor of the magazine, the COAS shared his Key Result Areas and outlined his priorities. Excerpts :

Defstrat: This past year has witnessed a series of reforms being discussed. launch of massive transformation exercise by Indian Army. In view of this can you give out the initiatives being taken for rightsizing the Indian Army and optional use of budgetary resources?

COAS: The Committee of Experts (CoE) headed by Lt Gen D B Shekatkar (Retd) was tasked by the MoD to look into certain aspects to enhance combat capability and rebalance defence expenditure. In addition to the recommendations of the CoE, we are in process of examining multiple optimisation avenues for rightsizing of the Indian Army. While manpower requirements along our borders and insurgency areas are crucial, there is a scope for determining redundant functions at all levels and manpower in non-core areas. Recommendations for optimisation, if deemed operationally viable, would be implemented. This would lead to savings in the revenue budget.

As regards utilisation of budgetary resources, yes, the fiscal allocation will always be at a premium. There is a responsibility upon us, as military planners, to evolve strategies for its optimal utilisation. Therefore, we have refined our planning process through prioritisation, aligned procurement projects to ‘Make in India’ endeavour, synergised the actions of multiple procurement agencies and addressed revenue expenses in non-core areas.

Defstrat: How effective is the border management along Northern borders with China?

COAS: India and China have a very functional and effective border management system in place to ensure peace and tranquillity along our Northern borders. While the two countries have a historical boundary dispute, very deliberate and considered procedures ensure that the sensitivities of the two sides are respected and that they do not lead to raising of tensions on the Line of Actual Control (LAC). The manifestation of the effectiveness of this mechanism is in the fact that despite differences in perception, we have ensured peace and tranquillity with effective border management mechanisms, which are working well.

Drfstrat: On the issue of capacity development, how is the Indian Army ensuring long term capability development and self-reliance in defence?

COAS: Indian Army pursues its capability development through well articulatedlong term perspective plans. These are designed to augment capability and capacities to meet extant and envisaged security challenges. This planning process is put through regular audit, review and resurgence to keep it congruent to security imperatives.

Infusion of technology and making up critical deficiencies remains a key focus during this pursuit. In doing so, we cannot afford to be import dependent. Therefore achieving self-reliance through indigenous production capability is necessary. For this, revitalizing the productivity of the Defence Public Sector units, participation of our private industry and impetus to research and development is an imperative.

Defstrat: What are the major issues of preparedness and modernisation that concern you as the Chief of the Indian Army and what is the plan of action?

COAS: Our modernisation strategy covers the entire spectrum of conflict and is structured along three cardinal approaches. Firstly, to address conventional warfare capability, we are investing into futuristic weapon systems like combat vehicles, artillery guns, air defence platforms, army aviation and other assets. Modernisation of Infantry weapons is high on our priority. Modernisation roadmap of Infantry lays emphasis on the domains of lethality and survivability, to empower our soldiers engaged in the proxy war as well as insurgency. The second category is the support systems required to augment these platforms. Our road map aims at harnessing technology to build capabilities in the domain of electronic warfare, intelligence, surveillance and reconnaissance. Third category would be the requirements for the ongoing operations in the constantly evolving operational environment.

These plans are aligned with the ‘Make in India’ initiative to intensify impetus for indigenisation, as part of Indian Army’s commitment to nation building. The Defence Ministry has further strengthened the Armed Forces by according enhanced financial powers to meet instant requirements and is making endeavours for allocating requisite financial outlay. A large number of schemes are at advanced stages of procurement which once approved, would significantly boost the efforts of the Indian Army to transform into a more potent and adaptive force.

Defstrat: At times people talk about India’s role as a Regional Power. According to you, what role Army can play towards fulfilling this vision?

COAS: As our nation progresses economically and its geo-political sphere of influence expands, the footprint of our security interests will also increase. This will witness increased multinational engagements and new developments.

Consequently, the need to protect our security interests will chart new and expanding strategic horizons. This will mandate a tri-Services effort to augment the reach provided by the Indian Navy and Indian Air Force, wherein the crucial ‘boots on ground’ will primarily entail Indian Army’s footprint.

Examples of such contingencies could be Humanitarian Assistance and Disaster Relief (HADR), Search & Rescue missions and Non-Combat Evacuation Operations. It may be noted that the ‘ground zero’ situation, where some of these requirements would emerge, will have unique challenges, which may even entail combat response for self-defence and saving precious lives.

Defstrat: Social media platforms are increasingly becoming more a bane than a boom, becoming carriers of disinformation with direct impact on discipline and morale. How is the Army looking to check the deleterious effects of social media?

COAS: In a functional democracy, freedom of expression is respected. It only takes an inappropriate tweet or a status update on social media such as Facebook, Linkedin or a short video on YouTube to cause a major dent in the image of Indian Army. This could happen intentionally or as a result of ignorance or oversight. While we may not have control over the intentional acts, but in order to eliminate, or at least minimise the damage caused due to ignorance or oversight we have tried to raise awareness at all levels about the responsibilities, benefits and risks associated with social media, set a clear and concise social media policy and ensured that it is understood by all personnel. We have also included social media risks in the Indian Army risk management plan and started performing social media audits.