Interview: Chief of the Naval Staff

Sub Title : Views of the CNS on wide ranging issues 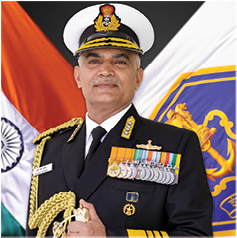 Commissioned into the Indian Navy on 1 January 1983,  Adm Kumar specialised in gunnery as a young officer. He has commanded a number of warships including the Coast Guard Ship C-01, the missile boat INS Nishank, the Rajput-class destroyer INS Ranvir, Kora-class missile corvette INS Kora, and  aircraft Carrier INS Viraat.

His fleet appointments include Fleet Gunnery Officer and Fleet Operations Officer of the Western Fleet. He also served as the Training Commander of the gunnery school INS Dronacharya.

He has also served as Naval Advisor to the Government of Seychelles.

During the second phase of the UN intervention in Somalia, from December 1992 to June 1993, he served in the Civil- Military Operations Centre in Mogadishu.

Defstrat: Indian Navy has been assisting the littoral states in the region with building maritime capabilities. What is the purpose and does the Navy intend continuing with it?

CNS: India is actively engaged in capacity-building and capability-enhancement in the littoral regions of the IOR to serve Indian maritime interests. Capacity-building is most often used in the context of material assistance like provision of hardware such as platforms, infrastructure, equipment or spares. Capability-enhancement, on the other hand, refers to realization of the country’s ability to utilise established capacity to full effect. Capability-enhancement is most often given by way of assisting development of skills, usage of infrastructure or platforms. Examples include training, Maritime Domain Awareness, doctrine development, etc. We have a robust bilateral navy to navy cooperation with many countries in the IOR and we focus on meeting their capacity building and capability enhancement requirements

Defstrat:  Indian Navy has always been lauded as the leading defence service amongst the three in the field of achieving self-reliance or Aatmanirbharta. What are the new emerging technologies that the Indian Navy is aiming to develop within the country?

CNS:  Futuristic technologies are major enablers to enhance the efficiency of our warfighting platforms and to seamlessly integrate them into a cohesive force.  With an eye on the future, it is imperative that we should start preparing in advance so that when emerging technology matures, the industry and the IN are ready to adopt the technology seamlessly. Various new technologies in the domain of, ‘Electrical Equipment’, ‘Weapons and Sensors’, ‘Information Technology’ and ‘Marine Engineering Equipment’ are being pursued at the Naval Headquarters and are planned to be developed within the country. Details of initiatives, classified under the above-mentioned categories are enumerated in succeeding paragraphs.

Communication Equipment. In the domain of communication equipment, while majority of the present-day systems onboard IN platforms are indigenous, in order to achieve self-reliance in Satellite Communication, indigenous development has been initiated for both Above and Below deck equipment. Also, development of cognitive radio and radar systems is also being pursued through DRDO Young Scientist Laboratory.

In the domain of Weapons and Sensors, a project for development of Next generation Sonar is being progressed. Towards achieving self-reliance in Fire Control Radars, development of a Naval Fire Control Radar (NFCR) for Gun mounts is also being undertaken through private industry. Additionally, multiple R&D projects with academia are also in the pipeline including a buoy-based surveillance technology termed ‘Comprehensive Ocean Area Surveillance Technology (COAST)’.

To leverage AI into operation and maintenance of IN systems, development of 25 AI based projects has been initiated i.a.w the guidelines of ‘Task Force Report’ on ‘Strategic implementation of AI in National Security and Defence’. Major projects being steered include, Development of autonomous vehicles, NLP based language translators and AI enabled pull mechanism to extract information from various documents.

Electric Propulsion technology is maturing at a fast pace for marine applications. IN has also taken a leap into the field of All-electric propulsion. The Technology Demonstration Vessel (TDV) has been commissioned and will be the first IN vessel to be powered by an Integrated Full Electric Propulsion (IFEP) plant.

With the advancements in material technology, the use of composites for marine applications has also been explored. Valves, seawater pumps and HP air bottles made of composites are presently undergoing trials to evaluate the suitability of range of military applications.

IN has also placed significant emphasis on green technologies to evolve as Blue Water Navy with Greener Footprint. New generation Fire Fighting systems based on environmentally friendly substances have been inducted to phase out Halon-based systems. R&D Project has been taken up with DRDO for the development of Thermo-Electric Refrigeration Plants.

Significant strides have been made by IN in collaboration with academia and research institutes for the induction of hydrogen-based technologies such as the development of fuel cell-based Air Independent Propulsion for submarines and the injection of hydrogen in diesel engines.

Whilst, the use of technologies is continuing in its right earnest, induction of technology into the IN is being steered in a comprehensive manner catering for aspects such as infrastructure, training, product support and obsolescence management. Ensuring maritime superiority requires a ready and capable fleet, which is largely dependent on reliable technology.

Defstrat: The ongoing Russo-Ukraine conflict is not a classical war between two equal adversaries. Yet the long-drawn conflict has many a military lesson to learn from. What lessons has the Indian Navy learnt from this conflict?

CNS: You have rightly highlighted that the conflict is ongoing. Therefore, it may be too early to draw any definitive lessons at this point. However, there are some aspects that have gained prominence. Two of these are use of unmanned systems and information dominance/ manipulation. We continue to monitor various developments. However, we would like to examine various aspects of the conflict in a deliberate manner before drawing lessons that we may look at implementing either in terms of doctrines or operational philosophies.

Defstrat: How well is the Coast Guard integrated with the Indian Navy for operations? Are there any areas where there is an overlap and further refinements can be made?

CNS: The Indian Navy and Coast Guard have a high level of synergy. There are regular interactions and exercises, along with other maritime security agencies. As you are aware, we just concluded Exercise SEA VIGIL, which saw integration of resources of not only the Indian Navy and Coast Guard, but various national and state agencies. These exercises and interactions help us identify areas that can be further fine-tuned to enhance synergy as also make our processes and procedures more seamless. Where there is overlap, if any, these exercises help us identify them to enhance our effectiveness to ensure India’s Maritime including Coastal security remain robust.

Defstrat: The Indian Navy has a well thought out Maritime Capability Perspective Plan. Does this include a power projection capability in the Indian Ocean and the Indo-Pacific region?  Are we looking beyond conventional capabilities for effective deterrence and dominance of the IOR?

CNS: The MCPP is the guiding document towards force structuring and capability development of IN. The thrust areas for force development have been deterrence, power projection, sea control, SLOC security, diplomatic and other roles which are drawn out from the Indian Maritime Doctrine, with the Maritime Security Strategy defining the contours of the MCPP.  Accordingly, the desired Force Mix and Teeth to Tail ratio has catered for the Power Projection matrix and Sea Control capability in our Areas of Interest, which partly extends to the Indo-Pacific region, and facilitate Out of Area Operations singularly or in conjunction with friendly foreign countries.

Adequate capability to achieve desired power projection, influence events ashore in crises, support land campaign during conflict, undertake Military Operations Other Than War (MOOTW) and render succour/ assistance through HADR/ NEO has been catered in the MCPP for IN’s Areas of Interest.

Defstrat: Commissioning of IAC1 INS Vikrant is indeed a matter of pride for all the stakeholders involved and all the Indian citizens. The debate for the Indian Navy acquiring another Carrier Borne Naval Task Force based on IAC2, however, continues unabated. In view of the monies involved and the emerging (disruptive) technologies and threats, does the Indian Navy plan to rethink its capability acquisition priorities?

CNS: As a Blue-water force, considering the vast area of operations, operational philosophy centred on sea control and growing threat in the IOR, the IN has a requirement of three operational aircraft carriers. This is also important towards sustaining our Maritime Dominance in all three geographical expanse of the Indian Ocean Region.

INS Vikrant stands testimony to our nation’s efforts towards the complete indigenisation of our Armed Forces. With this India has become part of the elite group of Nations possessing the niche capability to indigenously design and build an Aircraft Carrier. The technical expertise gained in the indigenous construction of INS Vikrant is precious and should be capitalised upon to accrue savings in terms of cost and time. Therefore, induction of a third carrier through indigenous construction is being actively explored.

Coming to Capability acquisition priorities, all Projects of IN are being regularly reviewed and prioritized in order to judiciously utilise available budget and accrue maximum optimization. IN has realigned its operational philosophy to Mission Based Deployments. With incorporation of Operational costing, all missions are meticulously planned to ensure fiscal prudence, resulting in maximum outcome with the available resources.

Towards expeditious capacity and capability building of the Navy, 43 ships and two submarines are already under construction. In addition, AoN has been accorded for the construction of 49 ships and six submarines (all indigenous). While all these platforms will have a high indigenous content, they will be equipped with ‘State of The Art’ systems and advanced weapons and sensors with high lethality. In addition, 111 Naval Utility Helicopters and six P 75 (I) submarines are envisaged to be inducted through Strategic Partnership (SP) route. While the Indian Navy evolves towards becoming a fully AatmaNirbhar Force, Combat Capability of the platforms are given the highest priority. In addition, the Navy is already progressing well towards enhancing its surveillance capability through induction of Long Range Maritime Aircraft, Unmanned Surface, Underwater and Aerial vehicles, with adequate impetus to AI and Robotics to leverage on emerging technology to enhance IN’s combat and surveillance capability.