Interview with the Army Chief

Sub Title : A frank and forthright exchange of views 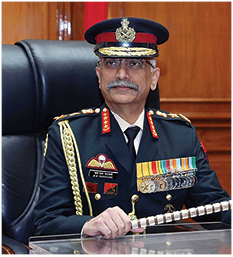 General Manoj Mukund  Naravane, PVSM, AVSM, SM, VSM, ADC took over as the 28th COAS of the Indian Army on 31 Dec 2019. An alumnus of NDA Pune and IMA Dehradun, General Naravane was commissioned into 7th battalion The Sikh Light Infantry in June 1980.

In an experienced and distinguished military career spanning almost four decades, Gen Naravane has the distinction of holding key appointments in active Counter Insurgency environments, both in the North East and in Jammu and Kashmir. He was a part of the Indian Peace Keeping Force in Sri Lanka during Operation PAWAN and also served as a Defence Attache at the Indian Embassy in Myanmar for three years. He commanded a Rashtriya Rifles Battalion in J&K and an Infantry Brigade in the Eastern Sector. He went on to command IGAR (North), a prestigious Strike Corps in the Western front as well as the Delhi Area. Prior to being appointed as the VCOAS in Sep 2019, he was GOC-in-C of Eastern Command and Army Training Command.

Defstrat. Command, Control, Communications, Computers, Cyber, Intelligence, Surveillance and Reconnaissance (C5ISR) are essential components of Modern Warfare and cyber warfare (EW and CW), drone technology and anti-drone capabilities are also playing a predominant role. Are we developing the requisite doctrinal clarity about these aspects and do we have the necessary wherewithal in sync with what our potential adversaries, especially the one on our Northern borders?

COAS:   Information superiority and exploitation of technology in  the context of present day warfare is essential for success given the increasingly complex threats and challenges. The Indian Army is passing through a transformational phase to evolve as a truly Digital Army by incorporating contemporary technologies. Our Information Systems are being exploited at the grass roots level and Operational Information Systems are in various stages of testing/assessment and these systems when approved would be deployed as integrated systems thereby providing a cutting edge to commanders at all levels for effective decision making and fighting future wars by leveraging the technology of the day.

The vision of a future Digital Army encompasses robust network connectivity, miniaturisation of hardware, authentic data repositories and automated systems to stay ahead of our adversaries. Restructuring, where required, to meet these challenges and leveraging indigenous IT efforts for economically viable projects is also being pursued vigorously. We aim to fast track the transformation of the Indian Army through digitisation and we are well on our way in this regard.

Defstrat. ‘Make in India’ initiatives and reinvigorated efforts towards indigenisation and being ‘Atmanirbhar’ on niche technologies is gathering momentum. What is the likely impact on the issue of capacity and long-term capability development? How can we facilitate development of a credible military industrial complex within the country in the next few years?

COAS:   Indigenous defence industry is a prerequisite for self-reliance in capability building and  for being able to exercise strategic influence and freedom of action. In consonance with the mandate of ‘Atmanirbhar Bharat’, enunciated by the Hon’ble PM, the Indian Army has taken major policy decisions to support the growth of the indigenous defence industry. We remain committed to provide all-out support to enable our industry, especially in the domain of R&D, so that they can provide the cutting edge to win tomorrows wars. The Army Design Bureau (ADB) is a single window facilitation agency to closely interact with all stakeholders. The Army’s Problem Definition Statements are released annually to provide a clear direction to the industry. Indian Army also supports R&D for development of niche technology through Army Technology Board (ATB) and the Technology Development Fund (TDF). Presently, 12 projects are under progress in ATB including cutting edge technologies. The TDF likewise, looks at the development of technologies and prototypes with potential use for Defence Services and has an annual budget of Rs 100 crores.

Defstrat. Our troops have been deployed on the LAC despite severe winter conditions protecting our borders with determination and resolve. The nation is very proud of them. Are we adequately prepared to increase our physical presence on these borders permanently? Do we have any plans for increase in infrastructure and electronic surveillance?

COAS:   The Government is cognizant of the differing perceptions of LAC along the Northern Borders and has fully endorsed the response of Indian Army. The Indian Army is very clear that no loss of land or change in status quo  is to be permitted.

To facilitate deployment of our troops on the Line of Actual Control, especially during the winters, smart accommodation has been built from scratch and  appropriate winter gear has been provided to the soldiers.  This includes clothing and equipment for extreme weather conditions. The smart camps have provisions for electricity, water, heating and other facilities. These have been built over the past few months and can lodge thousands of troops comfortably.

We are well seized of the necessity of electronic surveillance and the aspect is being taken due care of.

Defstrat. Will the abrogation of Article 370 have any impact on the Army’s deployment and operational approach in the UTs of J&K and Ladakh? Is there a likelihood of changes to the AFSPA effective in J&K?

COAS:   The security situation in Jammu and Kashmir has witnessed progressive improvement since the abrogation of Article 370. The Security Forces aim to provide a secure environment to the Awaam (people) who have suffered a lot during the last three decades, due to terrorist violence. Attempts of inimical elements to mislead people by running disinformation campaigns have been successfully countered by proactively monitoring the situation and engaging with the local population. Awaam has given a very clear signal of a desire to lead peaceful lives. The modification of AFSPA is a decision that the government will take basis the situation.

Defstrat. It is seen that social media has progressed from being a tool to a weapon of war. Shaping narratives is as important as combining different instruments of power to exert influence. Are we in the Indian Army adequately trained, equipped and empowered to achieve the requisite levels for exploitation of this medium?

COAS:   One of the major global and regional security challenges is being posed by social media. The platform is being extensively used for spreading fake news or distorted information to run disinformation campaigns. These campaigns are aimed at creating disharmony amongst people as also reduce their trust in the established institutions of the country. Social media is also being extensively used for luring people into various espionage/ subversive activities by our adversaries. There is a definite requirement to be on guard against all these threats. We have measures in place to keep a check on such events.

All it takes is an inappropriate tweet or a status update on a social media web page or a short video to adversely affect the image of Indian Army. We counter this by providing correct and authenticated information promptly.

We have raised awareness at all levels about the benefits and risks associated with social media, set a clear and concise social media policy and ensured that it is understood and all personnel. Whilst we may not be able to totally negate the impact of social media, our endeavour is to minimise the adverse impact that it can have.

Defstrat. There is a paradigm shift in the quality of intake required for the Army in case of both officers and PBOR because of socio-economic factors and technological advances. This coupled with increased aspiration levels of the Army optees needs deft Human Resource Management. What initiatives are we taking in this regard?

COAS:   Indian Army is a highly motivated force, ready to face security challenges, across the entire spectrum of conflict.

To attract the right type of youth to join the Indian Army, apart from recruiting notifications and publishing informative advertisements in leading dailies, wide ranging interaction is being undertaken with the target audience at regular intervals, wherein officers from the Recruiting Directorate and teams from Headquarters Recruiting Zones visit Universities, Colleges and NCC Units. Headquarters Recruiting Zones and Army Recruiting Offices are mandated to deliver motivational talks in educational institutions. Command Headquarters also organise ‘Know Your Army’ exhibitions periodically to spread awareness and motivate youth to join the Indian Army. Various publicity stalls are put up in career fairs and trade fairs across the country to motivate and guide the youth to join Indian Army.

In service, earnest  and sincere efforts are made to meet the aspirations of all concerned, be it about promotion avenues or remuneration, within stipulated norms.

Defstrat. There is a saying that ‘The more you sweat in peace, the less you bleed in war’. Consequent to the COVID-19 pandemic and many outdoor events and activities have been cancelled. Also, the routine Medical Boards have been withheld. Do we have any plans in the future to bring back the focus on physical fitness, outdoor training, sports and adventure activities?

COAS:   The Army has already started conducting physical training activities such as live training exercises, firing, EWTs, PT and games with adequate Covid-19 restrictions, albeit on a lower scale as compared to pre-Covid days.

A balance between precautionary measures and preparedness is being ensured.

Defstrat. Our Veterans have been looked after with great compassion during the Pandemic. However, the regular interaction that took place and brought in warmth to the relationship between the serving and veteran communities has been impacted by the pandemic. Do you have any plans to revitalise this important aspect?

COAS:   The Indian Army considers the veteran community as a pillar of strength. We have left no stone unturned to ensure that the veterans get the respect and care that they deserve. While physical engagement with veterans may have been reduced, the same is being adequately ensured through digital means, including social media.