Sub Title : TIsraeli–Palestinian conflict is one of the world's most enduring hostilities 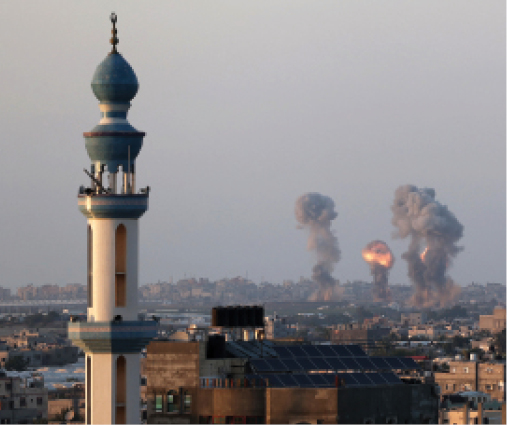 The Israeli–Palestinian conflict is one of the world’s most enduring hostilities. The situation came to a boil once again as both sides battled it out with rocket and airstrikes on the one hand and communal clashes in the streets on the other. The ceasefire at the end of this round of fighting is just a temporary reprieve for the mistrust and enmity are deeply ingrained. The world needs to find a lasting solution to the issue

Tensions between Israel and Palestinians were simmering due to the potential eviction of dozens of Palestinians from homes in the Sheikh Jarrah neighbourhood of East Jerusalem. Violence erupted on 07 May when Israeli police acted against protesting  Palestinians at the Al Aqsa Mosque, where they  traditionally assemble to break the fast after evening prayers during the holy month of Ramzan. Many stayed on after the evening prayers  to protest against the evictions in the city which is at the core of the Israeli-Palestinian conflict. Protesters clashed with the Israeli police, which then dispersed the protesters with tear gas, rubber bullets and stun grenades. More than hundred Palestinians and seventeen Israeli police officials were injured.

Protests expanded across Jerusalem and worsened on ‘Jerusalem Day’ on 10 May – the anniversary of the Israeli capture of Jerusalem in the 1967 War – which is also marked as Nakba Day, or Catastrophe Day, by the Palestinians. As the protests intensified, Hamas delivered an ultimatum to withdraw the security forces from the Al Aqsa Mosque by 6 PM on 10 May.  Minutes after the deadline 150 rockets were fired into Israel. Israel began its own operation ‘Guardian of the Walls’ and launched a series of air strikes into Gaza. The fourth Israel – Hamas engagement had begun.

A truce between the warring parties finally led to a cease-fire on 20 May. But the eleven days of conflict saw 258 deaths (12 in Israel), over 4500 rockets fired at Israel and over 200 Israeli air strikes in Gaza. But as both sides claim victory, and the rockets and air raid sirens fall silent, the reverberations of the conflict still ring out. It could have a telling impact on the volatile Middle East.

The last war between Israel and Hamas in 2014 lasted 51 days and caused over 2700 casualties – most of them civilians. This round has been fortuitously shorter and less bloody. Yet the eleven days have seen more rockets fired at Israel and more extensive Israeli bombardments than even before. As always, the worst affected were the beleaguered inhabitants of Gaza Strip. Gaza has been in a state of siege since 2007 ever since Hamas took over and Israel imposed a land and sea blockade there. The blockade has caused immense hardship to the 2 million Gazans, but it has been unable to prevent a steady flow of weapons and equipment – including a stockpile of over 14000 rockets and missiles – which have been secreted by Hamas and hidden in tunnels along the countryside.

Hamas rockets – most of them supplied by Iran – have caused the most concern, even though physical damage has been minimal and most have been intercepted by the Iron Dome system. Hamas tactic of firing volleys of over a hundred at a time, ensures that at least some of them penetrate the air defense system and get through. These rudimentary, inaccurate rockets can cause panic and create significant damage. Intercepting each one by a Tamir interceptor missile costing $40,000 each ($80,000 since they are usually fired in pairs) could be expensive.  And even the Hezbollah – another proxy of Iran – joined the fray by firing them from Lebanon, indicating that the conflict could have had wider repercussions had it not been contained in time. Though Israel claims to have destroyed over 200 launchers and forced Hamas to expend over 4000 rockets, this stockpile could be replenished relatively soon. And Iran will be more than willing to help do it.

Both sides have claimed victory in the conflict. Israel claimed it has eliminated the Hamas leadership and destroyed their rocket sites, breaking their war making potential. Hamas has claimed a moral victory by staving off an attack, drawing attention once again to the Palestinian cause and more importantly projected Israel as the villain of the piece for its high-handedness.

Israeli airstrikes are said to have eliminated over 150 militants – including the Islamic Jihad commander Hussam Harbeed, and the Hamas military chief Mohammed Deif. They also claim to have destroyed most of the underground rocket sites. And although the ground invasion by Israel did not materialize, they used a very effective deception plan by circulating misinformation of an impending invasion in the media and social media networks. This forced Hamas to move their rockets and cadres into hiding into ‘The Metro’ – a warren of underground caves and tunnels – where they were targeted by a concentrated strike of over 160 aircraft. It was a ruse that needs to be studied carefully by military thinkers.

Yet, the greatest gains which Hamas can claim is that it has frayed the process by which Israel was slowly getting acceptance in the Arab world. Under the Abrahams Accord, engineered by the Trump administration, the Arab states – UAE, Bahrain, Morocco and Sudan had given it recognition. Saudi was all set to join ranks. That accord was designed to bring together Israel- Saudi – UAE against the belligerence of Iran and balance its growing clout in the region. Arab states – especially Saudi, may not be so eager to embrace Israel now, and this in itself could affect the calculus of the Middle East.

The fraying of the Israel-Arab rapprochement is good news for Iran. It has an axe to grind and is still seething with resentment at the way Israel has sabotaged its nuclear program. Though weakened by sanctions, it now has a chance to reassert its influence in the Middle East through its proxies – Hamas and Hezbollah. It could use them to intensify actions against Israel and this present conflict could well be a prelude to a larger Israel – Iran confrontation.

The Islamic world has also come together with the OIC calling a special meet on the issue. However, this time it is Turkey, Pakistan and Malaysia which are spearheading the issue, and not Saudi and UAE. This is indicative of the power tussle in the Islamic world where the hardline Islamic states are trying to take over the leadership mantle of the OIC from the moderate states of Saudi and UAE.

There is another angle that is emerging. While Israel has traditionally curbed the Palestinians and treated them like second class citizens, they comprise 21 percent of Israel’s population. There are five million Palestinians and this emotive issue has brought them out on the streets again. For the first time in decades there have been Jew – Arab riots and the torching of each other’s places of worship. This has revived the specter of another Intefeda – not just in the occupied territories but within Israel itself. The Palestinian cause had been slowly abandoned by most of the world, and the ‘two-state solution’ which they have hankered for, is no longer being talked about. But it may lead to some easing of restrictions, and perhaps even a temporary pause to the development of Jewish kibbutzes in the occupied territories – which is one of the roots of the present-day problem.

With world focus back on West Asia, Prime Minister Netanyahu may have to ease his ‘no-solutionism’ approach to the Palestinian issue and perhaps engage them once again. He himself has been given a political lifeline. Israel has gone through an unprecedented four elections in two years, and he was likely to lose his chair. This crisis may extend his stay and project him as a strong decisive leader. Similarly, Hamas will use this ‘victory’ to establish ascendency over Fatah – its rival that controls the West Bank. Elections for the Palestinian Authority are due, and should they be able to establish their authority in both the West Bank and Gaza, their hardline approach could well lead to further problems for Israel. With the growing influence of Hamas, Iran too has been given a platform to exert its influence in West Asia. And these small battles could well be a pre-curser to a major war in the Middle East – a conflict between Iran and Israel.

India has traditionally supported humanitarian values, but real politic demands that it stand steadfastly behind Israel, which has been a staunch supporter and a dependable arms supplier. We have to walk a thin line and maintain our national and strategic interests while still expressing humanitarian concerns.

The USA – another major stake holder – will want to retain its influence in the Middle East. And for that an Israel- Saudi- UAE coalition is the best answer to counter  the rising power of Iran.  Perhaps they could undo the damage to Israel – Arab rapprochement by urging Israel to ease its hardline policies and address the concerns of the Palestinians. This eruption is an indicator that though its focus has shifted to the Indo-Pacific, the USA cannot take its eye of the ball in West Asia. Else it could cede influence there to Russia and China as it has in other parts of the world.

The ceasefire at the end of this round of fighting is just a temporary reprieve. Till a permanent solution is found, the Middle East will continue to simmer. Though a two-state solution is almost dead, Israel can be urged to ease the blockade of the Gaza strip, stop further Jewish settlements in the occupied territories and ease restrictions on the Palestinians living inside Israel. That may provide a healing touch and perhaps lead to a temporary measure of normalcy and peace. At least till the next conflict erupts in this contentious region.