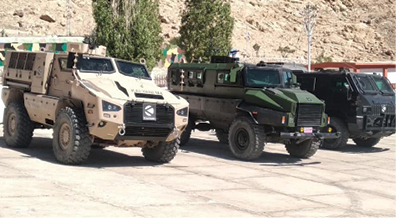 An exposition of the initiatives of the Kalyani Group a multinational conglomerate which has contributed significantly towards India’s quest towards self-reliance in defence. They have the technological capabilities and produce indigenous solutions in the field of defence technology. However, not resting on their laurels, they are earnestly endeavoring to indigenize all aspects related to defence manufacturing – design or technology, manufacturing capability & infrastructure and maintenance & life cycle support

The Hon’ble Finance Minister in her announcement in May 2020 included ‘Defence Manufacturing’ in the list of identified champion sectors which are expected to become the cornerstones of India’s burgeoning growth story. With emphasis on simplification, delegation, reduced timelines and making the process industry friendly, a slew of measures have been announced by the government over the last few months which are expected to remove inertia and give a new lease of life to the private industry participation in this sunrise sector which hitherto has been ruled by DPSUs and foreign companies.

One such prominent private sector name in the Indian Defence and Aerospace industry is Kalyani Group. The multinational conglomerate with market-leading presence across critical sectors such as Engineering Steel, Automotive, Industrial, Renewable Energy, Urban Infrastructure and Specialty Chemicals, is slowly and steadily becoming a reckoning force in this high profile sector.  The fulcrum supporting this progression is the group’s flagship engineering and manufacturing behemoth, Bharat Forge Limited (BFL). A technology driven global leader in metal forming, it offers full service supply capability to its geographically dispersed marquee customers across several sectors. Combining its competencies in engineering, design and technology, with best-in-class, world-scale manufacturing capacities have transformed the over 50 years old BFL from a component supplier to an innovation led, end-to-end solutions provider and a dynamic partner to its customers.

Venturing into new processes and technologies, while experimenting constantly, has been the group’s core strength. Having proven its capabilities in automotive and industrial sectors, the group set its sight on defence sector in 2011 and has, within a short time, become a name to reckon with in India’s defence circles.

Over a period of about eight to nine years the Group has created a considerable portfolio, which spans across Artillery Guns, Protected Vehicles, Air Defence Solutions, Ammunition, Small Arms and Defence Electronics.

Backed by several decades of experience in metal forming, forging, machining and metallurgy, the group has realized major breakthrough in Artillery segment within a short frame of time. An end-to-end solution provider, their indigenously designed, developed and manufactured product profile includes a series of 155mm/52/45/39 cal and 105/37cal guns. Among these are ultra- light howitzers, mounted platforms, and of course the star product – 155mm/52 cal ATAGS. ATAGS, a DRDO product co-developed by Kalyani Group has performed extremely well in all its trials and has demonstrated its superior consistency, accuracy and range. Inching towards its final stages of user trials, it is a robust battlefield solution which is poised to become the backbone of Indian Artillery in future. Through their journey of developing this impressive Artillery profile, the group has acquired and developed all kinds of soft skills and hard skills of Artillery technology. They have all the knowledge about the metal, the metallurgy, the ballistics, the pressure curves in the barrels, the structural force, the recoil pressure that comes on the gun and the system architecture. Kalyani Group has both – the technology and technology understanding, which gives them a clear edge and makes them the pioneers of Artillery in the country.

Along with Artillery, Protected Vehicles segment is also the mainstay of Kalyani Group wherein the group has an equally impressive portfolio. Based on three principles – ‘Provide best Lethality, with off road Mobility and optimum Protection’, the group has a vast product profile consisting of vehicles like the Armoured Personnel Carriers, Armoured Troop Carriers, Light Bullet Proof Vehicles, Light Strike Vehicles, etc. Many of these vehicles have been successfully inducted by Indian Army and armies of friendly countries.

In the field of ammunition, the group has a successful history of being a long time supplier of ammunition empties to the Indian armed forces having supplied over 2 million ready to fill shells – from 81mm to 155mm. They also export 70mm empty rocket heads and bomb bodies. Along with these regular ammunition, Kalyani Group is now focusing on special ammunition like FSAPDS and are the manufacturing partner to DRDO for their indigenously developed 120mm FSAPDS Mark II. It is the first time in India that a private sector company has successfully manufactured any FSAPDS. In fact, Kalyani group manufactured 120mm FSAPDS Mark II was successfully test fired in Sep 2020 attesting their first-time right record.

In Air Defence and Small Arms, the group has partnered with leading global OEMs to bring in niche technology to the country. The group is now gearing up for entry into additional fields of Marine products (with primary focus on propulsion systems), small Jet Engines, Product improvements/upgrades, etc.

Technology and innovation have been the cornerstones of Kalyani Group story and they have always believed in the power of advanced research in enhancing capabilities. For this they have invested in creating specialized defence technology centres – two in Pune, one in Bangaore and one in Hyderabad. The ones at Bangalore (for Jet engines) and Hyderabad (for RF Seekers) are purely for defence. The ones at Pune are Kalyani Centre for Technological Innovation (KCTI) and Kalyani Centre for Manufacturing Innovation (KCMI). These two cut across the complete portfolio for Kalyani group companies. This robust R&D ecosystem has been further boosted by acquiring stake in defence start-ups which the group has done over the last two years. The aim is to imbibe technologies and build competencies in Augmented Reality (AR), RF Systems, INS, Artificial Intelligence and Data Analytics, etc.

The group has world class defence manufacturing infrastructures at Pune, Hyderabad, Satara& Mysore. The Advanced Gun Manufacturing plant at Pune is one of its kind in the country producing compete ordnance of an Artillery gun at a single location. They are now in the process of setting up in a new facility in Jejuri, on outskirts of Pune – a complete manufacturing set up which should come into steam in another year. These fungible manufacturing facilities augmented by Internet of Things (IoT) and Industry 4.0 excellence standards enable Kalyani Group to seamlessly integrate technology with customers and ensure sustained new product development. It is well known that in terms of manufacturing capabilities on the mechanical side, they have the best technology available in terms of metallurgy, metal forming, and machining. The group is now setting up manufacturing facilities and competencies for defence electronics to include microwave & RF seekers.

Overarching the principle of ‘Atmanirbhar Bharat’, the Group has renewed its motivation to strive for increased indigenization. Towards this, they are now focusing on indigenous development of critical technologies like Aero Engines, special Ammunition like FSAPDS, weapons control systems (WCS), Command & Control Systems (CMS), high-end Turbo chargers, Artificial Intelligence based solutions and specialized Defence Electronics solutions. To deliver these solutions, they are continuously enhancing their engineering expertise, integration advantage, and innovation capabilities. The Group is also partnering with global majors that can offer complementing capabilities to further their purpose of developing and manufacturing next-generation weapons and defence systems.

Kalyani Group has invested sizeable resources and created requisite infrastructure to develop technological capabilities and produce indigenous solutions in the field of defence technology. The ultimate aim is to indigenize all three aspects of any defence manufacturing – design or technology, manufacturing capability & infrastructure and maintenance & life cycle support. Taking small steps at a time, Kalyani Group is diligently carving a path towards success in this critical field, which is bound to translate into a giant leap for the country and its defence ecosystem.