Lest we Perish: CBRN Incident Management

Sub Title : CBRN threats, both accidental and intentional, are for real in today’s world 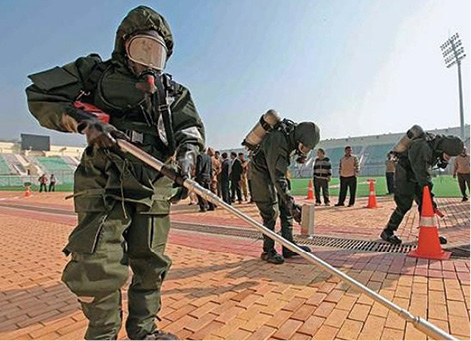 Chemical, Biological, Radiological and Nuclear (CBRN) security is a matter of grave concern for most nations today. CBRN security in India is still in its nascent stages. There is a need to look at it from a broader perspective of internal and regional security challenges that manifest in the form of CBRN terrorism, among others.

CBRN emergencies occur as a result of occupational exposures, fires, explosions, release of toxicants and warfare, and are caused either by ignorance, negligence, incompetence, accident or malicious intention. Such incidents would instil  panic and fear, in the population affecting their health and morale. The impact is multipronged – physical, psychological, economical, and social. CBRN threats can be natural or manmade. It is the manmade threats that are of concern and need to be addressed.

The March 2018 nerve agent poisoning of Sergei and YuliaSkripal in the UK and the public poisoning of Kim Jong Nam at a crowded Kuala Lumpur airport terminal in February 2017 raise fears of similar threats on a larger scale  to the general public as well.

In most developing nations, including India, issues like poverty, lack of health infrastructure, conflict situations, unstable governments, lack of good educational facilities, ignorance of/or inability to provide adequate safety measures are issues that would have an impact. Growing industrialisation, increased imports of chemicals and machinery, coupled with lack of or non-stringent regulations on customs, safety and transportation of these leads to huge gaps in securing these assets. Waste management of toxic and hazardous substances is another shortcoming. Awareness of CBRN threats and risk mitigation measures is necessary at all levels. There is an urgent need to educate and train all concerned stakeholders in CBRN risks and threats and the need to adopt risk mitigation measures.

The NDMA is mandated to deal with all types of disasters, natural and man-made (including CBRN disasters). Whereas, other such emergencies including those requiring close involvement of the security forces and/or intelligence agencies such as terrorism, law and order situations, serial bomb blasts, hijacking, air accidents, mine disasters, ports and harbour emergencies, forest fires, oil field fires, and oil spills will continue to be handled by the extant mechanism i.e., National Crisis Management Committee, the Government of India has earmarked nodal ministries for CBRN disasters and incidents as under :

The NDMA has issued 22 Guidelines for various types of disasters (natural and manmade) and their management.  These cover aspects of  CBRN related attacks and disasters, psycho-social support, incident response and medical preparedness.

While there is no overarching law which covers CBRN as a whole and addresses all related aspects, there is a gamut of administrative, regulatory and legal arrangements obtaining in India which aid CBRN risk mitigation.  These acts and laws complement the Disaster Management Act 2005, Weapons of Mass Destruction and their Delivery Systems (Prohibition of Unlawful Activities) Act, 2005 (The WMD Act 2005) and the Chemical Weapons Act 2000 towards effective CBRN Incident Management in India. In fact, India has a very comprehensive coverage of legal instruments for all aspects of CBRN incident prevention, control, response and mitigation.

Much work has been done in the field of Radiological and Nuclear safety and security. Even disease control is quite effective in India. However, India does not have a National Registry of Chemicals and has not completely implemented the Global Harmonised System (GHS) of Classification and Labelling of Chemicals.

The Indian Government has given reasonable thought to disaster management aspects relating to CBRN threats.  It has instituted a number of measures to deal with CBRN disasters.  Salient ones are :-

Core trainers of these NDRF CBRN teams have been specially trained by the Indian Army at Faculty of CBRN Protection, College of Military Engineering (CME), Pune and various other CBRN establishments in India and abroad. Presently, most of the CBRN Training for Central Police Organisations (CPO) is conducted at National Industrial Security Academy (NISA) Hyderabad.

The first question that is asked when we mention CBRN risk mitigation and prevention as regards India is, ‘are we adequately prepared?’ Listed below are the main shortcomings that ail India’s preparation for CBRN incidents.

Keeping the many shortcomings and weaknesses in mind, there is a dire need of changing and revising the Governance structure, nodal agencies for CBRN Crisis and Consequence management and response mechanisms for CBRN incidents.

CBRN threats, both accidental and intentional, loom large over India. It is imperative that we prepare for such threats in earnest and empower ourselves, the polity, administration, law enforcement and the public at large to prevent and respond optimally to these.