Sub Title : The new weapon in naval and coastal warfare 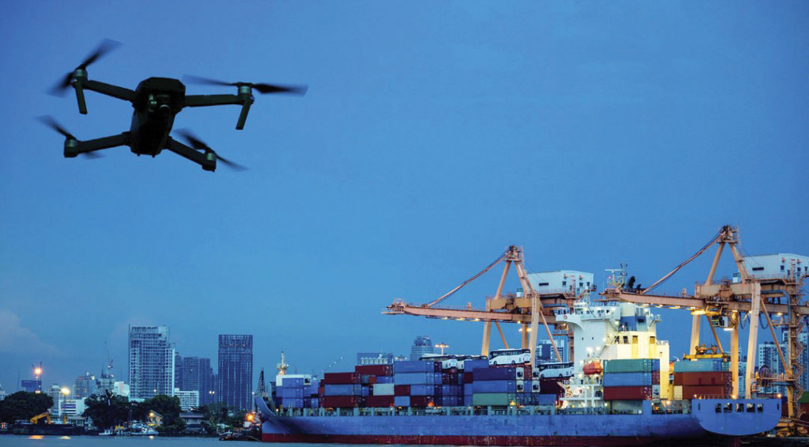 Loitering munitions are the new weapon in naval warfare. There is no gainsaying that  in the near future the skies at sea and coastal areas will feature smart drones and smart loitering munitions which would throw up complex challenges. The tactics and systems required to tackle them have to be geared up accordingly

A tour de horizon of the global maritime strategic landscape suggests that there are currently two geographic spaces witnessing geopolitical and geostrategic contestations. First, in the western Pacific Ocean viz the South China Sea –Taiwan maritime space. This  is emblematic of great power competition involving the United States and China. The PLA Navy has aggressively postured against Taiwan including numerous instances of Air Defence Identification Zone (ADIZ) violations that have kept the Taiwanese military on a very high degree of operational readiness. On its part, the US Navy has deployed aircraft carriers in the region, relentlessly conducted Freedom of Navigation Operations (FONOP), and challenged the PLA Navy in its backyard, i.e. the Taiwan Strait. Furthermore, its alliance and strategic partners, particularly the Quad Member navies, have conducted manoeuvres targeted against China. In essence the waters, off and around South China Sea–Taiwan, have a lot of adversarial activity and thus have the potential for hostile actions even if not a full scale conflict.

Secondly, the maritime spaces in the Eurasian region have witnessed high intensity naval warfare involving the Russian and the Ukraine navies. Although the Russian Navy is more powerful in terms of numbers and quality, the Ukrainians naval forces were successful in sinking Moskva, the flagship of Russia’s Black Sea Fleet, after it was hit by Ukrainian anti-ship missiles. The Ukrainian Navy has suffered numerous losses (sinking/scuttling/capture) and is highly depleted. Ironically, Romanian Navy minesweeper Lieutenent Dimitrie Nicolescu was damaged after it hit a sea mine.

And now, during the last few days, unmanned platforms have made debut in the Eurasian waters, and Ukrainian and Russian navies have targeted each other’s naval platforms. First, Ukrainian unmanned surface vessels (USVs) and unmanned aerial vehicles (UAVs) conducted a successful attack against the Russian Black Sea Fleet in the Pivdenna Bay. It is close to Sevastopol naval base, Russian Navy’s main base in the war, as also the home port of the Black Sea Fleet. Apparently, the unmanned platforms may have even got close to a Kilo-class submarine that was reportedly berthed in the Pivdenna Bay. As expected, the Russian Navy responded with a counter attack. The attack involved the use of Lancet drone, a loitering munition, which struck a Ukrainian Gyurza M class gunboat. By all accounts, the vessel was “stationary, and its engines appeared to be at stop status, and the Lancet drone struck the ship from the port side”.

This was the first time that a loitering munition has been used in the Russian Ukrainian war. The successful attack against Ukrainian Gyurza M class gunboat by the Russian military by using loitering munitions has added a new dimension to naval/coastal warfare. RIA Novosti notes that the “Lancet is designed to operate primarily via man-in-the-loop control and transmits video from its onboard targeting system to its controller via line-of-sight data link” According to reports, since August 2022, Russia acquired over 2,400 Shahed 136 loitering munition systems for use  against Ukraine.

As the name suggests, loitering munitions have the distinct ability to wait/loiter in the air for an extended period of time. This provides the controller time to correctly identify, conduct a strike with precision, as also abort an attack. Besides, its “self-destructive capabilities” make it unique. Loitering munitions first appeared in the 1980s and were meant for the Suppression of Enemy Air Defenses (SEAD) role against surface-to-air missiles (SAMs). These soon became popular among many militaries and came to be used against armored vehicles, artillery, bunkers, and command and control stations. In this context, an Indian military analyst argues that loitering ammunitions or Kamikaze Drones, “enable much faster reaction against hidden targets that emerge momentarily or for brief periods. Furthermore, their “longer range and longer loiter time miniature versions” are useful in tactical support roles”. In their miniaturized form, these could “fit into the backpack of frontline soldiers”. It is important to mention that loitering munitions “fill a gap between cruise missiles and unmanned combat aerial vehicles (UCAVs)” although they have “several characteristics of both”. Besides they are cheaper and cost effective.

India is in the process of building an armoury of loitering ammunitions. Earlier this year, the Indian Army acquired over 100 Warmate Micro Loitering Munitions from Poland. A twitter post by Vayu Aerospace Review notes that the “Warmate is a self-contained system which can be carried by land forces or Special Forces” and is a “good alternative to anti-tank missiles ” It is credited with 30 kilometers range, altitude 300 meters and 5.7 kilogram payload (high explosive and thermobaric)” which can be “effectively used against enemy forces and lightly armoured vehicles”.

Meanwhile, the indigenous development of loitering munitions has also taken roots and supports the national mission of building the domestic defence sector which, among other issues, is  based on the premise that “Foreign weapons and systems come laden with software and hardware trojans,”

The Defence Research and Development Organisation (DRDO) has been liberally transferring “niche defense technologies to industries” and has “ entered into more than 1,430 Transfer of Technology [ToTs] agreements with industries all over the country, out of which a record number of around 450 ToTs have been signed in last two years,”

Among many such initiatives and success stories, the Economics Explosives Ltd (EEL), a subsidiary of Solar Industries India Ltd, and Z Motion Autonomous Systems Pvt Ltd, Bangalore have produced three varieties of loitering munitions i.e. LM0, LM1, and Hexacopter. These were tested in April 2022 in Nubra Valley area of Ladakh – “While LM0 and LM1 achieved full endurance of 60 minutes, the hexacopter did a 30 minute flight, making it the first time in the world that  Man-Portable Loiter Munitions with 4 Kg warheads were successfully tested at a flight ceiling of 4500 m, thanks to the facilitation by Army Design Bureau,”

The LM0 is a hand-launched loitering munition, while the LM1 is launched through a tube or a catapult. These munitions are a cheaper alternative to armed drones. The company claims that “these products are having more than 80 per cent indigenous contents and will meet global quality and safety standards.

It is well known that unmanned aerial platforms such as drones and loitering munitions are popular among the militaries and are deployed for surveillance and reconnaissance as also for combat operations.  In this context, Azerbaijan’s creative use of loitering munitions destroyed hundreds of Armenian tanks and this changed the outcome of the war. These are also in the inventory of non-state actors and serve as a

“low-cost solution for sabotage and interference”. In 2018, drones strapped with small rockets attempted to attack the Hmeimim air base, Latakia and the Russian naval base at Tartus, both in Syria. In 2019, over two dozen drones in multiple waves from multiple directions had attacked Aramco oil processing facilities at Abqaiq and Khurais in Saudi Arabia completely defeating the powerful Saudi air defences.

It is to be noted that loitering  munitions, when operating in swarms, form a lethal force. Also, the advent of intelligent and smart loitering munitions (backed by software, rather than human operators) which operate autonomously and make targeting decisions present new challenges for their use from the International Humanitarian Law point of view as they cannot make a  distinction between civilians and combatants. The law protects civilians during war (Protocol I, along with the Fourth Geneva Convention). Further, “Attacks that strike military objects and civilians or civilian objects without distinction are considered indiscriminate and are prohibited”.