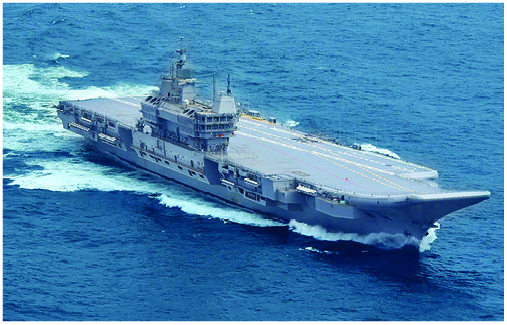 Atmanirbharta does not denote import substitution. The thrust  has to be on self-reliance rather than self-sufficiency as it  promotes both ‘Make in India’ endeavours as well as indigenisation ones. In this regard the Indian Navy’s indigenisation drive is a success story worthy of both consistent praise and emulation across an impressive range of naval capabilities, incorporating inductions and acquisitions as well as capacity-building and capability-enhancement for both, the domestic requirement as well as the export one

A question that often arises in the collective mind of India watchers in general and the global strategic community is just what India’s periodic statements of ‘vision’ mean, particularly because these are often aspirational statements that are originally articulated in Hindi and then have much of their nuance lost in translation into other languages, most especially English. The clarion call to all Indian societal structures to create an Atmanirbhar Bharat is all the rage at the present juncture and would appear to have taken over from the ‘Make-in-India’ mantra that was being chanted with equal fervour, accompanied by matching hype and hoopla, only a few short years ago (September 2014 to be precise).  However, the current articulation of Atmanirbhar Bharat is actually part of a natural Indian progression — a logical broadening of the 2014 campaign which had sought to encourage the global manufacturing sector to perceive India as an opportunity rather than a risk. It invited global manufacturing ‘majors’ to set-up shop (so to speak) in India and, in so doing, transform the country into a global design-and-manufacturing hub. Yet, in both, the 2014 call to ‘Make-in-India’ and the present there is much that has been “lost in translation” — as the aphorism goes.

Given that these slogans are the product of sophisticated but largely Hindi-thinking and Hindi-speaking minds, once they were translated into the English language, it was (and is) quite unsurprising to find that they created, particularly amongst the English-speaking lay public, a fair degree of misunderstanding. In 2014, there was discernible confusion between the terms ‘Make-in-India’ and ‘Indigenisation’. The fact is that the former was meant to encourage largely-foreign major manufacturing-companies to set-up manufacturing-units in India – whether for consumption by the Indian market itself or for export from India to markets in other countries. As such, its principal aims were job-creation, skill-development, and the transfer and absorption of cutting-edge manufacturing-technology and management-techniques. ‘Indigenisation’, on the other hand, is, perhaps, better described by the less well-used slogans, ‘Make-by-India’ or ‘Make-for-India’.  In short, ‘indigenisation’ involves Indian industry manufacturing products and processes that would otherwise have had to be imported by India. Fast forward to 2020 and the call for an Atmanirbhar Bharat. An admittedly small number of economists and analysts have since pointed out that atmanirbhar can be translated either as ‘self-reliance’ or as ‘self-sufficiency’. Different levels of the bureaucracy have applied their own interpretation as to which is the meaning that is denoted by the adjective atmanirbhar, adding to the policy-level confusion. ‘Self-sufficiency’ is what India tried through the three economically-challenged decades between the 1950s and 1970s, wherein India could manage only a 3.5% rate of growth — derisively called the “Hindu Rate of Growth”. This term was coined in the late 1970s by Professor Raj Krishna, who had argued in one of his lectures that “..no matter what happens to the economy the trend growth rate in India will be 3.5%”.  A few economists later took the statement completely out of context and sought to link the low growth-rate of this period to Hindu beliefs of “Karma” and “Bhagya”. In any event, the average per capita income grew by a mere 1.3%. The country’s birth-rate, however, continued to be high, with the net result that 30 years after Independence the number of poor people had nearly doubled. Nevertheless, some bureaucratic echelons have taken atmanirbharta to denote import-substitution. Clearly, this is the wrong approach, as may be readily shown by the fact that contemporary India has the fourth largest petroleum-refining capacity on the planet, and our largest single export is petroleum-products. Of course, our single largest import commodity, too, is petroleum (crude oil). If we were to slavishly promote the wholly incorrect meaning of atmanirbharta and reduce our import, we would be cutting off our collective nose to spite our face because this would have an adverse and severe impact upon our exports, with consequent reduction in the GDP. If, on the other hand, atmanirbharta were to be accepted as denoting ‘self-reliance’, India would endeavour to be strong enough to import what was necessary and inescapable, add value to whatever the country imports, and then export these value-added products.

This thrust on ‘self-reliance’ rather than ‘self-sufficiency’ does, indeed, promote both, “Make in India” endeavours as well as indigenisation ones, as has been amply and repeatedly shown by the Indian Navy.  The navy’s indigenisation drive – launched in the 1960s — has, over time, matured into a success story worthy of both consistent praise and emulation across an impressive range of naval capabilities, incorporating inductions and acquisitions as well as capacity-building and capability-enhancement for both, the domestic requirement as well as the export one. Contrary to what some profess, the two are not mutually exclusive. The fact that the Indian Navy’s ‘Directorate-General of Naval Design’ (DGND) has generated as many as 19 different warship-designs, leading to the construction of a staggering 122 surface and sub-surface combat-platforms (i.e., ‘warships’ and ‘submarines’) in Indian shipbuilding yards is, by any standard, a track-record of which to be proud. However, even more impressive have been the Navy’s successes by way of the indigenous development, production and deployment of a whole slew of systems and sub-systems that go into the ‘float’, ‘move’, ‘fight’ and ‘survive’ capabilities of modern naval combatants and are now being exported with the tag “world class”. These incorporate surface and subsurface propulsion systems, power-generation systems, and, state-of-the-art weapon-sensor suites — all of which, taken in aggregate, have made the Navy’s ships, submarines and aircraft, both admired and respected.

Predictably, the Navy’s indigenisation endeavour has yielded incrementally richer dividends, to the great benefit of industry as well as the nation. As things currently stand, Indian shipyards have as many as 39 indigenously designed surface and

sub-surface warships in various stages of construction, of a current induction figure of 41 ships and submarines.

In recognition of the criticality of the PPP-model and guided by the recommendations of the ‘Dr Vijay Kelkar Committee’ that had been set-up to look into the issue of private sector participation in the defence industry, the Navy has taken a number of measures to optimise the potential created by the growing capability of Indian Industry coupled with the shift in Government policy to allow for private partnership in the defence sector. Regular buyer-seller meets and vendor-development programmes are being conducted by nodal organisations within the Navy. The procedures involved in registering as defence vendors are being tweaked to make them both simple and transparent and if the industry is able to adhere to the specifications that are needed and deliver the desired products at competitive prices, there is immense scope for collaboration for mutual benefit.

In 2006, the Indian Navy set-up a nodal ‘Directorate of Indigenisation’ (DOI), and has, over time, incorporated this organisation into a wider and far more focussed one that concentrates upon both, indigenisation and innovation, as the following schematic depicts:

It is noteworthy that this roadmap affords requisite centrality to India’s MSME sector. In the medium term, conventional maritime conflict under the India-Pakistan-China nuclear overhang is very likely to be time-compressed and ‘Special Ops’-intensive. There is much that the MSME Sector can achieve here: paper-batteries to power hand-launched ‘micro-UAVs’; camouflaging of the ends of GPS-trailing-wire antennae for use in specific environments (such as the creek areas of Gujarat and Sindh or the swampy areas of the Sundarbans); electrical high-speed outboard motors (OBMs) and noise-cancelling/ 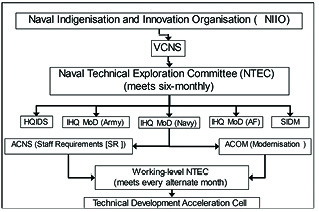 sound-blanking solutions for two-stroke and four-stroke IC-engine OBMs; portable power-ascenders for boarding operations, amphibious raids, etc.; ‘Low Observable Technology’ semi-submersible craft; diver-scooters and diver-propulsion vehicles; image-recognition software that can provide ‘suspicion-indicators’ (such as a fishing-vessel not conforming to the local design or layout, or, a trawler streaming demersal-fishing gear but operating in the deep waters off our east coast); etc.

Yet, not everything can or should be produced indigenously. At the high-end of warfighting capabilities, Indian industry is increasingly entering into a number of new and exciting partnerships with global players on the one hand and the Indian Navy, on the other. The stark truth in terms of self-reliance is that there is room for all three facets — imports, value-addition, and, exports.  The Navy’s relentless drive for self-reliance has already yielded impressive and encouraging results in a number of critical war-fighting areas. Obvious examples include major systems required for aircraft carrier operations, such as Electro-Magnetic Launch Systems (EMALS), arrestor-wires and aircraft-lifts; air-cushion landing craft (LCAC) for deployment from Landing Platforms [Dock] (LPDs); Air Independent Propulsion (AIP) systems, super-cavitating torpedoes, electromagnetic rail-guns, hyper-velocity projectiles, blue-green lasers, ship-borne anti-ballistic missile systems, etc.

The number of success stories are impressive by any standard. The range of Electronic Warfare Suites such as the revamped ‘AJANTA’, as also the ‘ELLORA’, ‘KITE’, ‘HOMI’ and ‘PORPOISE’, all of which are fitted on the Navy’s latest frontline surface, airborne and subsurface combatants, and which are designed to detect the presence of enemy combatants without disclosing one’s position or identity, are certainly success stories of which we can be justifiably proud.  It cannot be averred that they are without any import components, but the value-addition and export-potential are entirely Indian.  The same is true of the Navy’s advanced underwater-sensors such as the APSOH, HUMSA NG and USHUS family of sonars that have been developed by the Naval Physical and Oceanographic Laboratory (NPOL), Kochi.  Likewise, an indigenous state-of-the-art electro-optical Fire Control System (FCS) the ‘EON 51 Mk II’, designed by IRDE, Dehradun, and productionised by BEL, is now a standard fit. Pitching-in directly with its own formidable developmental expertise, the Navy’s WESEE (Weapons and Electronics Systems Establishment), along with the Centre for Development of Telematics, has rendered yeoman service to the overall effort at self-reliance through its series of world-class ‘Combat Management Systems’ (CMS), ‘Integrated Machinery Control Systems’ (IMCS), ‘Integrated Bridge Management Systems’ (IBMS), ‘Integrated Propulsion Management Systems’ (IPMS), and ‘Battle Damage Control Systems’ (BDCS), which now equip all major classes of the Indian Navy’s warships. Then there are state-of-the-art data-link systems (LINK-II Mod 3), that are now being manufactured by Bharat Electronics Limited (BEL). These form the heart of the entire C4I2SR set-up on board most classes of the Navy’s frontline warships. Likewise, the indigenously designed and developed ‘REVATHI’ three-dimensional ‘Central Acquisition Radar’ (CAR), which is installed aboard the Kamorta Class Anti-Submarine Warfare (ASW) corvette is a good example of the rapidly-growing ‘Public-Private Partnership’ (PPP) in defence production. The design and production of this radar has been undertaken through a collaborative effort between the Navy, the DRDO and M/s L&T, Mumbai.  The successful leveraging of Navy-designed IT networks and IT-security platforms stands in sharp contrast to the grave concerns often expressed in respect of the country’s remaining critical infrastructure. Even outside of ‘equipment’, there is much to cheer about. The Defence Metallurgical Research Laboratory (DMRL), Hyderabad, in collaboration with M/s Steel Authority of India Ltd (SAIL), and with active participation from the Indian Navy, has successfully undertaken the indigenous development and production of warship-grade ‘DMR249A’ steel plates and bulb structural sections for ship and submarine applications. This represents an enormous step in freeing ourselves from the yoke of pressures and prices associated with the import of steel, as was the norm until very recently. The results are evident (and will be increasingly so) in the construction of the Navy’s big-ticket platforms such as future aircraft carriers and the submarines that are to be constructed under ‘Project 75-India’.

To conclude, the Navy for one, seems to be quite clear that a slavish adherence to the chant of self-sufficiency will take the country down a dead-end street, and it is, instead, self-reliance that is the correct path for an Atmanirbhar Bharat.