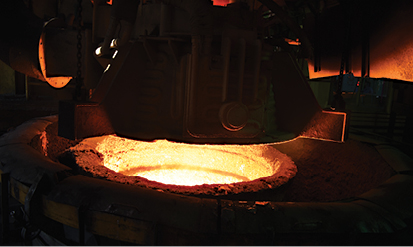 Steel,  an  alloy of iron and carbon is by far the most widely used material for building the world’s infrastructure and industries.  It is used to fabricate everything from sewing needles to battle tanks owing to its unique combination of durability, workability, and cost. There are more than 3,500 different grades of steel with many different physical, chemical, and environmental properties available today.

There are findings that suggest that iron was used as early as 4000 BCE. More and more iron findings were discovered later around 2700 BC, giving the period the name Iron Age. Iron replaced bronze because of its superior hardness which was particularly important in weaponry and tools.

Some of the early iron objects found in India date back to 1400 BCE. Perhaps as early as 300 BCE high quality steel was being produced in southern India. The first crucible steel was the Wootz Steel which originated in India.  Iron Pillar of Delhi erected during the time of Chandragupta Vikramaditya (375–413 BCE) happens to be the World’s first Iron Pillar. The swords manufactured in Indian workshops are mentioned in the written works of Idrisi, as Indian blades made of Damascus steel found their way into Persia. During the 14th century, European scholars studied Indian casting and metallurgy technology.

Maintaining the tradition, India today is the second largest producer of steel in the world. One of the major producers of steel, particularly the military grade steel is ‘Metal & Steel Factory‘(MSF), Ishapore.

Such integrated facilities for making, shaping & treating of Super-Ultra clean alloy steel-grades makes it possible to cater to any metallurgical need. Production of steel cartridge cases with deep drawing quality steel (HSLA Grade) for forming the finished product is a major strength of the factory. MSF happens to be the leader in this field.

The factory has its origin as part of Gun & Shell Factory at Cossipore – then known as “Foundry and Shell Factory”- in the year 1872, when metallurgical operations by way of melting and rolling of Cartridge Brasses were first taken up. Subsequently in the year 1892, manufacture of steel was taken up when open-hearth steel making furnace was commissioned. With this, the first authentic production of steel was introduced in India. The Steel Rolling Mills were installed later on, in 1896. Further expansion of metallurgical activities necessitated shifting of metallurgical plants to Ishapore.

Relocated to its new site at Ishapore in the Year 1905, the factory became an independent unit in the family of Ordnance Factories and came to be known as “Metal & Steel Factory, Ishapore (MSF)” in 1920.

MSF has been the cradle of military-metallurgy in India. The facilities & expertise available in carrying out development of products and investigation of failures by the attached inspectorate led to the formation of Technical Development Establishment (Metals) in the year 1951 which was upgraded in the year 1956 to the Defence Metallurgical Research Laboratory (DMRL) within its premises. DMRL was later on shifted to Hyderabad in the year 1963 after bifurcation into DMRL and CI (Metals)

Irrespective of the methods, producing iron is the very first step of making steel which involves melting of raw inputs like iron ore, coke, and lime in a blast furnace. The resulting molten iron which contains 4 to 4.5 % carbon is known as hot metal steel. As the quality of steel is determined at this very stage, stringent checks and precautions are taken at MSF to control  ingot heterogeneity.

The next step, which is known as primary steel making, involves the two primary methods – BOS and/or EAF. BOS adds recycled scrap steel to the molten iron in a converter. At high temperatures (1400 to 1600ºC), oxygen is blown through the metal, which reduces the carbon content to between 0 to 1.5 %. At MSF however, the present steel melting practice is through EAF-Ladle Furnace Vacuum Degasser [LFVD] system by a state-of-the-art 20 Ton EAF commissioned in 2015-16.

EAF method involves melting of recycled steel scrap by using high-power electric arcs (temperatures up to 1650C) to convert it into high-quality steel. The steel melting shop of MSF, Ishapore was earlier equipped with an EAF of 15-ton capacity with a 6.5 MVA transformer. Its capacity of production of liquid steel was about 10,000 tons per year. However, with a new EAF of 20/22-ton capacity which has been installed by MSF under its modernization plans, the capacity of liquid steel production is increased to approx 20,000 tons of steel per year.

To adjust the steel compositions, molten steel is processed by a secondary steel making method which involves treating of the molten steel. This is done by addition or removal of certain elements and/or manipulating the temperature and the production environment. At MSF, on completion of primary steel making, the molten steel is ‘tapped’ into a ladle where it is subjected to a number of different treatments, such as composition adjustments, stirring, degassing and reheating.

The vacuum treatment of liquid steel lowers the level of gases like hydrogen and nitrogen dissolved in liquid steel. This has a profound effect on all metallurgical reactions involving gases. Hydrogen, for example, is readily removed under vacuum to less than 2 part per million whereas nitrogen is not as mobile as hydrogen in liquid steel.  Specifically, maximum 2 ppm hydrogen is allowed for Sharang and Dhanush guns whereas 1.5 ppm hydrogen is allowed for Pinaka. However, in general maximum 70 ppm nitrogen is permitted for different types of artillery guns. As is well known, OFB makes155mm 45 calibre artillery gun systems indigenously.

In the next stage, tank degassers are used to remove other gaseous elements like carbon monoxide and sulphur. In the tank degasser, the ladle which is connected to vacuum pumps, often consists of two or three mechanical pumps, which lower the pressure to about 0.1 atmosphere, and four or five stage steam ejectors, which bring the pressure to under 0.0013 atmosphere with a treatment time about 20 to 30 minutes.

The process of casting steel can be achieved through several ways. However, the simplest way to solidify liquid steel is through ‘Ingot pouring’ i.e. to pour liquid steel into heavy, thick-walled cast iron ingot moulds.  The casted steel is then transformed into various shapes as per the requirement. This is followed by solidification or primary forming, often achieved by the hot rolling processes which help in achieving the required shape and surface quality.

Finally, the steel thus produced is processed through different finishing processes like joining, coating, heat treatment and/or surface treatment to prepare the end product of the desired specifications. Close control of all factors, starting from steel melting to the final heat-treatment, is required in order to meet the stringent specifications required of military grade steel for different applications.

Metal and Steel Factory is a constituent part of the Ordnance Factory Board, Ministry of Defence, Government of India. It makes value added specialised steels for weapon systems as also for civilian applications.

The factory is as much proud of its contribution to India’s cause of self-reliance in defence as it is of its rich legacy and execellence in performance.