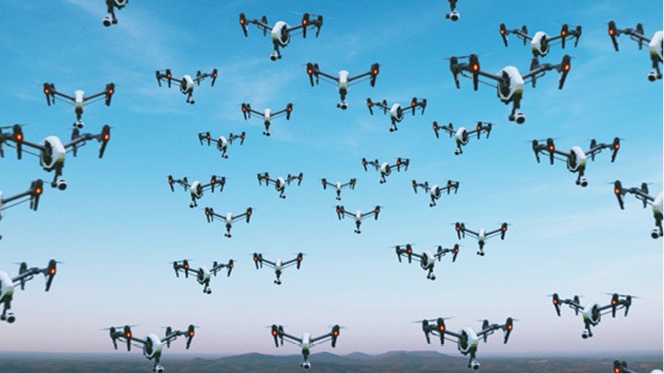 Although the concept of AD Guns seems to be outdated prima facie, it still proves to be one of the most effective weapon systems for terminal air defence and in case of an EW scenario

Air Defence in 21st century is no longer restricted to protection of Vulnerable Areas/ Vulnerable Points (VAs/VPs) against conventional ground attack aircraft and helicopters but it also incorporates protection against non-conventional pilotless aircraft i.e. Unmanned Aerial Vehicles (UAVs) and Unmanned Combat Aerial Vehicles (UCAVs). These pilotless aircraft can be of varying sizes ranging from a mini drone to an actual bomber aircraft. In today’s era when the use of such aerial platforms is on the rise, the Air Defence warriors of the country need to be prepared and well trained to counter this multidimensional threat.

The vision of UAVs for air operations started immediately after World War II. Heavy casualties among Air Force pilots made people think of alternatives. But the effective use of UAVs for military air operations was first made by the United States in Afghanistan after 9/11 in the year 2001. It was then that drone strikes on terrorist shelters by Predator UCAVs of USA brought the new dimension of air threat in front of the world. Since then, almost all the major militaries of the world have procured/developed UAVs and UCAVs to carry out various types of air operations, which till then were performed by conventional piloted aircraft. There is also considerable development in the field of space-based weapons wherein satellite launched missiles will be used to destroy targets. This is a new dimension to air threat. Apart from this, the threat from ballistic missiles has always been a major air threat ever since their development.

UAVs and Drones. An unmanned aerial vehicle (UAV), commonly known as a drone, is an aircraft without a human pilot aboard. It is generally controlled remotely by a person sitting at a distance from the place of the flight. The combat version of UAV used to carry out combat air ops like bombing of ground targets etc. is known as Unmanned Combat Aerial Vehicle (UCAV). There are different classifications of UAVs based on their size, endurance, purpose and altitude of flight. The most common types of UAVs used in militaries based on their purpose are Reconnaissance and Combat UAVs. Although these weapons of war have not been used extensively in conventional wars till now, today all the major military powers of the world have got the capability to use these aerial platforms in future wars. UAVs are usually categorized based on their weight, range, speed as well as their specific capabilities.

(a) Class I (< 150 Kg): Micro, Mini or Small Drones. There are several types of Class I drones that can be used for Computerized Command Control Communication & Information solutions to provide ISTAR that is Intelligence, Surveillance, Target Acquisition and Reconnaissance capabilities.

(b) Class II (150-600 Kg ): Tactical. Tactical UAVs are specially designed to be used at the organic battalion level or in Special Forces as assets for purposes of medium range surveillance. They have a vital role of filling the gap between the ranges of functions of the short-range micro-UAVs and the strategic UAVs, which comprise of the Medium Altitude Long Endurance (MALE) and High Altitude Long Endurance (HALE) UAVs. These drones achieve this by having a combination of flexibility, endurance as well as ruggedness. They have been of use for situation analysis and awareness, to offer protection and surveillance besides being used for target acquisition and damage assessment.

(c) Class III (>600 Kg): Strategic. Class III UAVs are usually referred to as MALE systems as well as HALEs. The MALEs are especially ideal for surveillance as well as reconnaissance of a non-threatening area. They have wide range of applications mainly being used to determine the position of the enemy or the movement of certain populations that are not involved in a conflict. They have state of the art infrastructure and they have also been used to compile lists of targets. Some renowned MALEs include the Reaper/Predator and the family of drones called Anka and Heron. One of the few HALEs available right now is the Global Hawk Family.

Mini UAVs. These are the small sized UAVs generally used for recce missions. They are rarely used in combat roles. Their compact size and reduced radar cross section makes them very difficult to be detected by most of the search radars. Another advantage is that they are very cheap and hence can be used in swarms at VAs/VPs. These UAVs are very difficult to be engaged by present Ground Based Air Defence Weapon Systems (GBADWS).

Ballistic Missiles. These are those surface-to-surface missiles (SSMs) which have the capability to destroy targets at very long distances. With a maximum range of few thousand kilometres, these missiles are also capable of carrying a nuclear warhead which can cause devastative effects at the target end. Most of the research and development of ballistic missiles took place during the Cold War and today there are a large number of such missiles with most of the countries which include adversaries in our neighbourhood as well. Ballistic missiles, due to their long range, heavy damage causing ability and supersonic speeds, continue to pose a challenge to the Air Defence of strategic VAs/ VPs. They can be launched from ship and land-based facilities.

Space Based Weapons. Aerospace is a dimension that may soon be added to the air threat. The use of satellite-based weapons can prove highly devastative as they are likely to be highly accurate and undetected by radars. Space based weapons are weapons that can attack space systems like satellites (i.e. anti-satellite weapons), attack targets on the earth from space or disable missiles travelling through space. The potential of these weapons is immense. However, they are largely still in the developmental phase.

(a) AD Guns Although the concept of AD Guns seems to be outdated prima facie, it still proves to be one of the most effective weapon systems for terminal air defence and in case of an EW scenario. These guns need to be controlled with latest technology radars which can detect and engage targets flying at high speeds. The introduction of “smart ammunition in AD Gun systems is a viable solution to modern air threats wherein the probability and damage on hitting the targets can increase manifold. Guns with higher rate of fire, more accuracy and more range are the need of the hour.

(b) Surface-to-air missiles Surface-to-Air missiles are those guided weapons which are most effective against air threats of all types. Different types of guidance can be given to the missiles depending upon the type of threat. These are however, susceptible to ECM measures by the enemy. Radar and infrared are the majorly used guidance systems. These are highly mobile and manoeuvrable weapons which can engage targets at really long ranges. The SAMs need to be more accurate and of quick reactions to be able to negate ballistic missiles and space-based threats effectively.

(c) Directed Energy Weapons (DEW) A directed-energy weapon (DEW) is a ranged weapon system that inflicts damage at a target by emission of highly focused energy, including laser, microwaves and particle beams. Common application of this technology is in missile defence system and against UAVs. Directed Energy Weapons have a disadvantage that they require very high voltage power supply. But these weapons are extremely accurate because they have the advantage that trajectory of energy beam is not altered by gravity and it follows a straight path. These weapons are suitable for use in space warfare and also against UAVs and ballistic/cruise missiles. High power energy beam used by these weapons burns the electronic circuits of the aircrafts, thus making them incapable to carry out their tasks. These weapons are classified in the following categories: –

(d) Soft kill measures. These measures are applied to give AD protection by interfering with sensor-based weapons systems. Soft-kill measures generally interfere with electromagnetic or acoustic signature of the target to be destroyed. These measures also include use of dummy radars and decoys as deception measures. Apart from this, jamming of EM waves is a common soft kill measure used by both target and the aircraft. Due to absence of human touch and intelligence in the modern threats, it is very easy to use these options against UAVs and missiles.

The doctrine of ‘Attack (offence) is the best form of defence’ is known to world since ancient times. Sun Tzu in his ‘Art of War’ opined that “The only real defence is active defence”. Chanakya’s Arthashashtra describes it as ‘Kutayuddha’ and he used this philosophy to have single-handedly engineered the victory of the Maurya’s by destroying the Nanda power. The prosecution of hybrid warfare through irregulars and non-state actors has gained currency over a period of time. In contemporary times the world is more volatile than it was ever before. With growing air superiority in the region, the need for India to upgrade its air defence capabilities is imperative.