Sub Title : A look at the variety of munitions that are available in this domain 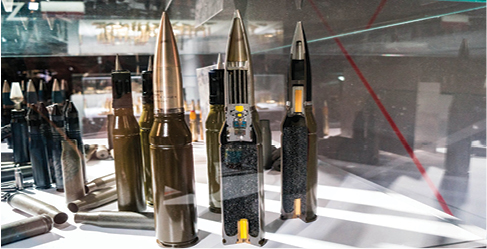 “A man can never have too much red wine, too many books and too much of Ammunition.” -Rudyard Kipling

With the introduction of guided weapons, came unparalleled potential with forces on land, sea and air. This, however, is more applicable to aircraft and other aerial threats which have grown exponentially in variety and capability. To counteract such threats, despite growth of SAMs, guns remain the main Air Defence weapon system across the world. Hence, the ammunition used in these anti-aircraft guns can no longer fire the age-old dumb projectiles but are required to scale up with integrated smart sensors and cumulative kill probability. In the same light, the existing legacy gun systems are in their extended life cycle and hence, the only immediate alternative is to improve the ammunition to increase the overall kill probability.

To augment the hit probability of gun ammunition, a definite level of intelligence is required to be added which should aim at developing intelligent and smart munitions. This would ensure that besides altering the ballistic parameters of the round, the guns would be able to track the target and guide the ammunition towards the future position to achieve an assured hit.

Technologies to Enhance Accuracy and Lethality of Gun Ammunition

To ensure that adequate smartness and higher degree of cumulative kill probability is incorporated into the Air Defence ammunition, we may increase the lethality component and include appropriate smart technologies. The details of these are covered below

Increase in Ammunition Lethality. There is a need to ensure that in eventuality of near miss desired target destruction happens. For this, dumb ammunition needs to be converted into an active projectile. Some methods to enhance existing lethality levels are given below.

Enhanced Blast Explosive. Incorporation of Thermobaric (TBX & EBX) Hybrid Explosives will have an enhanced blast effect which will provide a greater detonating parameter and create a point of high pressure that will propagate isotopically.

Controlled Fragmentation Techniques. Incorporation of a fragmentation warhead will create a large number of fragments that are propelled outwards causing greater damage. These are extremely effective against aerial targets. Inclusion of fragmentation technique and their effects will prove to be instrumental in causing heavier damage to aircraft.

Cluster Ammunition with Smart Fusing. Sub-munitions clustered in a projectile by a smart fusing technique may be employed to create a greater destructive result. Once these are coupled with programmable fuses, the most favourable distance of detonation based upon the desired effect, type of target and projectile can be worked out.

Guidance Technology in Gun Ammunition. Fitment of niche guidance and control technologies into gun ammunition will vastly transform the dumb projectiles into smart munitions. This would arm the ammunition to ensure a high degree of terminal accuracy against maneuvering targets like modern day aircraft, UAVs and missiles. Few guidance technologies which may be employed for the same are given below.

Multi Spectral Imaging Apparatus Seekers. Multi spectral imaging apparatus with a common collecting aperture combines a high-performance infrared imaging system with a high-performance millimetre wave transreceiver. Here, two mirror surfaces are combined with a refractive corrector in an infrared mode and a single reflective parabolic antenna. The dual mode system will function well in a search as well as a tracking configuration.

Electro Optical Contrast Seeker Technology. Microwave technology extended to the mm wave region as well as the optical technology has opened up longer infrared wavelengths. Optical contrast seekers or simply contrast seekers are a type of missile guidance system using a television camera as its primary input. The camera is initially pointed at a target and then locked on allowing the missile to fly to its target by keeping the image stable within the camera’s field of view.

Intelligent Ammunition Sensor Principle. The variety of tactical tasks, target types and explosive charge affects ammunition design. The warhead has to be triggered at the point of ballistic trajectory from which optimal effect on the target could be achieved. For AD ammunition, if the actual encounter situation allows, the optimal trigger point should be the minimum target distance at which the largest number of fragments hit the target. There are three main technical developments which form the basis of intelligence sensors. An excellent example of intelligent sensor is DM-64, a highly sensitive impact sensor which is incorporated in the fuse of shells.

Challenges Towards Drive for Smart Munitions. Expectedly, there are far too many challenges developing and subsequently incorporating of smart technology in gun ammunition. These are highlighted in succeeding paras.

Component Level Miniaturisation. Air Defence guns have a limitation of calibre (in the range of 23mm, 30mm, 35mm and 40mm) and the shell is very small. In this constricted space, it is extremely difficult to fit in an airburst or a proximity fuse in the nose cone. With further addition of smart technology, there will be colossal increase in the component level additions in the nose of a shell. A high level of expertise is required to miniaturise the components and package the complicated sensors within a constrained calibre of ammunition size. A critical balance between enhanced space requirements and bringing in smartness will have to be worked out. Rapid miniaturisation in circuitry, replacement of analogous SSTs by digital signal processing and the development of millimetric wave propagation have made improvements in application of intelligence to Air Defence ammunition.

Endure Detonating Force. The scale of miniaturisation within limited space available in the round places a restriction of gap between propulsion system and the projectile. Therefore, it is extremely important that shell should be ruggedized and strong enough to withstand the setback impact and detonation pressures.

Cost Benefit Analysis. As most of the gun ammunition is fired in large numbers, hence, a fine balance has to be maintained between cost and degree of smartness required.

Few latest trends in modern Air Defence ammunition which are already available world over include Advanced Hit and Destruction (AHEAD) which has variable round muzzle velocity and 100-150 tungsten alloy pellets in each shell, Penetrator with Enhanced Lateral Effect (PELE) armed with variable density round designed to explode without explosion and fuse and finally, Driven Ammunition Reduced Time of Flight (DART)which is beam guided, canard controlled and has a proximity fuse. Some of modern commercially available ammunition of these types has been highlighted in the succeeding paras.

57mm ammunition is probably the optimal class type from the point of view of range, terminal efficiency, weight and cost ratio. Its basic features include high effective range in terms of medium calibre application of modern explosive charge (RDX/AL) with enhanced blast effect and additional incendiary effect. It has high terminal effect of projectile fragments and hence, it is suited to engage all types of aerial objects including medium armoured targets also.

Military installations such as forward operating bases are vulnerable to rocket, artillery and mortar (RAM) threat. Indeed, such weapons have become tools of choice in asymmetric conflicts. This is further compounded by the fact that terrorists carry out attacks with ever smaller, evermore effective projectiles, which afford little or no warning. A core element of response to the RAM threat is its AHEAD technology. Along with Electronic Counter Measures proof sensors, C4I technology and effectors, the ammunition is destined to play an increasingly important role in defeating the RAM threat. The 35mm x 228 AHEAD ammunition will significantly enhance the effectiveness of modern automatic cannon. As the rounds leave the barrel, the time delay fuse in each projectile is programmed to eject its lethal payload of spin stabilized tungsten cylinders at the optimum moment, taking into account the distance to the target and the round’s initial velocity. Owing to their high kinetic energy, AHEAD projectiles and the sub ammunition they contain are able to destroy small and even very small targets very accurately. The ability to alter the time of ejection enables AHEAD ammunition to deal effectively with a wide array of current and future battlefield threats, while keeping collateral damage to an absolute minimum.

AHEAD technology also plays a critical role in the short and very short-range protection system (MOOTW) which is currently being developed.

AHEAD Air Burst Munition technology can improve the capability of Air Defence guns with the capability to fire short, 24 round bursts of high velocity AHEAD rounds aimed at the target’s intercept point. Every projectile is programmed by one muzzle based electromagnetic inductor, which sets an electronic timer to activate and separate the projectile into 152 heavy tungsten metal spin-stabilized sub projectiles (3.3 grams each), forming a lethal cone shaped metal cloud, placed ahead of the target in its flight path. The AHEAD Air Burst Munition concept is also highly suitable as a Counter-Rockets, and Artillery (C-RAM).

A number of niche technologies are under development to attain high hit accuracy employing a high density of fragments with radial scatter. Technologies like forwarded firing projectile and jettison warhead will improve munitions lethality and accuracy. With the spray pattern being adequate to cover the target area, it will duly cater for the errors due to aiming and fusing.

Efficient multi-mode fragmentation design technology may be used to destroy a range of targets in this case. Logistic requirements in such a case may be reduced by employing multiple sized fragments on the same round. Intelligent fragment design is possible using technologies like nanotech/ material science and same can be guided independently towards the target to achieve 100% kill probability.

A Peek Into the Future

A large number of technologies like artificial intelligence, computing, genomics, robotics and sensors are making a foray into applications for smart ammunition. The Defence Advanced Research Projects Agency (DARPA) of US is developing smart bullets which are capable of changing direction in mid-flight. This is called Extreme Accuracy Tasked Ordnance (EXACTO) which is self-guided ammunition and can modify its course based on change in target location or due to external ballistics. The optical nose of the ammunition detects the laser illumination of the target and with help of the control fins, the course can be changed onto the target’s future position.

Raytheon has recently demonstrated that there exists is definite possibility of correcting the course of a round during its trajectory. The course correction technology, which has been under development here is referred to as impulse manoeuvre technology. The aim is to engage the targets performing unpredictable manoeuvres under varying external ballistic conditions and fire control errors. The decision about when and how to trigger the detonation of course correcting charges could either be kept with the projectile by equipping it with strap down seeker or be performed by the Fire Control computer with command links to the shell in flight.

Smart ammunition coupled with enhanced lethality is the best way to ensure that Air Defence guns system have the requisite kill probability. Determined efforts to develop gun fired precision projectiles speaks for the significance of these munitions. A number of programs, have established that the technology needed for development of gun fired smart munitions is practical and set for rapid exploitation.

Recent advances in computer modelling, miniaturisation, hardened seekers and electronics has allowed for new realms of such possibilities in this field. Thus, the rapid strides made in the field of smart ammunition along with technical developments in Fire Control radars have ensured that Air Defence guns stay relevant in the contemporary air battle between futuristic aerial threat and ground Air Defence response.