Myanmar :The Return of The Generals

Sub Title : The coup is driven by the military's goal to preserve its central role in Myanmar politics 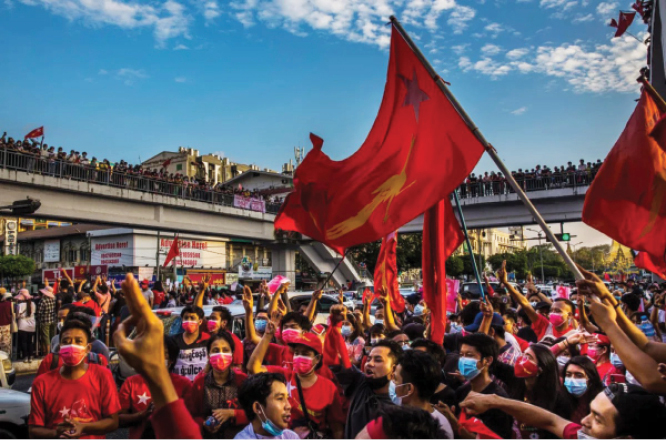 The coup driven by the military’s goal to preserve its central role in Myanmar politics with the tacit support of China has brought Myanmar to a dangerous pass. It will push Myanmar  back into defensive isolationism that it has remained in before. For India the situation should be one of concern as Chinese influence in the country will increase, enhancing the threat on our eastern flank

At 3 am on 01 Feb, the day Myanmar’s new parliament was to open with Aung San Suu Kyi’s National League for Democracy returning to power with an unprecedented majority, the army swooped down; arrested Aung San Suu Kyi and President Win Myint, declared the elections null and void on charges of ‘electoral fraud’, and took over the country in a coup d’état. Myanmar’s decade long tryst with democracy hit an abrupt roadblock as the army came back in power.

The C in C of the Tatmadaw, as the Army is called, General Min Aung Hliang has appointed himself as the head of government and declared a state of Emergency. He has promised to hold ‘free and fair’ elections after a year. But a year seems a long way away. As Aung Suu Kyi languishes in detainment (held on charges as obscure as being in possession of ten walkie talkie sets) the population is out in the streets in a concerted show of defiance, seeking a return to Democracy. A brutal clampdown that has left over 700 dead and scores more arrested, has been unable to stem the protests. As Myanmar totters on the brink, the turbulence there raises the prospects of instability in our neighborhood.

What could be the reason for this abrupt turnaround.  The Tatmadaw – like the Pakistani army – are never too comfortable with handing over power to their civilian counterparts; and when they do so, they like to hold on to the reins. Like in Pakistan, the army has a long history of meddling  in politics. In their first coup of 1962 they derailed the elected government of U Nu. In 1990, they overturned the NLD’s electoral victory and took over the state, placing Suu Kyi in house arrest. That led to two decades of Myanmar’s self-imposed isolation, when it shut itself off from the rest of the world. Ironically, it was the army that led Myanmar back to Democracy by holding elections in 2011. Yet they had ensured that they hold on to power by drafting the Constitution, which gave the Tatmadaw control of all decision-making bodies and also had 25 percent of all parliamentary seats reserved for its candidates. During Suu Kyi’s regime, there had been disagreements, but the relationship limped along. Perhaps what has frightened them this time was the scale of Kyi’s victory. Her National League for Democracy won 396 of the 476 seats on offer and garnered over 80% of the popular vote. The Generals felt that she could use this brute majority to restore civilian supremacy and dilute their powers. Another likely case is that the Army Chief, General Min Aung Hliang is due to retire in June. This coup will ensure that he continues for some more time and elevates himself to determine his own retirement date.

While the coup was bloodless and efficiently conducted, the Army failed in anticipating the vehemence of the protests that followed. Three months after the coup, the protestors still throng the streets, facing bullets and late-night arrests.  To ensure that the Army does not have access to the economy, the protestors have launched a civil disobedience movement that has shut down the nation.  Railways have halted, 75 percent of civil servants do not attend work, shops, offices and schools are closed and the country has come to a standstill. Myanmar’s already faltering economy has dropped by over 60%. The Buddhist clergy too has joined the protests, providing the same moral and ideological support that they did during the 2007 Saffron Revolution. And the protestors are graduating towards armed action with the formation of a ‘Federal Army’ that could well lead to civil war in Myanmar.

The world response has been somewhat muted.  It seems too pre-occupied with COVID, to focus on this obscure corner of the world, but the developments in Myanmar could have far-reaching implications. The world had welcomed Myanmar’s return to Democracy in 2011, and feted Suu Kyi’s struggle with a Nobel Peace Prize. Yet, she had lost favor in recent times for the army crackdown against the Rohingya Muslims which created over a million refugees and caused a humanitarian disaster. But then even a flawed democratically elected government is better than a military regime.  Getting Myanmar back to democracy is essential for all.

The UNSC has not issued any statement (halted by Russia and China) condemning the coup but merely asked for the release of Aung San Kyi. The USA has pressed for sanctions, but that is a cosmetic step as sanctions rarely work.  The effect, if any,  will be felt by the common man and not the military against whom they are targeted. It will push Myanmar  back into defensive isolationism that it has remained in before. This will also push it further into China’s embrace. China has tremendous economic and geo-political interests in the country and over the years has been extending its influence there.  Chinese influence has increased with a slew of China Myanmar Economic Corridor initiatives, which has enabled them to develop the Kyaukphyu port, lay oil and gas pipelines up to their Yunan Province and also develop the New Yangon City Project. Their engagement in the Kyaukphyu port, comes with a 50-year lease, and gives China access to the Indian Ocean bringing it uncomfortably close to the Andaman Islands. Yet, as it woos Myanmar, it is also financing insurgent groups like the Arakan Army and the United Wa State Army within the restive Rakhine Province.

China has used the Western shunning of Myanmar, following the Rohingya crisis to make inroads there. They may now use this opportunity to win over the Generals and push through their projects and investments in Myanmar (in much the same manner that they gained support from the Pakistani Army for the CPEC). Yet, within Myanmar, there is a major wave of anti-China sentiment. Protestors have been targeting Chinese shops, factories and projects. The general consensus is that Tatmadaw got the go-ahead for the coup from China. To assert their hold on the country, China needs a subservient military which isolates the country from the rest of the world, and thus strengthens its own hold on it.

India has an interest in ensuring a thriving democracy in Myanmar. But at the same time, it enjoys a good relationship with the Army which has assisted greatly in the dismantling of terrorist camps of ULFA and other militant groups on their side of the border. In recent years, India had gifted them a submarine, supplied hardware and imparted training to their officers. It is also developing the Sittwe Port in the sensitive Rakhine state.  The aim now would be to maintain the relationship with the army and use it to press for an early return of democracy in Myanmar.

India has been ambivalent about the happenings in Myanmar, but it needs to put its hat in the ring. The crisis is a ticking time bomb, and should the protests and army action go out of hand, it could unleash a flood of refugees into India and Bangladesh. The Rohingya clampdown spilled over a million refugees and caused a humanitarian and security crisis that is still unresolved. Another flood of refugees will be virtually unmanageable.

We also have our own investments to protect and it is important to maintain our influence in this strategic piece of turf. We are already in a situation, where a democratically elected government in Afghanistan is likely to come under Taliban sway after the US withdrawal. That will cause turmoil on our Western flank which will spill over to us. But while our strategic influence in Afghanistan is limited, we do have greater say in Myanmar. We can engage the Generals for the release of Aung Kyi and the restoration of the democratic process – perhaps with an understanding that gives the Army a role to play in governance. We can also mobilize bodies like ASEAN, Quad and the United Nations. Quad – as a grouping of ‘like-minded democracies’ can play a more active role in the restoration of democracy, (though in its present charter, none of the members, barring India have shown an interest in the role). India could broker some kind of understanding between the parties there. And although the Generals have been more responsive to our security concerns than Aung Kyi’s government, we must still stand up for the democratic processes and the return of democracy. In the long run it is that ideology which would be best suited for us and the region.

The Economist prophesied that Myanmar would be ‘Asia’s next Failed State’.  That may be far from the truth, but should the present state of affairs continue, Myanmar could well go back to being a ‘hermit kingdom’. That would be in no one’s interest – less China. Myanmar’s return to democracy and re-engagement with the world community is essential for the region.  And India, as a democracy and a regional power can use both credentials to facilitate the same. Else we could just have arc of instability on our Eastern flank as well.