Pakistan at the Crossroads – Again

Sub Title : Collective uprising against Imran and the Army 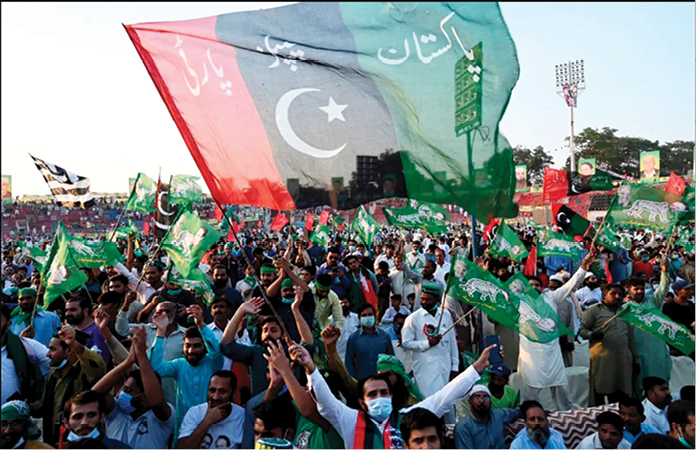 Imran Khan, beleaguered on all sides, has been secure in the knowledge that he has the army’s backing. The present political recalibrations threaten to upset that equation. For the first time, eleven opposition have come together under a common umbrella. They have capitalised on growing resentment against Imran Khan and taken to the streets. Pakistan is indeed dangerously poised

Last month another cycle of political turbulence erupted in Pakistan. The leading opposition parties came together under the banner of the Pakistan Democratic Movement to demand the ouster of Imran Khan – the ‘selected’ Prime Minister. Back-to-back rallies at Gujranwala, Karachi, Quetta and Peshawar saw the unprecedented sight of Nawaz Sharif’s Pakistan’s Muslim League, Bhutto’s Pakistan People’s Party and a host of regional parties come together on a common platform . Even more unprecedented was the scathing attack on the army – normally a sacred cow – launched by Nawaz Sharif, who singled out the Army Chief, General Bajwa and accused the army of becoming ‘a state above a state.’ Political turmoil is no new occurrence in Pakistan. What set this apart was the scale of the movement and the direct challenge it poses to Prime Minister Imran Khan and the very institution of the army.

Almost simultaneously, there was a spurt of action on the LOC and a renewal of terrorist activity in Kashmir. Intense firing and mortar and artillery duels erupted along the 778 kilometre long LOC at Baramulla, Dawar, Karen, Uri, Naugam and Poonch, causing casualties on both sides. This was not an unusual activity. After all there have been 4052 ceasefire violations by Pakistan this year, far more than ever before. But the scale of the firing was heavier than before and seemed part of a coordinated plan. This was followed by the foiling of a likely attack by a group of heavily armed Jaish-e-Mohammed terrorists, who were killed on the outskirts of Nagrota, presumably on a mission to disrupt the District Development Council elections in Kashmir. The internal turmoil in Pakistan and the intensification of action against India are interlinked, perhaps as a measure to divert public attention and reinforce the image of the army. As always, the internal turmoil in Pakistan could have repercussions in India.

Again at the Crossroads

While Imran Khan’s government has been beleaguered on all sides, he has been secure in the knowledge that he has the army’s backing. The present political recalibrations threaten to upset that equation. For the first time, eleven opposition parties – the Pakistan Muslim League (Nawaz), the Pakistan People’s Party (Bhutto), the hard-line Jamait Ulema-e-Islam, the Pakhtunkhwa Mili Awan, the Baloch National Party and a host of regional parties have come together under a common umbrella. This implies that the major power centres of all its provinces – Sharif in Punjab, Bhuttos in Sindh, and even in Balochistan and the Pukhtunkhwa have united on a single point agenda – the removal of Imran Khan. Significantly, the face of the movement is the hard-line Maulana Fazlur Rehman, which pre-empts a divisive leadership tussle later. They have capitalised on growing public resentment against Imran Khan. During his 27 month long tenure his report card has been dismal. The economy has contracted from a growth rate of 1.9% to minus 1.5%. Inflation has climbed up to 10.7%, four percent higher than when he had taken over. The much promised infrastructure, electricity and jobs of his ‘Naya Pakistan’ have failed to materialise and the economy is in free fall.  And Corona is rampant with over 4 lakh cases and 8000 deaths already. The government is unable to impose any measure to control the spread, which means that religious and other congregations continue with little check to halt the spread of the pandemic.

To add to its woes, Pakistan has fallen out with traditional friends like Saudi Arabia and the UAE, who they have alienated by siding with Turkey and Malaysia (seen as a direct affront to Saudi’s traditional role of leadership in the Muslim world). This led a piqued Saudi to call in the $2 Billion loan given to Pakistan as part of its last bail-out package. ( which led to another high interest loan from China to repay it) Close on its heels was its continuation on the ‘Grey List’ by the Financial Action Task Force for failing to comply with six key obligations, including taking action against UN designated terrorists Hafiz Saeed and Masood Azhar. Hafiz Saeed was recently sentenced to 10.5 years in jail, but it seems more of a cosmetic gesture ahead of the next FATF review in March. It has been fortunate to avoid being placed on the Black List but even now, will find it difficult to get funding from the IMF, World Bank and the Asian Development Bank furthering the problems of the cash-strapped nation.

Worst of all, is the fact that Kashmir seems to have gone out of their hands. The abrogation of Article 370 and the subsequent inability of Pakistan to convince the world community or even the Islamic States of its narrative is seen in many quarters as a direct failure of Imran Khan and  the Army Chief “who sat while India ‘annexed’ Kashmir.” In fact, the opposition has accused them of ‘making a deal’ with India. In Pakistan, that is a deadly denouement, even though it is unlikely that any other leader would have been able to do anything else. Kashmir is now holding the District Development Council elections in which all parties are participating. This would mark a vital step in the return to normalcy and is a process that Pakistan would like to disrupt. For both Imran Khan and Bajwa, the key lies in keeping the pot boiling in Kashmir and deflect attention towards India.

As Pakistan’s economic and internal problems intensify, they will turn deeper into the strangle hold of China. As foreign aid reduces, they have resorted to borrowing from China – but at a cost. The government debt to GDP ratio is an astounding 83.3 % and the intense borrowing they had resorted to for the CPEC projects has placed the country in a vicious debt-sustainability cycle, forcing it to borrow just to meet repayment obligations. China itself has already invested over $64 Billion dollars in CPEC projects in Pakistan, and has an interest in keeping Pakistan afloat. But it will demand its pound of flesh. With the India-China stand-off along the Line of Actual Control, Pakistan can now be the willing partner to keep Indian troops engaged all along the LOC and even in the hinterland. An indebted Pakistan will be a willing proxy for China, but in the long run, it will be Pakistan that will pay a price for it.

Their Internal Minister Fawad Chaudhury admitted on the floor of the national assembly that Pakistan had orchestrated the February 19 Pulwama attacks. The terrorists killed in Nagrota this month were linked back to their handlers in Pakistan and suspected to be planning a similar attack. Should another attack take place, it may lead to a Indian retaliatory strike which coupled with the heightened tensions along the LOC and LAC could very well escalate.

Other changes are taking place that will impact Pakistan. With Joe Biden taking over as US President in January, there will be a greater emphasis on combating terror and human rights. Pakistan is likely to come under scrutiny on both counts. The ongoing process in Afghanistan too will impact Pakistan. With the withdrawal of US troops from Afghanistan by 2021, and the unravelling of the peace talks between the Afghan government and the Taliban, there will be even greater instability there. Pakistan has earned brownie points for getting the Taliban to the table, and would like to see it return to power, but relations between the Afghan government and Pakistan are strained – if not downright acrimonious – for its role in fomenting terrorism from its soil. While Pakistan would like to fish in troubled waters, continual instability in Afghanistan and the likely return of the Taliban, may actually cause a spurt in religious extremism in Pakistan itself.

But in spite of its internal and external turmoil, Pakistan will limp through as they have so often before. Imran Khan’s political future could well be determined by the Long March to Islamabad, planned by opposition parties in January. These nation-wide rallies will also test the army. If the opposition gathers steam, the army may review its relationship with Imran Khan and perhaps even prop up one of the many contenders within his own party. Or it could enter into an independent deal with the opposition leaders. Economically too its travails are likely to continue. But it has recently received an $800 million special loan from the IMF and irrespective of the FATF status it gets, will continue to be propped up by world bodies to prevent complete disintegration. Perhaps that is something the Pakistani leadership are themselves banking upon.

The much respected Pakistani journalist Khalid Ahmad calls Pakistan as “The ‘Insha Allah’ nation” – a nation that survives on hope. As he puts it, if they only use their geographical location to become a trading nation, they could emerge in the same manner as Bangladesh. Yet, the first step to that is to mend ties with India. But that is not in the interest of the army or the ruling party. So this political and economic turmoil will continue. Much of the fall out of their internal turbulence will be felt by India, and this will only increase with Chinese collusion and their actions in Ladakh. It is a dangerous situation, but unfortunately it is likely to continue, and one that we must be prepared for.