Sub Title : An unfortunate and desperate situation exploited by terrorist organisations in Pakistan 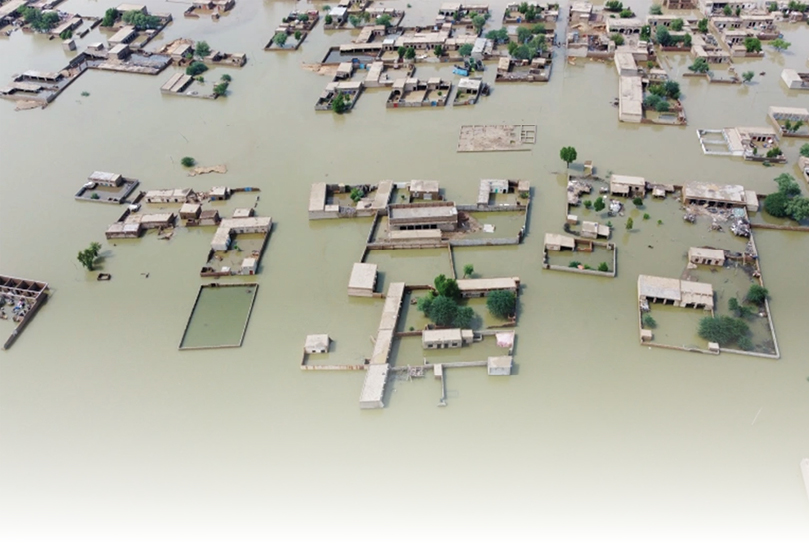 Calamities besides bringing suffering to people also afford an opportunity to the unscrupulous to exploit the situation by diverting funds meant for relief to nefarious activities. Pakistan is an ideal playground for diversion of funds for terror activities

The frequency of extreme weather events is a reality check that climate change is no longer a future challenge. One such extreme weather event is the 2022 Pakistan floods: the “monsoon on steroids” has killed close to 1,400 people, left 15% of Pakistan’s population vulnerable, and a third of the land submerged. Despite contributing only 1% to total global emissions, Pakistan has faced numerous climate change fueled calamities. The damage is exacerbated when coupled with poor governance: dismal climate resilience efforts, illegal construction, poor drainage and flood-absorption capacity, etc. The people of Pakistan must question as to why is there such  a drastic upswing in damage caused between the floods of 2022 and 2010. Apart from the quantifiable destruction, it is crucial to note the ravages that go beyond numerical measure. The topic pushes various tangential discussions to the fore: Climate change is borderless; Past polluters must take responsibility; Climate resilience is the need of the hour. However, another critical tangent is the reverberations in the security situation in Pakistan and consequently the adjoining countries. More specifically, how do natural calamities faced by Pakistan impact terrorism in South Asia in general and India in particular.

Terrorism and climate change, climate calamities in particular, have an intricate relationship. Where disaster strikes, instability brews and distress is leveraged for malevolent ends. The crisis in Pakistan has widened the gap in the population’s needs and the government’s capacity to fulfill them. This lacuna is easily exploited by malicious agents damaging the country’s already fragile internal security situation. The social, economic, and health costs of the crisis have been dear. Disrupted transportation and communication infrastructure has rendered youth away from schools and universities. The education sector was previously hit by the Covid-19 pandemic. Flooding, synonymous with diseases, has increased the stress on the public health infrastructure. The submerged agricultural sector—22% of the GDP—has pushed industries towards imports at a time when inflation is increasing, and foreign exchange reserves are depleting rapidly. The result: shortages, lay-offs and unemployment, hunger, poverty, etc., strengthening the pre-existing social and political unrest, i.e. greater internal instability.

Yet again, Pakistan has relief streaming in from all over the world to address the discontinuity between peoples’ demands and the state’s supply. The United Nations has appealed to the international community to raise $160 million in relief for Pakistan. The United States has pledged a relief package of USD $30 million along with a call given by President Biden urging the world to support the “underwater” Pakistan. The country is receiving significant aid from the US, China, Oman, Qatar, and the UK to name a few. While food packages, health care facilities, hygiene and sanitation products, raw materials, etc., form a major component of aid packages, a part of it is bound to be cash which poses a security threat. Given Pakistan’s history of diverting international aid to terrorist outfits through money-laundering, corrupt public officials, and illegitimate charities, it is crucial to employ complete transparency in the relief delivery efforts.

While the external aid can still be monitored by international actors, a greater threat is posed by the internal fundraising and relief operations spearheaded by terror outfits. It is already being reported that the cadres of Lashkar-e-Taiba (LeT) are involved in providing relief and collecting funds. A slew of concerns arise out of the relief initiatives of terror group cadres. The LeT and its various charitable fronts have been known to exploit past crises. The 2005 earthquake in Pakistan occupied Kashmir (POK) proved to be a wonderful opportunity for Jamaat-ud-Dawa (JuD) to raise funds. Of the £5 million received, a minuscule amount was utilized for earthquake relief while the rest was diverted to LeT offices in Saudi Arabia. As reported by Washington post, monitoring the funds allowed British Intelligence to thwart attempts to detonate US bound flights in 2006.

Similarly, the 2010 floods were also exploited wherein the JuD emerged as one of the most active and popular participants in relief operations. Further, a study authored by two senior faculties at University of New South Wales have highlighted the correlation between inadequate government aid and the sharp increase in Taliban’s popularity in 2005 earthquake and 2010 flood affected areas. The funds are utilized to further entice potential recruits, financing terrorism, militancy, and infiltration in the Kashmir Valley. A tiny proportion of the funds is actually utilized to deliver relief and build public infrastructure in order to maintain the charitable image. This is simply an investment to reap future benefits.

Currently, Lahore’s Masjid al-Qadsia—known to be associated with LeT—has emerged to be at the centre of the outfit’s relief efforts. Ironically, Pakistan claimed to have taken control of this mosque in 2018 in a bid to curb terror. Further, a US sanctioned terrorist Hafiz Abdul Rauf who was appointed as the head of Falah-e-Insaniat Foundation, listed as a front organization of LeT by UNSC, has been at the forefront of these operations. Moreover, thousands of Lashkar cadres have been involved in aid-delivery, sporting vests with “Allah-o-Akbar Tehreek” printed on the back. Allah-o-Akbar Tehreek is a political party formed by Rauf. These facts coupled with the active status of many Lashkar leaders that Pakistan claimed to have imprisoned, such as Hafiz Saeed, Saifullah Jatt, Zafar Iqbal, Yahya Azi, etc., suggests that Pakistan’s efforts to meet the FATF’s requirements to exit the grey list were simply an eyewash.

Apart from the purpose of generating funds for terrorism, such crises can be leveraged to strengthen radicalization drives. With the people helpless and politicians consumed in blame games, the distribution of blankets and rations, building public kitchens, rebuilding homes etc., allows terror outfits to emerge as messiahs and woo the public. Relief work can easily become a facade for corrupting the youth that is out of schools and employment. A population that is brimming with discontent for its government will happily embrace ‘helpful’ actors and subscribe to their ideologies. Moreover, such relief work also allows terror outfits to gain confidence of senior political leadership. The resultant fundamentalist mobilization of flood-victims poses a serious threat for India. This comes at a time when Kashmir is escaping the clutches of Pakistan-sponsored terrorism and entering a rejuvenated democratic set up. Kashmir successfully evaded Pakistan-sponsored attempts to brew discontent in the valley post the abrogation of Article 370 and is eager to reap the benefits of increased integration with the rest of India. Today, India cannot afford to lose this momentum and potential for peace and development to the exploitative actions of terror outfits masquerading as philanthropists.

Ideally, the state should be able to provide the aid that these terror outfits are distributing. It is this gap in Pakistan’s welfare operations that is exploited by terrorist outfits and cadres to regain lost ground and earn the citizenry’s loyalty and support. Should Pakistan wish to rescue its human capital from the path of radicalization, it must check corruption and pilferage, build an effective disaster response and prevention infrastructure, ensure availability of basic amenities, and regain the trust if its people. Not only is this crucial for Pakistan’s socio-economic development but also for ensuring peace in the larger geopolitical landscape. However, the moot question remains, does Pakistan even care?