Pulwama, Balakot and Beyond

Sub Title : Way forward for India to deal with Pakistan's attempts to bleed India by a thousand cuts and post Pulwama 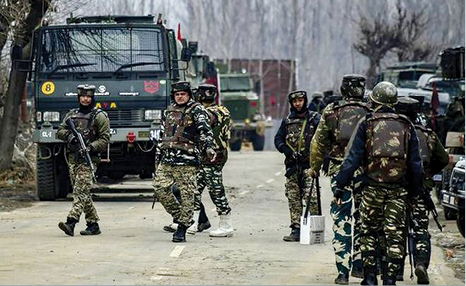 India and Pakistan have shared a tumultuous relationship for decades. The Pulwama attack and the Balakot retaliation are the latest face off. What has come of it and the way forward for India to deal with Pakistan are articulated herein

On 14 February, a Kashmiri youth, who had been indoctrinated and trained in Pakistan by the Jaish-e-Mohammed, rammed his explosive loaded SUV into a CRPF vehicle, killing himself and 40 CRPF personnel. As the nation grieved and seethed with anger, retaliation had to follow. And it did. Thirteen days later, twelve Mirage 2000s armed with precision SPICE bombs attacked a Jaish-e-Mohammed training camp in Balakot killing over 250 militants. That twenty minute operation held a significance beyond the actual casualties or the damage caused. It sent a signal that India was no longer bound down by the LOC or other self-imposed boundaries and was willing to take the battle into Pakistani turf.

The Pakistani air incursion the very next day, was another signal. It signaled that for all its economic and internal travails Pakistan was willing to cross boundaries in support of the groups they sponsor and the cause they espouse.

In the first aerial clash since 1971, both sides lost an aircraft each. A MIG 21 flown by Group Captain Abhinandan was shot down in Pakistani territory after it downed an F 16. This turn of events marked a dangerous climb up the escalatory ladder and the return of Abhinandan was just a temporary pause in the situation. The two sides have walked back from the brink and yet what has been the eventual outcome? Both sides claimed victory, but the winner would be the one who wins the battle of perception – both internally and in the eyes of the world.

So how do we gauge the outcome? It cannot be determined by the number of deaths – the Indians claim around 250, the Pakistanis say none were killed and the only damage was to trees in the Balakot forest. The actual result would be somewhere in between. But the target was not the camp. It was the mind of the Pakistani planners. The knowledge that India can cross the Rubicon and take the gamble of escalation will have a bearing in their subsequent actions.

Pakistan too has claimed victory. By its immediate retaliation and the shooting down of an Indian aircraft they have assuaged public perception. For the army it is a victory that allows it to parrot its usual line of being the only defender of the nation. The return of Abhinandan also acts as a temporary balm and gives Imran Khan a political victory as well.

In terms of encounter, it is at best a stalemate. Yet, diplomatically Pakistan stands isolated and it is significant that no nation condemned the Indian air strike. In fact, France, UK and USA supported it as a legitimate act. Pakistan was exposed as a sponsor of terrorism, but then it has been exposed repeatedly in the past but has not done anything to change its ways. The Indian diplomatic offensive was a success but did not achieve the culminating point it hoped for. In the end, its efforts to declare Jaish-e-Mohammed founder Masood Azhar as a global terrorist in the UNSC came to naught, blocked again by China. Yet it is significant that 14 of the UNSC 15 members supported the proposal and even after it was vetoed, France and perhaps EU would still go ahead to freeze the assets of the group.

So now that both sides have shown that they can climb several notches up the escalation ladder, how does it change the dynamics? There would be temporary caution now on both sides, but will it change the overall situation? Also should a similar attack come about now, what would be our space to maneuver?

Will another Pakistani sponsored terrorist attack be met by another air or ground strike, or even a missile attack? US reports say that missiles on both sides were primed and kept ready. For nuclear armed nations, a missile strike can be the start of a fatal miscalculation. The next step would be a limited war. But then war is definitely not the answer. India stands to lose more than Pakistan does. Pakistan is in any case, a dole based economy that will continue to limp along with infusions from China, Saudi and maybe even the IMF. India’s is an investment based model and even a short war will halt the flow of investments and affect growth for 2 – 3 years, if not more. Plus what would be the aim of any war? Do we have the capability to destroy the terrorist infrastructure in Pakistan or even break Pakistan’s will to continue to sponsor terrorism? An inconclusive war will merely project Pakistan as the winner in the battle of perception and enable them to further their activities in Kashmir.

The policy of ‘Bleeding India with a thousand cuts’ has to be countered by a similar policy of ‘Bleeding Pakistan with ten well-directed cuts’ and strike them where they are weakest. Pakistan’s weakest link is its economy. Cutting off all inflows to their economy, whether by revoking their MFN status, halting export of foodstuffs or even permitting their artists to earn a living in India will pinch. The reduction of waters that flow in to Pakistan – more than what is permitted by the Indus Waters Treaty – will hurt water-stressed Pakistan more than they admit. But for all the talk of revoking the Indus Waters Treaty, that is not a step we can legitimately take. Nor do we have the wherewithal for it. Cutting off waters from India’s rivers flowing into Pakistan is not like switching off a tap. It will involve creating dams and diversionary canals which will take a decade or so to implement and will go against us in the long run.

The other weak spot is Pakistan’s international image which is already at an all-time low as a sponsor of terrorist groups ranging from the Haqqani network, Jaish-e-Mohammed, Hizbul Mujahideen, Lashkar-e-Toiba and a host of others. It was forced to ban Hafiz Saeed’s Jamaat-ud-Dawa and Falah-e-Insaniyat Foundation after the Financial Action Task Force threatened to put it from the Grey List to the Black List – which would debar it from receiving any further payments or aid from IMF or international bodies. Incidentally India is on the co-chair of the Asia Pacific Group of the FATF and will have a significant say in the group. But even if Pakistan is forced to clamp down – as Musharraf was forced to do in 2003 – what would be the outcome? Unless there is any change in the thought process these will be cosmetic measures at best. Actions like the banning of groups and freezing of their accounts can be easily circumvented by merely renaming them and having them re-emerge in another avatar. The army would never allow these assets to fade away, and Imran Khan having come in to power with the support of Islamic fundamentalist groups, would toe the line. So it will be status quo after a few months.

With the Pakistani economy being in the situation it is in now, we can use the IMF and FATF route to tighten the screws. Pakistan needs the IMF bailout (for the 22nd time in its history) of $12 Billion, and its actions at this juncture have merely exposed it further. Using diplomatic leverage to block its aid, can help tilt it towards economic collapse – which is what we should aim at. Just as the US helped bring about the disintegration of the USSR by pushing it into an exorbitant arms race it could not afford, we can make the economic price of supporting terrorism so high for Pakistan that it would self-destruct.

As these events and optics unfold, other factors also come to play. The first is the stance that China will take. China has been ambivalent in the ongoing tensions, but it has once again blocked efforts to declare Masood Azhar a global terrorist – showing exactly where its loyalties lie. With over $62 Billion in investments in Pakistan, they have a considerable stake and would want to strengthen the hands of its long-time ally. Their increased involvement in POK, could see them raise the Kashmir issue with Pakistan’s prodding. The only balancing factor is that China itself faces the scourge of Islamic fundamentalism in its Eastern Province of Xingiang and in the long run they have an interest in curbing it.

Events taking place in Iran and Afghanistan will also have a major impact. It is significant that around the time the Pulwama attacks took place, a suicide bomber killed around 40 Republican Guards in Teheran – an act Iran blamed on Pakistan. A spate of attacks in Afghanistan were also attributed to Pakistan. Coincidentally (?) there was also a major attack by Baloch freedom fighters on a Pakistani convoy which killed 28 Pakistani troops. Exploiting Pakistan’s vulnerable Western flank and its fault line in Balochistan could deflect their attention. There was a misplaced school of thought that stated that a having a strong, stable Pakistan would be in India’s interest. That fallacy has been repeatedly disproved and weakening Pakistan in every respect – without recourse to actual war – would be in the best national interest.

Time is of essence in this situation. Pakistan is using two factors, the coming national elections in India and the impending US pullout from Afghanistan. Political decision making will be lax till the new government is in place and they could exploit this window. Also they will use their role to broker a deal between the US and the Taliban. Then, should the US withdraw, and the Taliban return to power in Afghanistan – the influx of Afghan fighters into Kashmir will become a flood and the situation could get truly out of control.

To address the issue, we have to address the root cause in Kashmir. Unfortunately we have lost the plot there. The muscular policy against terrorists and their sympathizers must continue. 18 terrorist – 14 of them from Jaish-e-Mohammed- have been killed since Pulwama. But this must be balanced by a humane face to wean the population back into mainstream India. The regional parties too have to be on board, so that a democratic face is projected. We are to first win the war of perception there, for any normalcy to return.

After the jingoism dies down, neither side should allow themselves to be fooled by their own perceptions of victory. Neither side has won. It is just that the battle-lines have been redrawn. And that raises the dangers considerably in the volatile sub-continent.