Role of Secure Internet of Things Applications in Indian Defence

Sub Title : How and why the IoT’s security assumes significance in the country 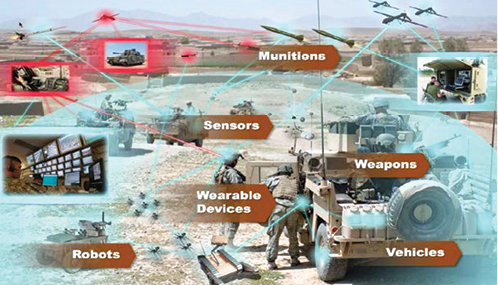 The term Internet of Things refers to the collective network of connected devices and the technology that facilitates communication between devices and the cloud, as well as between the devices themselves. The article outlines the uses thereof  to facilitate military operations and enhance the efficiency of the defence ecosystem. It also stresses the need for a secure IoT

Internet of Things (IoT) has already changed a number of businesses with its “connected devices” architecture and autonomous presence in the closed loop network of devices. Many countries are trying to use IoT in military and defence applications to solve problems that come up during conflict and on the battlefield. The Internet of Military Things (IoMT), or Internet of Battlefield Things (IoBT), is a type of IoT that is used in modern warfare and information warfare. The idea behind IoMT is that it will take off a lot of physical and mental stress, in the field, by building a small ecosystem of smart technology that can process sensory data and handle many tasks at once. IoMT’s main goal is to solve problems that come up in modern warfare. The Government of India (GoI) has created a unified structure with rules based on Artificial Intelligence (AI) to bring the Make in India drive into the defence industry. The government has already set up the Defence Artificial Intelligence Council (DAIC), which is run by the Defence Minister, Shri Rajnath Singh and aims to give the military the right structure to use IoT applications. The article outlines the needs and importance for IoT as well as current problems and challenges, gaps in current methods, and ideas for enhancing security in Indian defence ecosystem and operations.

With its connected devices framework and autonomous presence in the closed loop network of devices, IoT has already impacted a number of industries. To address various issues in conflict and on the battlefield, many nations are attempting to use secure IoT applications in military and defence sectors. An IoT applications category for contemporary combat operations and intelligence warfare is the IoMT applications. IoMT applications can be used for the following.

Military operations are difficult, complicated, ambiguous and full of surprises. Military leaders have a limited amount of time to plan, choose possible battle fighting strategies, and come to the right decision. They need inputs from every possible source to make sure that all variables are taken into account and that they know what the overall and important effects of their decisions and plans will be. One way to solve these problems is through IoT. Further, IoT has grown a lot around the world, with an emphasis on how it can be used. IoT is another paradigm that takes into account the many smart objects and things in our world. By combining sensors, actuators, and control systems with the infrastructure they already have, the military may be able to do more with less. The connected device architecture, or its life on its own in the closed loop network of devices, has already had an effect on a number of industries. Many countries are trying to use the IoT in their military and defence to solve a wide range of problems that come up during war and combat. Practitioners talked about the requirements for secure IoT applications, how they can be used, and the risks that come with traditional practice.

In this age of technology, tried-and-true IoT defence applications security could help turn intelligence into a business and strengthen the armed forces. Secure IoT applications can help the military with a wide range of tasks such as spying, surveillance, obtaining information about enemy bases or terrorist hideouts, and fighting on the battlefield. Security is an issue that makes it hard for people to use IoT applications. When it comes to security solutions, providers have had a hard time going beyond their normal areas of expertise. For example, IoT security services from operators have mostly focused on keeping networks stable and making sure devices are real. There is no doubt that security can be broken at the device, network, app, storage, and data levels. Some work is now being done to help vendors and operators work together. IBM, Nokia, Palo Alto Networks, Symantec, and Trustonic, for example, joined the IoT Cybersecurity Alliance with AT&T so that they could offer solutions that cover everything from end to end. End-to-end security is needed for secure IoT to be used by most people. Palo Alto Networks, Check Point Software, FireEye, Fortinet, Mimecast, and FireEye are all leaders in the field of unified threat management. Top IT companies like Cisco, IBM, Dell, and HPE also offer interesting options for IoT security. It is thus  important for the defence sector to find and highlight the problems related IoT security.

Ten sectoral groups of secretaries covering all sectors have created a set of objectives as well as a strategy to accomplish them by the year 2047. Security and foreign policy are two sectoral groups. This comprehensive travel guide honours India’s 100th anniversary of freedom. According to data from the ministry of defence, with a 90% private sector participation rate, Indian defence exports have surged by nearly six times in the last five years, from Rs 1,500 crore to Rs 9,000 crore. 84 countries receive the majority of these exports. According to 2020 Stockholm International Peace Research Institute (SIPRI) research, India is one of the top 25 exporters of defence products.

According to high-ranking government officials, by 2047, when India will be celebrating its 100th year of independence, the defence ministry expects to have sold goods worth Rs 2.6 lakh crore. The administration aspires to have become fully domesticated and achieved self-sufficiency in the defence sector by that time. This was discussed at a meeting with the Defence Minister, Shri Rajnath Singh, as part of the Shri Narendra Modi administration’s Vision 2047. One of the other main goals of the meeting was to increase the number of micro, small, and medium-sized enterprises (MSMEs) in the defence sector from the present 15,000 to 45,000. The minister and other officials reportedly discussed increasing India’s market share in the space economy from 2% to 15% by 2047, according to government sources. Currently, India has a 2% market share.

A $1 trillion market is anticipated in India by 2047, which will necessitate large investments in the ecosystem supporting space companies. The additional secretary for defence production, Sanjay Jaju, said that India sold defence goods worth Rs 13,000 crore in 2020-21. A top government source claims that achieving the Rs 2.6 lakh crore goal by 2047 would raise exports by a factor of nearly 20. The source added, “The government’s major goal is to increase defence exports, and a target of Rs 35,000 crore to Rs 40,000 crore by 2024-25 has been fixed.” The two most crucial exports are the HAL LCA Tejas and the Brahmos supersonic cruise missile. Both of these are being sought by numerous nations. Tejas and Advanced Light Helicopter Mark III could find markets in the Philippines and Malaysia. Talks between the two countries are currently well underway. According to the previously stated source, India has reportedly proposed to set up a production line in Egypt to make LCA and choppers and has plans to research the African market for exports. In addition, India recently sealed a $375 million deal to deliver BrahMos supersonic cruise missiles to the Philippines. Brahmos may be purchased by Indonesia, with whom it is currently in negotiations.

Hence, besides helping in military operations, our focus on Atmanirbharta and our Vision 2047 can be greatly facilitated by IoT due to its interconnected architecture and sensing capabilities especially when combined with ML. IoT can help in automated management of equipment, allowing a centralized system to control and monitor all company processes.This will give companies an unprecedented ability to oversee advances in their production in real time, while also being able to analyse historical data that they obtain in relation to their processes. Having said that it is of the essence that we understand that security will have to be a key feature of IoT whether it is being used in the defence production ecosystem or for military operations.

Modelling and mathematical complexity are two major obstacles in cyber security. The mathematical complexity of the cyber system is increased by the variety of random and probability functions. Cybersecurity offers system authentication, confidentiality, and integrity. Computing difficulty and computational complexity are subcategories of complexity. As a result, new cyber security techniques must be developed. Security is the intended characteristic of an application. Using sophisticated and safe algorithms in the defence sector can improve the performance of communication and routing systems. To this end the following actions should be taken:-

We have looked at everything, from secure IoT demands to their applicability to the kinds of risks associated with normal practise. In this technological age, the advantages of tested and validated secure applications in IoT will flawlessly commercialise intelligence and boost armed forces. With the help of technology, a wide range of assets can be managed well, complicated processes can be coordinated, and a network of strong military links can be made.

Military operations can be made even more effective by secure IoT’s linked frame and sensor capabilities. Using Machine Learning in conjunction, we may be able to gain a critical understanding of the battlefield in real-time, enabling officers to make use of the information by altering their course of action and carrying out a successful operation. Secure IoT can help the military with many different tasks, such as fighting on the front lines, spying, keeping an eye on things, and looking for and getting information about terrorist or enemy bases.

Anti-military actions have made it more important than ever before for the military and defence to use secure IoT. By using secure IoT, military and defence infrastructure can become more effective and efficient while also drastically reducing battle casualties and material losses. Secure IoT can be used for any of these from planning an operation to its execution in the battlefield, espionage activities as also search and rescue. It can also help boost our defence industrial base.

Prof. Valli Manickam  holds a Ph.D. in Environmental Science and Technology and has  Masters degrees in Computer Applications and Sciences. She is presently Professor and Director, Centre for Innovation and Technology; Administrative Staff College of India (ASCI), Hyderabad. She is also currently Dean of Training Programs (Short and Long Durations).

Dr. Rajeev Kumar is a Ph.D. in Information Technology and currently working as an Assistant Professor in the Centre of Innovation and Technology at the ASCI, Hyderabad.