Rumble in the Himalayas

Sub Title : US China ‘slugfest’ in Nepal has repercussions for India 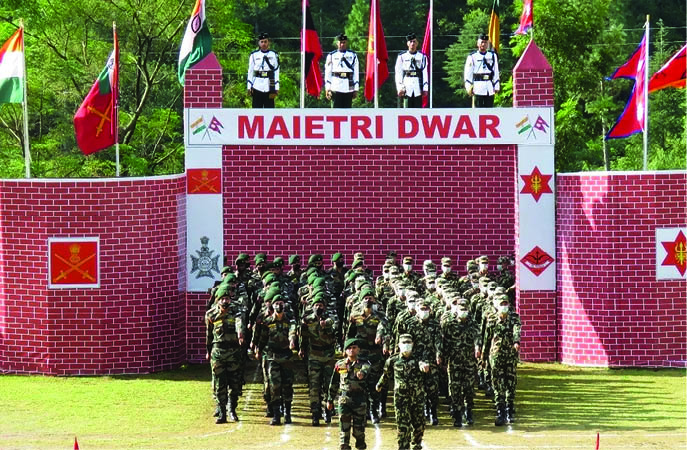 The strong opposition in Nepal to the US-Nepal infrastructure project points to a deep China hand. While the course of events in Nepal are a part of the great game between US and China, they have significance for India as well. India needs to be mindful of this and take appropriate steps to ensure the protection of its interests

Economics is said to trump ideology, however in the case of Nepal the reverse happened. The $500 million US-Nepal  pact that the Nepal government signed back in 2017 with the Millennium Challenge Corporation  made headlines globally for all the wrong reasons. The agreement signed in 2017, which emphasises on bolstering  infrastructure particularly roadways and electricity in Nepal, faced strong opposition from  not only communist parties but also from common people across the Nepali societal spectrum. However, despite facing protests the government led by prime minister Sher Bahadur Deuba decided to stand its ground and ratify the agreement in parliament amidst threats by the US development agency that inability to ratify the agreement by February 28 will lead to a “review of US-Nepal ties”.

However, the protests against the pact must be seen in the context of the growing importance of Nepal as the new destination for great power contestation between US and China.

While commentators and civil society members of Nepal paint the protests against the pact as a manifestation of public anger against the deal, there is little doubt that these protests at least the political ones had a Chinese hand. China’s influence and stakes in Nepal have increased manifold over the years. Ever since India imposed the blockade on Nepal back in 2015 to support the Madhesi groups’ claim to ratify the then constitution to give them equal representation in the Nepali parliament, the Nepali governments which have been communist all this time despite the change of leadership guard have been unanimously miffed at India. This grievance against India’s big brother attitude prompted Nepal to enter the Belt and Road Initiative of China and at the same time increase their economic and political ties with Beijing.

The fact that the Chinese ambassador to Nepal could intervene to resolve the intra- party feud within the Communist ranks of Nepal in 2020 bears testimony to Beijing’s deepening influence in Nepal. Around the same time Nepali ties with India had deteriorated to the point of Nepal challenging India by arguing that Kalapani – Limpiyadhura – Lipulekh trijunction in the Indian state of Uttarakhand is in fact Nepali territory by bringing out its own map.

Given the deep political and economic ties Nepal and China have there is little doubt that the political protests against the US-Nepal infrastructure project, which were  spearheaded by the Nepali communist-Leninist parties, had covert Chinese support and backing. China’s involvement in these protests is corroborated by its opposition to the pact when the Nepali government signed it despite indications of disapproval from Beijing. Therefore, the China factor in these protests and “popular sentiments” cannot be underestimated.

Nepal is very keen to maintain its strategic autonomy. Hence, of late Nepal, which was earlier firmly in the Indian camp, has been trying to exercise a more diverse and balancing act. However, while aligning with the Chinese, Nepal has been trying not to antagonize India much, as earning the wrath of the Indian elephant would not  be a wise foreign policy move, due to India’s economic clout, and importantly the long border that Nepal shares with India, which makes it heavily dependent on India. The Nepali political parties and the foreign policy elite in the country know this  very well. Nepal is therefore trying to extend an olive branch as well, particularly in the areas of people to people ties and economic cooperation, and thus somewhat offset the annoyance against  India shown by contesting the sovereignty of territories which are an integral part of India.

What happens in Nepal doesn’t remain confined to it, these protests against the agreement need to be seen in the broader context of Indo-Nepal ties as well. India has no doubt high stakes in Nepal not only from the strategic point of view but also the civilisational point of view. India despite friction in the  ties has a medium trade relationship with Kathmandu with a porous border along several points. The lessons therefore New Delhi needs to imbibe could be the following-

Firstly, India must not underestimate the influence that China wields in Nepal, while the Indian political elite in the past had taken for granted its ties with Nepal, China didn’t do so. It slowly but surely increased its footprint across the Nepali society. The fact that China is in a strong geopolitical position in Nepal points to its deft diplomatic and ideological indoctrination of the Nepal political and financial elites.

Secondly, money power does matter. Notwithstanding the deep cultural and ethnic ties with the Nepali citizens, India is not economically involved in Nepal at a scale at which China is involved. If India is to bolster its influence in the Himalayan country, then it must emphasize on increasing its economic footprint in Nepal especially in the infrastructure sector, renewable energy, information technology etc.

Lastly, the age of empires is long over. New Delhi must not take its neighbours for granted, the reason why India has seen its influence wane over time in the South Asian neighbourhood is due to its bossy attitude, Indian foreign policy in the recent past has been less accommodating and more imposing. New Delhi must remember that despite being the undisputed economic and military hegemon in South Asia, it is not the primus inter pares of this region but only a country. India therefore must treat its neighbours as equal and sovereign partners with the emphasis on equality and equity in ties. India must in this context follow the Gujral Doctrine developed in 1996 by the then foreign minister Inder Kumar Gujral which emphasised on the fact that since India faces the possibility of a two front war so it should ensure that it is at peace with all of its other neighbours.

While the course of events in Nepal point to be a part of the great game between US-China, it has deep significance for India as well. Hence India must watch the events carefully while at the same time maintaining a calculated diplomatic posture.