Sub Title : A need to revisit our capability development programmes 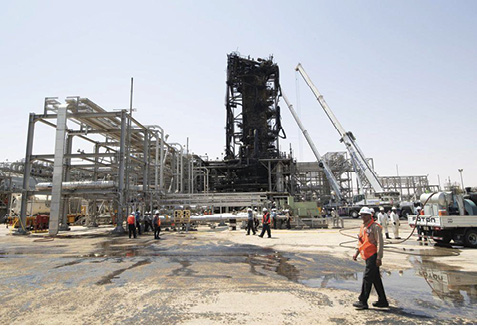 Disruptive technologies and precision weapons are repainting the canvas of warfare. It is time that military planners take the new threats with the seriousness they deserve. Conventional array of forces in their present dispositions are going to be mostly incapable of countering these new threats. We need to revisit our capability development programmes

The pre-dawn attack not only knocked out over half of the country’s oil production, or about 6% of daily global oil production, it also removed almost all the spare capacity available to compensate for any major disruption in oil supplies worldwide. The kingdom has for years been the only major oil producing country that has kept significant spare capacity that it could start up quickly to compensate for any deficiency in supply caused by war or natural disaster. Total OPEC spare production capacity stood at 2.3 million barrels per day in August 19, according to the IEA, almost all of which was likely held by Saudi Arabia. Most other countries cannot afford to drill expensive wells and install infrastructure, and then leave it idle.

President Donald Trump responded tweeting that the USA is “locked and ready” to retaliate and it is awaiting Saudi Arabia’s assessment of the damage suffered in the drone attack. Meanwhile a newspaper headline aptly termed the situation as ‘The World is on Edge’ (Express on 18th September 2019). Russia warned against ‘US rushing to judgement’, while UK & Germany asked for substantiating evidence for determining launch points or responsibility. The Chinese stated that ‘no one should name anyone without conclusive facts’. Iran denied that any launches came from its territory. The Houthis of Yemen claimed responsibility for the attacks stating that they had employed 10 UCAVs. However this is being doubted, as a Saudi military spokesman brought out that actually 17 separate hits had taken place. US experts also candidly acknowledged that there were more strikes, which did not hit the target, and that the strike package involved at least some cruise missiles as well as drones or were all cruise missiles.

Saudi Arabia has a share of 12% in the global oil production. A disruption of 5.7 million barrels per day of this supply led to an immediate price response. Initially there was a 10% surge in global oil prices, which has since stabilised at lower levels. Brent Crude oil futures rose by about 20%. The global impact can be gauged through the effects on India, which imports 80% of its oil. A price increase of one dollar per barrel adds $ 2 Billion to India’s annual oil import bill. Due to a higher demand for dollars the rupee would weaken, causing a current account deficit (CAD). It is estimated that an increase in oil prices by 10% would cause a CAD decrease of 0.4-0.5% of GDP. This also impacts the subsidy bill and inflation, finally having a negative effect on social spending. The good news is that the Saudi Energy Minister has stated that they are aiming to normalise oil supplies by end of the month. As a report correctly termed it, the Saudi oil attacks won’t devastate the global economy, but the aftermath could. The real risk is not the attack itself, but rather the potential with Iran to assault vital energy infrastructure. The possibility of an escalation in tensions between Iran and the USA and its allies in the region have also shot up. The blame & response eddies are threatening to turn into whirlpools sucking the players further down. Also there is a necessity to minimise vulnerability to follow on strikes, which could further limit production. These new forces will have a substantial cost attached to their raising, leading to a further locking down of resources.

Military Analysis. In the present attacks the scale, planning, sophistication, displayed military prowess and the future effects are indeed a cause for serious concern. The oil facilities at Abqaiq-Khurais are about 500-600 km from the launch sites in the Iran-Iraq region and about 800-1000 km from launch sites in Yemen. To reach this target area a cruise missile would have travelled for 45 to 60 minutes (at 800 kmph), and a drone would have flown for 2.5 to 4 hours (150-200 kmph). There were a total of 25 drones or LACMs used, which infiltrated undetected, evading the Saudi wide area interceptor SAM radar network. Ballistic Missile Defence is as such for different types of threats, and would have been ineffective. Also it is unlikely that the flight profile used was along a straight line. Drone and LACMs can move along multiple waypoints, which are chosen to maintain secrecy and optimal target approach angles, amongst other factors. Movement of such an offensive swarm over a couple of hours in hostile territory requires effective control, preferably passive encrypted communications, higher military skills to plan, coordinate and execute. The final effectiveness of the attacks indicate the high precision achieved, which is further indicative of the use of sophisticated terminal guidance on board.

This large scale operation was successful in a region having large scale deployment of US made defensive & offensive weapon systems using high end technologies, and multiple US bases in Saudi Arabia. This prompted the Russian President to wilily offer an effective counter weapon to the Saudis viz S-400; the offer was made in the presence of Turkish & Iranian Presidents, bringing wry smiles from them and grins from the audience. If Iran is involved, it has effectively made a bold statement and for the moment has put the US-Saudi leadership on the backfoot in the region. Though much of the Great Game is yet to be played.

Future Security Imperatives. These precision attacks should rightly be taken as a clarion call to shape national security preparedness for countering the shift in the nature of wars, which is already upon us. The contours that are emerging are firstly that deniability is being increasingly used as a strategy option. We see that ambiguity still exists in zeroing onto the actual perpetrators who continue to deny their role, while aiding and abetting attacks through non state actors or militant groups. Secondly, the threats in being are veering towards battles of attrition from the shadows, till they are strong enough to fight outright battles of occupation. This is the new guerrilla warfare stratagem, sans morals and honour. Civilian structures, strategic economic assets and population centres are easy game which are being increasingly targeted. A study of present day conflicts  highlight a definitive reality that the world is seeing an increase in ‘grey area’ wars; low intensity conflicts which disruptively turn the advantage of asymmetry in force dispositions upside down by not engaging in direct one to one wars, the costs of which would be horrific for all. A prime example of the use of both these factors is Pakistan which has perfected the use of terrorism as an instrument of state policy, and which then unashamedly denies its complicity. Thirdly, non-state groups like Al-Qaida or Jamaat-ud-Dawah and states with fragmented authority like the Houthis in Yemen or the ISIS, are using ingenuous methods, improvised tactics and new age technologies to accomplish their aims. In spite of standing up against formidable military powers, these groups are improvising to attack elements of national power & prestige of their opponents. We have earlier seen this happening in the 2001 New York (9/11) attacks, in the 2008 Mumbai attacks, in the 2016 Brussels bombings, in the 2016 Bastille Day attack in Nice, in the 2018 Sri Lanka Easter bombings and now in the Abqaiq and Khurais attacks.

Whom should the conventional military forces respond against? An all out war or an invasion may not bring desirable outcomes in the medium to long term perspective. In fact, escalation though probable could turn out to be de-stabilising. In the present scenario, while both Saudi Arabia and USA possess military capabilities to strike Iran, yet this would make the Saudis vulnerable to further attacks on their oilfields, electricity generation centres, de-salination plants, and in fact escalate the tanker attrition in the Persian Gulf region. This could be crippling for the global economy too. These are not easy decisions, as previously learnt in Afghanistan, Iraq & Syria. The Saudi oil attacks also made a strategic statement in challenging USA and its hitherto fore supremacy in the Gulf. Also importantly that it is not the US alone that possesses precision strike capabilities, which effectively disrupt the war winning advantages offered by air superiority not too long ago.

What is most worrisome is the spread of drone and missile precision strikes to other global conflict zones. Military planners need to factor in this new reality very quickly. Advances in rocket / missile technologies, proliferation of UCAVs & other WMD’s could improve the odds a bit for the underdogs, in the grey area wars looming ahead. Cyber bot attacks, network takeovers, AI based weaponization are also lurking around the corner. The conventional array of forces in their present dispositions are going to be mostly incapable in countering these new threats. Are current capability development programmes or modernization roadmaps adequately countering the new threats? Today for any respectable military, there is an overriding necessity to bolster its own unmanned precision strike capabilities using cruise missiles, supersonic velocity terminally guided rockets, hunter-killer drones and related C4ISR capabilities. Though there would always be a need for large standing armies, but a future ready force needs to be agile, capabilities based and less force centric – relying more on speed of deployment. Most armies are still tweaking superficially only, while zealously holding onto the number of boots on ground, which in itself is constraining modernization. Counter strategies, new force organisations and new weapons are needed to keep pace with Moore’s Law. Till then terror will have its day.