Sub Title : A Kaleidoscope of Thoughts 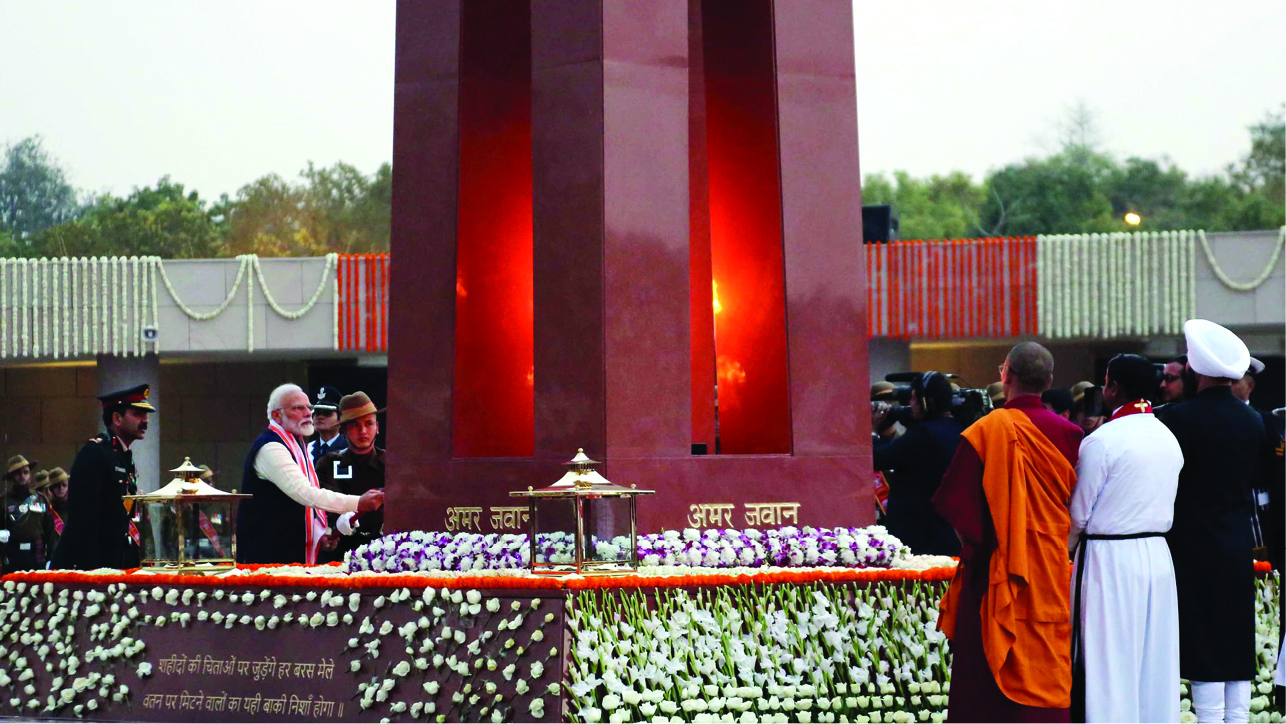 On 26 Jul each year lots of people get confused whether to celebrate the victory of the Indian Army at Kargil or condole the death of 527 braveheart warriors who gave up everything for their motherland. Many ask me this question; whether it is right to celebrate victory attained through such large scale loss of human lives? That is when we have to be rational in our responses. Death on the battlefield for a warrior is a kind of ‘moksha’. ‘Lament not the death of a soldier, for he who dies in battle is greatly respected in heaven’ is the famous quote inscribed on the Garhwal Rifles War Memorial at Lansdowne. Soldiers do not lament; they mark, observe or honour sacrifice and that is the spirit with which battle honour days and such events are celebrated. A quiet wreath laying, a ‘sarvdharm sthal’ ceremony and then some ceremonial and celebratory events such as SainikSammelan and Barakhana. That is the rationale to be explained if someone questions you on why soldiers celebrate a day on which loss of lives occurred.

Two anniversaries fell in the last week of Jul 2021; Kargil Vijay Diwas on 26 Jul, and of the Rajiv-Jayewardene Accord on 29 Jul which effectively launched the expeditionary Indian Peace Keeping Force (IPKF) to Sri Lanka under codename Operation Pawan. The former is celebrated officially with wreath laying at all war memorials around the country, webinars and seminars for schools, NCC and various patriotic bodies. While 527 soldiers were killed in action in Kargil, 1200 or more never returned from Op Pawan. Yet nothing is done to remember them nor is another day marked from the annals of the IPKF experience to honour the fallen. Victory or loss is immaterial, as much is the political colour of an event; these were India warriors who sacrificed everything and the ownership of these events is Indian. This year some veterans decided to contribute personal funds and conducted a wreath laying ceremony at the National War Memorial to commemorate the sacrifice of those who were killed in action in Op Pawan. This should hopefully become a norm because such honours are also not given to those who fell during 1962 or the various counter insurgency (CI) operations that the Armed Forces have conducted since 1947. The Navy and Air Force must be incorporated into this and each such ceremony must reflect simplicity, refinement and equal concern for all who made the supreme sacrifice. The Armed Forces must do some soul searching on the entire gamut of honouring their fallen brave hearts and perhaps earmark a suitable day for each conflict and one for CI operations through the last 75 years. The Government does not have to take any decisions in this regard but even if it were to give official sanction it will only strengthen its hands.

There is a lot of criticism of Operation Pawan and the very decision to launch it. Public knowledge on this is sketchy hence informed opinion has taken a back seat. The fact is that the 29 Jul 1987 Accord came about after a bit of military muscle flexing by India through the airdrop conducted by the Indian Air Force to demonstrate India’s willingness to assist the minority Tamil community under any circumstances. Three main issues were agreed upon in the Accord which launched the IPKF in a purely peacekeeping role.  First was the return to barracks as far as the Sri Lankan Armed Forces was concerned. Second was the disarming of the cadres of the LTTE and third was the devolution of powers to the Tamil minority. It was naïve on our part to imagine that the LTTE would surrender itself completely after almost 15 years of strong resistance against the SLA. As soon as it became evident that the LTTE would do nothing of the sort our top military leadership imagined that the well trained and structured Indian Army could disarm it in a couple of days. Again, arrogance and being out of sync with reality on the capability of the LTTE and its approach towards India, gave us this erroneous notion. It took us a six week long intense, near conventional operation with heavy casualties, to evict the LTTE from its Jaffna stronghold. In all this what stood out was the fact that we were strategically surprised by the situation and our response was jerky and attritional. The early part of the Jaffna campaign shook us and embarrassed the military leadership which then did not apply itself sufficiently but rather resorted to ‘push at any cost’ operations which were completely attritional. We never got down to studying the lessons from Op Pawan although I remember participating in a detailed study with a team composed by the Bison Division. Those documents are, I suppose, lying somewhere in the dungeons below the Military Operations Directorate. It should be known to the public that the experience gained in Op Pawan helped us immensely in fighting and winning against the hordes of terrorists who suddenly entered J&K in 1989-91. Our battle drills and small team tactics improved a great deal against a live enemy the LTTE. I had served earlier at the LoC but what I imbibed in Op Pawan no other operation came even near it in terms of learning and professional experience.

Since 1987 we have been strategically surprised at least twice if not three times. First in 1999, at Kargil. That is when we threw ourselves at the Pakistani Army to regain the territory occupied. It was attritional again without a thought towards better maneuvers; the laid down political terms of reference regarding the crossing of the LoC also led to this. Then came the 2008 Mumbai terror attack and finally the Chinese saga at the East Ladakh LAC in 2020. Mumbai 26/11 proved to us how limited our options were below the nuclear shadow. Our lack of aggressiveness and necessity to pursue quid pro quo as a policy became very evident. I do not consider Uri 2016 and Pulwama 2019 as strategic surprise as these took place in the ‘warzone’ with the run of activities and our response though in the strategic domain was within the operational-strategic mould. The Chinese transgression in 2020 did cause strategic surprise. In many ways it was our inability to read the developing situation. Against China we had previous experience of the PLA keeping a low profile strategy and not attempting to aim too high. A transgression leading to salami slicing was its concept. Our failure was the inability to think below all out conventional war as options of the PLA. We seem to think that the PLA would only resort to large concentration with the aim of territorial gain and roll back of the LAC. That it could execute coercion and wolf warrior diplomacy to achieve its aim of cautioning us and dent our strategic confidence was never an option that we may have considered. All that could be done with the lower strength, the type the PLA deployed for its Ladakh rogue action. Therefore lower levels of PLA concentration perhaps did not set alarm bells ringing when events cascaded in 2020. The pandemic of course also diverted a lot of attention. That should not really happen when you have professionals dedicated to operations and intelligence whose job is to observe, read, imagine, dream and monitor all that is happening on or across the border in a given area of responsibility and war-game it with their superiors and peers.

That brings me to the age-old issue of domain specialists versus generalists. I have of late been focusing a lot on the history of conflict in the Indian context. I am surprised that in the 50th year after the grand victory of 1971 there are simply no events being organized to discuss the 14 Day War. By contrast in 2015 every think tank was conducting a program analysing different battles of the Indo Pak Conflict 1965. In the age of webinars and with considerable progress in public knowledge in strategic affairs it is strange to see this intellectual lethargy. During a visit to Srinagar when invited to speak to the officers of 15 Corps I chose the history of the J&K proxy war as my subject because I knew none ever look at the tenures before theirs and there isn’t enough material readily available to enrich their knowledge. We cannot apply yardsticks of academic research done in universities in peaceful areas in other parts of India but a short official history of the proxy war must be written to empower the serving officers. I made a 71 minute video talk analysing the strategic environment of J&K from 1947 to 2020 (less the post Article 370 period) for the Brains Trust organization under the British High Commission. It gave the Indian narrative which may be of great use to the military officer cadre, Indian embassies and High Commissions the world over and many academics too. It’s been hugely appreciated and is acting like a text book on the strategic environment of J&K. Video talks on Ladakh and one more on the Post Article 370 Abrogation are on the drawing board. It is the knowledge of history, culture, demography, military geography, economics and identified sensitivities which really make for domain specialization. I think we should shelve that debate now and act upon a policy towards creation of regional expertise among staff and commanders.