Sub Title : Credit for 1971 victory has gone to the right quarters 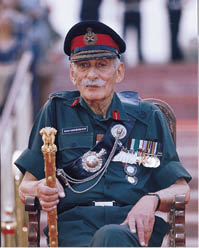 An unsavoury controversy has been raised about an existing narrative on the Indo Pak War of 1971. Some individuals, not wanting to attribute credit to Field Marshal Manekshaw for his stellar  role in the considered decisions taken about not launching operations earlier  than Dec 1971, are trying to give a new spin to the narrative. The author presents the proper perspective

It amazes me why an unnecessary controversy has been raised about an existing narrative on the Indo Pak War of 1971, that too in the 50th year after the grand victory.  The narrative outlines that it was General (later Field Marshal) Sam Manekshaw’s advice to Prime Minister (PM)  Indira Gandhi regarding certain key factors about the timing of the war with Pakistan that led to the decision not to militarily intervene early in the then East Pakistan. Two recent books attribute the delay in the launch of India’s military plan in 1971, to only PM Indira Gandhi with no credit to Sam Manekshaw.  ‘Interwind Lives: PN Haksar and Indira Gandhi’ and ‘India and the Bangladesh Liberation War: The Definitive Story’ are the two books by Jairam Ramesh and Chandrashekhar Dasgupta respectively which challenge the existing narrative and attribute the idea and the decision to only PM Indira Gandhi. One of our best military historians Air Vice Marshal Arjun Subramaniam very correctly joined the issue by writing in the Times of India on 28 Nov 2021 and created a ‘counter counter narrative’. He actually picked on the right issue, the one calling the Field Marshal an effective raconteur. Dasgupta the author of the second book mentions that the attribution to Manekshaw regarding the alleged advice to PM Indira Gandhi to delay the military action emerged due to Manekshaw’s superior skills as a raconteur. In other words, it is spin more than anything else which is responsible for the larger than life attribution to the Field Marshal; at least that is what the author seems to think and goes on to suggest that the spin was generated by a man the entire nation revers.  There is no doubt that Manekshaw had a personality larger than life and could carry audiences at will but perhaps there is one thing Dasgupta probably never learnt about him. Manekshaw’s integrity to his command and his nation always remained unquestionable.    For almost 48 years Manekshaw personally spoke about his conversation with PM Indira Gandhi at various forums in India and abroad. I heard him in rapid succession at the Defence Services Staff College in 1997 and then at the Higher Command Wing of the Army War College in 1998. He was never one of those who spoke of himself. If he wished to hog the limelight, he would have written his memoirs and claimed all this there. After the passing away of PM Indira Gandhi he may have laid further claims but none of this happened because he had a certain sense of honour which the entire Indian Army acknowledged.  It is always good to analyse military history and the decisions taken at crucial moments in campaigns. PM Indira Gandhi had a gifted mind and was strong in her convictions but to credit her for fully appreciating the military and geopolitical implications of the decision and the timing about going to war with Pakistan, would be a folly. Her advisors, the famous PN Haksar, TN Kaul, PN Dhar and DP Dhar were all erudite and extremely competent civil servants. Yet crediting even them for the military advice would be quite ridiculous. Agreeably, war isn’t only about fighting and kinetics and extends into many other domains such as diplomacy. Yet there are some aspects of it which only a military commander of experience can put his finger to.

What exactly did Manekshaw advise the PM? In a lecture to the Higher Command Course in 1998 he stated that when turbulence erupted in East Pakistan, he joined a meeting of the PM (presumably the Cabinet Committee for Security) where he advised that India must delay any intent of undertaking military action in the light of the situation in East Pakistan. His opening words simply told the PM that she had not allotted enough budget for the various requirements of the Army that he had been asking for due to which the Army was not at its optimum and needed time to prepare. He emphasized that any contemplated action had to have a high chance of success and he could not assure that in Mar-Apr 1971. In addition, he mentioned that any war in Apr-May would have a catastrophic effect on the food stocks of the nation, as the movement of tanks would destroy the standing crops in Punjab and Rajasthan. The third piece of advice that he spoke of referred to the movement of formations which he felt would get adversely affected if the war extended into the monsoon period. He was all for the winter period when the Himalayan passes would not allow China’s PLA to undertake operations in assistance of Pakistan. I wonder how many of these facts were known to PM Indira Gandhi’s other advisors or to the PM herself. Manekshaw would often mention that the Defence Minister Jagjivan Ram, for whom he had great respect, actually appealed to him to reconsider his advice.

Manekshaw had the usual personal staff. Senior commanders usually confess a lot to their personal staff when in moments of privacy and even depend upon them for their advice. Lt Gen Depinder Singh who was later Army Commander Southern Command, was Manekshaw’s Military Assistant (MA) and his two Aides-de-Camp Captain (later Maj Gen) ShubiSood and Captain (later Brig) BehramPantakhi would have discussed this many dozen times. They have recorded it in three books too. One wonders whether they were ever consulted by those who allege the raconteur advantage of Manekshaw.

Two years ago, I spoke at an important think tank and did mention the Field Marshal’s advice to the PM. A former very senior government servant countered it by saying – “there is no evidence to support the claim of any such advice”. Quite obviously some people were being rankled by the importance given to Manekshaw and wished to dilute it by initiating a new narrative that it was PM Indira Gandhi’s decision based upon her idea. We have always been taught that the decision is always of the higher commander and no one can claim ownership of that unless you are the higher commander. PM Indira Gandhi was the higher commander in this case but the advice definitely came from the experienced strategic mind of the Field Marshal.

Some controversy about the authorship of the operational plan too has existed in bits and pieces but once again emerges today. Just like the analogy on the strategic decision above there have been many claimants for the authorship of the evolution of the operational plan and the changes that occurred as the battle was enjoined and the first success and failure tasted. It is not for us to comment on this but remind ourselves that the very same people who claim authorship of plans of successful campaigns would not be seen anywhere if the very same plans failed; with failure the responsibility would automatically devolve on the higher commander. In this case Field Marshal Sam Manekshaw was the overall commander; no one higher than him in the operational chain of command. He is the rightful owner of the success of the military operational plan. Everyone else among the well-known names remain subordinate commanders and staff whose job it was to evolve the plan and take the approval so that Manekshaw could have ownership of its failure or success.