Sub Title : About time the Army commenced sensitizing the nation about the challenges that its men meet on an everyday basis 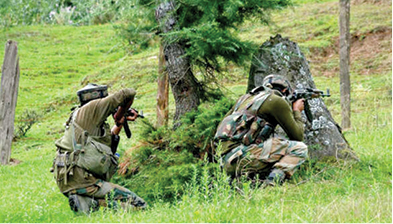 The challenges of everyday existence of the Indian Army Soldier are in addition to  the pressure of securing posts and ensuring effective counter infiltration. However, these  have not seeped into the imagination of common Indians. It is about time the Army commenced sensitizing the nation about the challenges that its men meet on an everyday basis, only then will the general populace  truly understand the meaning of the word Soldier

While India and Indians back their armed forces to the hilt, appreciate their valour and sense of patriotism and place them on a platform they are hardly aware of the reality of what the soldiers, sailors and airmen actually do. Hollywood normally creates realistic depiction of the challenges that the American soldiers face in worldwide deployment of the US Armed Forces. In contrast the depiction of the Indian Armed Forces by Bollywood is usually unrealistic with more focus on the romanticisation of the uniform and little on the reality of the challenges. I am primarily referring to the stress and trauma involved in the job of service personnel. Airmen and sailors have their own deep challenges but I shall focus more on the soldier on the Line of Control (LoC) or in intense counter terror operations to illustrate my point. It would shock many an Indian Army soldier if they learnt that the tour of duty of a US soldier or marine in Afghanistan or earlier in Iraq and was just six months. It was considered just too stressful for a human being to endure the tension, live without his family and bear the rigour of hard field conditions for periods exceeding anything more than six months. By contrast at the LoC infantry and artillery units of the Indian Army along with others in support remain deployed for three years at a stretch; only if some part of the deployment area has high altitude posts does the period reduce slightly. Full high altitude deployment the tenure is usually two years due to medical advice. Very few even within the Army would be aware about the operating conditions and logistics constraints at the LoC. That is where the public information organizations come in. They have definitely broken out of the old shackles but projection of valour through anniversaries of battle honours and posthumous awards that they are mostly involved in is not enough. The challenges of every day existence and the pressure of securing posts and ensuring effective counter infiltration have not seeped into the imagination of common Indians. Hardly is a documentary film on this available. Consider the life on a winter cut off post. Six months of restriction to the precincts of the post with life threatening issues such as high snow levels, roof cave ins, technical issues with equipment, serviceability of heating devices, the monotony of tinned food and the tension of evacuation of a casualty should an emergency arise, does take its toll of the most robust bodies and minds. These are enough to send blood pressure shooting. No mail is available at such posts as helipads exist far away and are snowed up. Units usually do deep selection of the fittest personnel and those unlikely to have problems at home necessitating leave. It’s a management of a strange kind which no management school has ever examined. Not much has been written on this either. Winter living conditions in isolated high altitude posts can be traumatic as try as one may pinnacles at mountain tops or ledges on which such posts exist have huge space constraints and the quality of living accommodation deteriorates so fast that early replacements are never possible. Most units organize a way of ensuring that a soldier manages to get a call home on the landline once in a week or so and he pays for it unlike what people may think that he talks home for free. If an emergency does develop by way of a parent, wife or child there is no way that a soldier can be brought out of a winter cut off post without threatening the security of the patrol which will have to accompany him to a pick up point. Senior commanders have an acute dilemma of decision making even for the evacuation of a medical case or a weather casualty. I once had to authorize the helicopter evacuation of an acute medical case who could have lost his life if not brought out from a snowed up post. The helicopter made a low hover on a sheer pinnacle and the casualty had to be pulled into the helicopter in bad weather conditions. The effort saved his life but could equally have resulted in a catastrophe.

Consider the life and routine of an infantry unit in slightly lower altitude especially in summer when the infiltration season opens up. The biggest challenge is rest and sleep management. In earlier years before 1989 units remained deployed in company or platoon posts with an odd independent section post; at least they were concentrated as sub units. The gaps between defences were patrolled usually by day. In today’s environment it is the gaps which pose as much challenge. Manpower constraints due to gap deployment for counter infiltration leave lesser strength at mother posts making isolation possible. That is why strength at posts is always a challenge. While new units are being raised in infantry regiments to cater for all the formations which have come up in the last five years, it always leaves existing units short of personnel strength by as much as 5-10 % and sometimes even more. Each unit carries a certain number of low medical category personnel and battle casualties who cannot be effectively deployed at the posts. Then is the strength to be deployed at the unit bases or administrative loading points. After Uri this has created an even greater dilemma. You need manpower to protect your soft rear but equally to secure your crust up front. How does one manage this? It makes management of unit personnel strength a nightmare, not just a challenge. I recall how I sent back the Flagstaff House guard of an infantry unit while it was halfway down from the deployment area in high altitude. I had visited the unit a few days earlier and realized just how stretched it was but the staff was insisting that it was the formation’s turn. The solution was found by getting a scaled down guard from an RR unit which had lesser threat in its area of responsibility. This is the kind of everyday challenges that Commanding Officers have to contend with besides the actual threats they face. It tells on their health and wellbeing. The men have little rest because nights are given to ambushes and mornings to logistics activities such as water duties, charging of batteries (the number of batteries under charging at a company post may put some Signals units to shame) and movement of rations.

Thus, when they say that experienced hands are required at higher levels of command at the LoC they are not wrong. If you haven’t been through all this, no amount of briefs and visits to units will ever sensitize you to it. Command then will be transactional and not transformational. At levels of command of division and corps, mindful of the challenges I invariably rang up four to six posts or HQ at the dead of night to take a feedback from personnel of different rank. The whole idea was to keep a finger on the pulse and keep reinforcing or negating my own perception from experience at lower levels. From the COs one could ascertain whether intelligence about their area available to me was also available to them in time; if not amends had to be made in the system of dissemination which at one time followed a method of sending intelligence inputs the clerical way; by surface post so that it reached the intended recipient well after the event. We put an end to that through communication of all intelligence inputs to the intended recipients by secure line and logging the same. One could make out which units were particularly stressed more by developments through feedback I received from the ground; accordingly, we could calibrate the responsibilities over and above those brought about by the concerned deployment.

The situation is not much different in the RR units particularly those which are in the more volatile areas such as Panzgam, Shupiyan or Pulwama, all in South Kashmir. The units adjoin the forest tracts of Lolab, Bandipur and Handwara are equally stretched because their response have to be razor sharp and even a little mistake in the initial contact can result in avoidable casualties. Very little has been written about the operations of the counter infiltration grid and the LoC deployment for security of posts. The political community which has to debate and take decisions knows very little beyond the fact that the Army is doing a creditable job of keeping the situation in J&K stable. It is about time the Army commenced sensitizing the nation about the challenges that its men meet on an everyday basis. Only then will the uninformed adulation transform to total admiration for the right reasons and perhaps even draw better human resources material to its ranks.

I regularly meet young and aspiring film makers with tremendous zeal and itching to make a film related to the Army’s various challenges. They appear to be in a quandary on how to go about it. It is about time that the public information policy of the Army was made more transparent and the organization looked upon potential writers and film makers as assets and its extended arms so that there is more information in the public domain within constraints of security.