Sub Title : Next Steps In J&K : Emulate the Indian Army 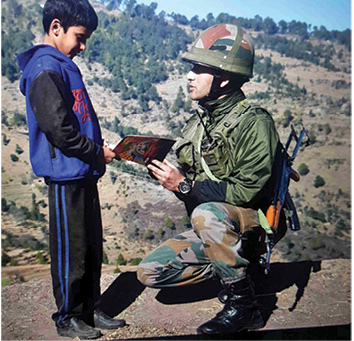 To take the Kashmir issue to a logical conclusion it is imperative that we take steps that instill in people  a sense of belonging and reduce their angst. A holistic outreach, taking a cue from the Army’s application of soft power, is required

When the Indian Army wants something done it ingrains it into the mind of its officers and men who then simply go ahead and do the needful. The context here is the role of soft power that the army uses for its operations in J&K. I am writing this piece as a sequel to my story on Kashmir in this issue because there I could not find the space to cover this all important aspect about which the Indian Army can teach not just the nation but the world a thing or two. Post abrogation of Articles 35A and 370 the nation has a choice. It can treat Kashmir akin to the way China treats Xinjiang or reverse everything the way the UK did in Northern Ireland with the economic model and exploitation of soft power. China has no bragging rights about democracy or human rights, India does; Pakistan’s efforts at painting India red notwithstanding. No doubt, today there is tendency to believe that hard power spells a nation’s capability. All you need to remember is that angry people devoid of affinity for the nation rarely forget; their response is always unpredictable. If India is to find itself on the high table internationally on the basis of comprehensive national power, the soft element of its power needs to be recognized. For doing that it needs to reach out to those who feel they have angst against the nation; that some of them have resorted to violence, been proxies of another state and generally been anti-national is not a consideration. They can all be brought on board with the right national messaging to establish an exemplary model for the world to notice and observe. This indeed is a defining moment in the handling of Kashmir after a momentous decision has been taken. To put the record straight, I continue to believe that the constitutional exclusiveness accorded to J&K prevented the right messaging to the people and gave our adversaries the handle to keep fires of separatism alive over all these years. If the nation wants to stabilize and get J&K to be a well-integrated region like almost all others in the union, it must adopt the model that the Army followed through a doctrine that the Government itself approved and financed over many years. The obstacle to enlarging this to a national effort beyond just the Army is the lack of understanding of conflict which persists in our larger psyche.

It is all about the necessary tinge of humaneness in soldiers which is so essential in operations in hybrid war conditions. Unfortunately, there are many who have simply no idea what counter hybrid war doctrine is all about. Many within the Indian Army question why they need to reach out to the people, engage them and make efforts to win their hearts and minds when all they get in return is disloyalty, stone throwing and support to terrorists.

Just remember counter insurgency operations the world over follow a few essentials which were learnt successfully in Malaya. The Americans tried it unsuccessfully in Vietnam but the British once again adopted a modified strategy in Northern Ireland where they ultimately resorted to good governance, economics as a driver of stabilization and engagement with the populace to reduce angst and antipathy for the ‘other’. At the back of all these strategies, including that of the United Nations (UN) in modern peacekeeping or enforcing operations is a broad understanding that conventional wars at borders do not create much turbulence in the lives of people except in the border areas. However, insurgencies and their spin off terror campaigns hugely affect the lives of the larger population. The insurgent or variants of them have no structured logistics; they live off the population, depending on it for safe houses for merger, providing couriers or locations for caches, intelligence about the police and army, rest and recoup and in many cases even active involvement in enhancing turbulence in the streets which acts as diversion for the police and the army. It is commonly said that without support from the populace insurgents are like fish out of water. The army and the police as a principle must strategize to prevent the population extending its support to the insurgents so that the latter are isolated and prevented from achieving their aim.

Now consider the fact that Indian Army warriors have had a complaint all along over the last 30 years in J&K. Each time we reduced the strength of terrorists and brought stability to the streets or the bush we awaited the right political initiative to exploit that situation and take it to the next level, so that integration of J&K could be well and true. Somehow the expectation was that there would be negotiation with the Separatists and perhaps even Pakistan; our thinking was stymied by these limited options in the mind. What the Government has done this time is that it prepared itself to take risk and go beyond the ordinary. It took a bold decision to scuttle the constitutional provisions which kept J&K apart. That is the political initiative and now it is for us all to take that to the next level. Winning over the angry people to our side is the next step. It may take long but that is essentially the aim. To achieve that it is not just good governance, development in various fields, more money into pockets and better employment opportunities. It is also about the minds of the people; they must be at rest in unison and their feeling for the nation must be second to none. To do that the Army’s Operation Sadbhavna was a most appropriate model at the tactical level; delivering support for governance in areas where the reach of the administration was challenging. It only took on manageable domains of education, medical assistance, women empowerment, small scale infrastructure, national integration and sports. The Army’s awareness of the social groundswell can be well appreciated by three achievements in diverse fields. Its Goodwill  Schools are a model that the populace loves but the Separatists abhor. It’s only one of the rare institutions which recognised the need for toilets for the girl child in government schools and went ahead and constructed these. Thirdly, its sponsored sports activities have kept alive sporting culture in a region where there is much demand for organised sports. All this is in the tactical domain and reflects humanism of a rare kind. Former senior commanders deserve our gratitude for never wavering from these basics. Just let this be recognised by various departments of the Government of India- exploitation of the Army’s organisational outreach will bring them all to the doorstep of the people and help reduce their angst. When diverse organisations and even government approved NGOs bring their expertise to the fore it automatically helps in engagement and outreach. I maintain that a couple of smaller rallies organised for the Prime Minister and some of his more articulate cabinet members could create much positive sentiment. It should be followed by many well known personalities of India, educationists, corporate leaders, sportsmen and Bollywood icons in direct communication with different segments of society, both in Jammu region and in Kashmir. We need to remember that Jammu too has been through a tumultuous period over 30 years. It has been a conflict zone too and its people too need a boost in confidence about their future as a Union Territory more directly under central oversight. The fact that the Government chose not to divide Kashmir and Jammu regions but kept them as a single entity is reflective of some excellent understanding of the larger issues.

In all this, I strongly recommend the specific inclusion of the Kashmiri Pandit community. It has been at a limb and more positivity needs to be brought to it. Hand holding of people affected by conflict is an essential element of restoration of stability  and conflict termination. The return of Kashmiri Pandits to the Valley with full dignity and respect is an essential element of termination and work on this must begin in earnest.

The last word to my brethren in olive greens. Your professionalism is not limited to tackling the conflict initiation, progression and stabilisation stages of hybrid conflict. The real challenge comes at the conflict termination and resolution stages. None but you can deliver the models for others to imbibe. After all military intellectualism is your forte. The more you apply it the more the nation will benefit.