Sub Title : The Code of Conduct controversy: in perspective; the veterans deserve better 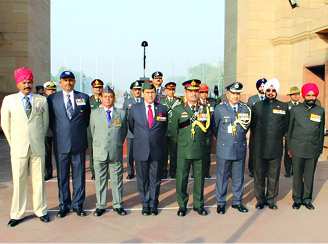 The armed forces hierarchy though aware that the issues being raised by the veterans are really common cause between the veterans and the serving; have mooted the idea of a code of conduct for veterans. There may be reasons  for things coming to such a pass, however, it would be best to resolve these across the table

The veteran community of the Armed Forces, all respected grizzled soldiers who have served with honour and won many accolades for the nation, remains one of the communities (a virtual institution) of the nation that the common man loves to place on a pedestal.  The years of service under turbulent conditions disciplines them as much as do the strict rules of conduct they lived by, many of them unwritten. The Defence Services Regulations (DSR) is a set of statutory rules and regulations, a written code but even beyond that there is a self-regulatory set of customs of service which dictates behavior and imposes a kind of honour code. The Regimental system adds its weight to all of this, and one therefore finds officers, in particular bound  down by a system which not only demands best of order, discipline, etiquette and form but also adherence to a moral code. Schooled in this for three decades and more, almost the entire community of veterans continues to follow all this to the tee mostly almost entirely by self-regulation and peer pressure from the regimental system and batch camaraderie. There are, however, stray cases of misdemeanor as in any other community of human beings. The Armed Forces veterans on exit from their respective services transit into becoming ordinary citizens of the nation with applicability of all national laws to them. They no longer exist under the respective statutory regulations which guided them during their years in service. However, they carry their ranks with the word ‘Retired’ added to their name, not their rank. It is an age old rule or call it a custom clarified by Army Headquarters in recent years through issue of a service letter which lays down that the rank granted by the President of India is to be carried with the name into retirement and even after demise. It sets the veteran community apart from the rest of the citizens thus unofficially imposing on them a demand to continue earning respect through their conduct even in retired life.

The cat was set among the pigeons on 31 Oct 2019 by the then retiring Adjutant General (AG) of the Indian Army in an interview to a television news channel. The AG, virtually the Human Resources head of the Army, spoke of a proposal in an advanced   stage of consideration by which the Army Headquarters (in fact being a Tri-Services subject, all three Service Headquarters) would draft and bring into effect a Code of Conduct for the Armed Forces veteran community. What was not said but obviously implied was that since veterans remained on the pension roll of the government their behavior and post retirement activities would be regulated by adherence to the code with the threat of withdrawal of pension for non-adherence. The veteran community responded with outrage not only on the proposal to regulate their retired existence (the second innings so to say) and to virtually control their attitude and approach towards national issues through threats of potential pension  withdrawal but also by the manner in which this sensitive news was revealed to them.

The antecedents of this proposal obviously go back to the agitation on One Rank One Pension (OROP) when the veterans felt that the serving senior hierarchy did not display enough spine to take on a forty year struggle to its culmination with the bureaucracy and the political masters. Although the government of the day granted OROP it was below the expectations of the veterans and the military hierarchy did little about it. The military hierarchy also failed to bring justice to either the serving or the veteran communities with the Seventh Pay Commission; the withdrawal of authorised rations for officers in peace stations (since restored) added salt to the wounds. There were myriad issues in between but what was really riling the veterans was the lowering of the status of those in service at the cost of other civil services. The serving community was finding voice through the veterans who did not hold back in making their disappointment evident in the media since they were free to do so. No rules held them back. The Non Functional Financial Upgradation (NFFU) issue earlier rejected by the military hierarchy has now become one more bone of contention having been granted to the CAPFs. It does not affect the veterans but it’s their voice which carries on behalf of those serving.

The icing on the cake was the Army Headquarters unsigned advisory to the Ministry of Finance (MoF) requesting that income tax exemption for disabled veterans be withdrawn. The CBDT acted immediately upon directions from the MoF without detailed examination or consultation, again angering the veterans. The military hierarchy unable to curb the rampant misuse of this privilege took the easier way out and that too without consulting anyone or looking for options to resolve the issue more amicably.  Yet another decision, setting a limit on the prices of cars sold at the MoD’s Canteen and Stores Department and increasing the interval between the purchases of cars continued the progressive standoff between the military hierarchy and the veterans.

Obviously these cascading and mostly personnel related issues have drawn up so much of the time and energy of the military hierarchy that the Army Chief is reported to have once stated, perhaps more out of frustration, that he wasn’t the Chief of the veterans and was mandated only to look after the affairs of the serving community. The irony is that today these affairs are being looked upon as common cause between the veterans and the serving; the former voicing the grievances of the latter, and the latter fully aware that veteran issues being projected  will have to be similarly faced by them one day.

No one knows what the origins of the proposal for a Code of Conduct are and who first mooted the idea. However, perception seems to prevail that by such a code the voice of dissent among the veterans can be muted and they would be unable to take up their own issues or those concerning the serving community under threats related to continuous receipt of pension being subject to ‘good behaviour’.

“This is a silly idea – not befitting the men who lead our Army (Armed Forces) if it intends to mute criticism,” tweeted Rajeev Chandrasekhar a BJP Rajya Sabha MP who has often taken up the cause of the soldiers.

The entire issue got contextualized in a different way within three weeks of the AG’s rather unfortunate interview. A veteran two star senior officer made some outlandish comments on a television panel which got the goat of the veteran community since it brought a deluge of backlash from the national environment. The crude and unbecoming comments did no good to the reputation of either the serving or the veteran community. However, it drew a number of debates on veteran social media groups whether a Code of Conduct would have avoided such a situation whereby only someone authorized and experienced enough to speak on television would have done so, avoiding the slur which was felt by the community at large. It threw open another vista which has been a point of discussion for the last few years; that of veterans in electronic media space. With no guidelines a number of veterans without requisite qualification or experience have been entering television channels to discuss national security issues. Many have been adopting political and ideological leanings and indulging even in political debates making a poor mark and doing more harm than good to the carefully nurtured image of the Armed Forces in general.

On the issue of Code of Conduct the degree of objection from the veterans may have been largely marginalized if some sort of consultation had been resorted to. Commencing from the Chiefs’ Conclave, which is an event which takes place at least once in the tenure of every Service Chief if not more; it could have been a suitable body to address this issue to. Since it is uncertain from which quarter this proposal has emanated, political, bureaucratic or simply within, it is difficult to address it. Hopefully greater sense will prevail which would lead to greater veteran-military connect on a formal level outside the bonhomie of dinners and cocktails of the half yearly Commanders’ Conferences. The three think tanks of the Services – CLAWS, CAPS and NMF besides being deeply involved with geopolitical and strategic issues  must involve themselves much more in personnel matters too and be the common meeting ground for resolution of these issues through meetings and studies jointly executed by veterans and serving personnel.