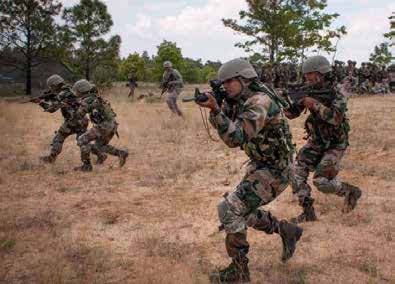 On 3 May 2020 Col Ashutosh Sharma CO 21 RR was ‘killed in action’ combating Pakistani terrorists in a village outside Handwara in Kupwara sector. Three others were also killed in the same action. Coming on the heels of the loss of five Special Forces (SF) personnel in another counter infiltration operation in the Jumagund area of North Kupwara the run of heavy casualties resulted in raised brows in Delhi. The concern was justified. Yet the commentaries and analyses that followed, about frequent loss of COs in operations were hardly informed or even semi informed ones. For record, we had lost Col Mahadik, CO 41 RR on 18 Nov 2015 and Col MN Rai, CO 41 RR on 27 Jan 2015. At intervals of two to three years the Indian Army has lost at least one CO in counter terror (CT) or counter infiltration (CI) operations in J&K. Yet apart from low key advisories issued in the wake of incidents involving such casualties the Indian Army has never attempted to rein in its cadre of COs who are considered the backbone of all effectiveness in the field. The CO is all in all, the most important figure in implementation of the higher commander’s intent and the accomplishment of the mission of a unit. His loss temporarily sets back the unit he commands. The perception prevailing in the media and the environment in general is that loss of a CO is tantamount to a military disgrace because the adversary gets brownie points which escalate his morale. As per that perception the CO, considered a father figure of the unit, should command from the safety of his bunker and never move around exposed. These perceptions are indeed fallacies because the role and the position of the CO in conventional battle are guided by SOPs which are guidelines for ideal situations to be intelligently applied. In CI/CT ops, the very nature of which is unconventional, the CO’s role and physical position is as important if not even more; and many times more challenging. A wider understanding of the entire question of the operational role of the CO is necessary for people to stop questioning the efficiency of the Indian Army each time a CO becomes a fatal casualty.

We were taught at the academy; that any commander’s position along with his party, is behind the first sub unit. At the battalion level a CO is usually positioned at the forming up place (FUP) when the leading company attacks its objective and moves up to the objective when the next company is under launch. Yet there is nothing sacrosanct about that as the very first signs of the forward company/companies wilting under pressure may bring him to the scene of the combat. Many times this tilts the battle in own favour. In most counter attacks the CO will probably lead right from the front, time and decisiveness being of prime importance.

It is in CI/CT operations where sub units are deployed as a grid there is in reality no front and no rear. The front becomes that flank where the terrorists have been contacted. Different armies have different ways of conducting such operations and many times within the same army the methods followed may vary from theatre to theatre. In J&K, over the last 30 years the method which has evolved is something like this.  Focused operations with actionable intelligence unfold with the availability of such intelligence either to the CO or to one of the company commanders. These are fleeting opportunities and delay in decision making and response will result in no contact and a safe get away for the terrorists. There is nothing sequential about these operations. A company commander may immediately launch cordon operations to prevent escape of the terrorists while the CO with his well-trained party (usually 15-20 men including radio operators) builds up to the suspected area/spot with the multi resource vehicle following close behind. The Special Operations Group (SOG) of the J&K Police, a well-trained element either latches on to the CO’s party or awaits it at the site where the company commander would have received a brief from it. This is virtually akin to an SOP but there can be hundreds of contingencies which can arise through the above process. In many cases if the intelligence is subsequently changed the presence of terrorists may be reported at another location in the vicinity. The CO’s party may be the closest to that spot. No CO in that eventuality is going to ask another company to build up a cordon or await the deployed company to reel in and redeploy. In most cases he would take under his wings a few men of the deployed company and respond to the developing situation. It happened so in the case of both Colonel MN Rai, CO 42 RR and Col Ashutosh Sharma, CO 21 RR. Circumstances brought them in close contact with the holed up terrorists. The flank where action commenced became the front and the COs happened to be there guiding and conducting operations. Some criticism has emerged about Col Sharma’s decision to enter the house where civilian hostages were being held. These are decisions none can question and are not contingent upon individual training but a reflection of personality in battle, risk capability ingrained and the power of rapid decision making. No second thought can be given and hence many times mistakes will occur resulting in casualties. I recall the operation of 9 Maratha Light Infantry in 2007 in which Colonel Vasanth, AC (Posthumous) was killed in action. Six terrorists were holed up in a cave protected by a rocky layer and all efforts to smoke them out had failed due to the cover they enjoyed. Col Vasanth felt that his presence at the spot near the LoC would give him an opportunity to review the status and plan. In the course of leading from right there he received a bullet which felled him. None of the above COs ever felt that they needed to adopt a directive style of leadership to let the flow of information reach them through different means and then give executive orders. They moved to the scene and carried out the action along with their men remaining fully aware that delay in mustering additional resources would jeopardise their mission.

The Indian Army always seeks contact. Its officer man relationship is based upon the ‘follow me’ style of leadership with officers always in the lead. The men also take tremendous risk in the performance of the task. It is this relationship based upon total trust and dependence that forms the core of the effectiveness in all operations.

In today’s operational environment in Kashmir a CO could well leave the operation in the hands of a company commander and ‘supervise’ the battle from the comfort of his headquarters. However, the complexity involved is far too much for one or two young officers to handle such situations alone. There is presence of J&K Police, CRPF and sometimes even intelligence personnel. There may even be an odd initial casualty which may cause some loss of nerve. It is therefore inevitable for the CO to be at least with the cordon and prepared to move up in most cases. His arrival is looked to with great relief by all the forces operating on ground. Does that indicate a flaw in our drills and standard of training? Not the least, although there are some analysts (including foreign ones) who are commenting upon the inability of the Indian Army to operate without its command element or work as per SOPs. To them I say stop comparing situations in which different armies operate; the rules of engagement of each army and the operating environment are different. The Israeli Defence Forces believe in small teams and do not cater to any minimum application of force or collateral damage. The US Army and Marine Corps have little qualms about the usage of armed drones even when a surgical strike with these is not possible. The Pakistan Army is well known for the use of artillery, air power and heavy support weapons in CT operations. None of these armies can match the Indian Army’s legal and ethical standards. It’s the ethics of our land, our civilization and a few brave men will endeavor to uphold those values.

In recent years, the arrival of a mob to intimidate our troops at the site of the encounter has many times led us to hurry operations resulting in mistakes and own casualties. These are extremely challenging circumstances and the terrorists, their sponsors and the over ground workers, all know that the troops come under intense pressure. To their credit the Army, J&K Police and the CRPF have learnt their lessons and tend to handle these situations very sensitively. Such situations demand the presence of the COs right there. Nobody else can take their place.

Given all the above the Army must continue to repose faith in the judgment of its COs. Advisories are a must to continue sensitizing the COs about their responsibilities but never attempt to change the ethos of leading from the front; it would be tantamount to the destruction of the spirit of the Indian Army. That is the spirit and passion which is the intangible battle winning factor.