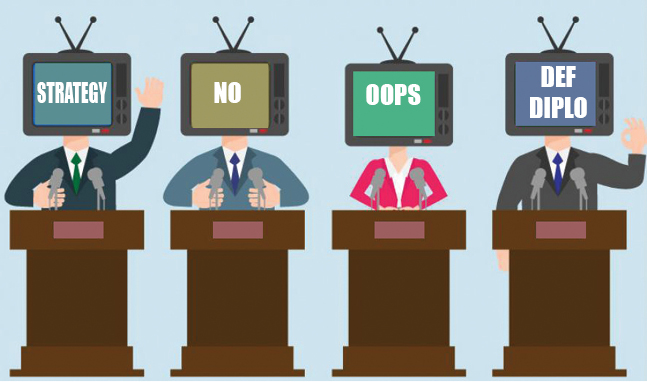 The current standoff with China has generated a lot of speculative and at times misinformed debate about the actual situation on the ground. A key element of Information Warfare is how much to share and what and when to share. It is these nuances that play a key role in the overall game; an aspect that clearly needs to be appreciated especially in context of the situation as it prevails on the LAC

There is so much advice being rendered to the Government and to the Armed Forces these days on how to deal with the threats at the Northern borders that many regular full time advisers must be feeling threatened. In earlier years there were many drawing room discussions when such events or trends emerged but hardly was private opinion so easily and widely expressed in the public domain. The information revolution has obviously made a difference and strategic culture long missing in India’s security landscape is slowly taking shape. Much of the opinion remains uninformed and ill-informed but a healthy trend is that many military veterans are expressing opinion in the print and electronic media to better educate an information hungry public. I am really not referring to the short interventions as part of panel discussions on television. These to my mind rarely make impact and there is a propensity of some veterans to get embroiled in expressing politically oriented opinion, doing neither themselves nor their service any good. It is the professional discussions involving several military veterans with requisite experience and orientation to the sector under focus which are educative. I participate in all kinds of programs but I find that a program involving only a single respondent is perhaps the most educative followed in effectiveness by non-televised panel discussions which are carried only on social media. The print interventions by senior veterans are of course extremely informative. A trend has also set in amongst the public to better understand the nuances of military operations. This is where caution needs to be exercised. Analysis of satellite pictures and maps is fine as long as this is restricted purely to the strategic domain to give a broad understanding to the public. In some cases there may have been an overstepping in the enthusiasm of winning TRPs. Tactical aspects and weaponry have been discussed but yet only rarely. All this is fine while only a standoff is in progress. The moment shots are fired and the desire to know more about the status of operations starts building up we would be stepping into the grey zone where information will have to be on need to know basis and sufficient only to understand a broad picture. Assessments by veterans in public domain must then become passé. The Government will need to consider what and how much information to part with and allow in terms of assessments.  Legal empowerment to limit flow of information will need to be considered for such situations. Many will however, argue that with information flowing from multiple sources and different communication means, attempting to limit this will be counterproductive.

In the current situation quite unlike the experience during Kargil 99 no media persons have been permitted to travel beyond Leh. So the information flowing is yet second hand and source based. What is being put out in the public domain is primarily speculative and analysis by veterans who know the ground well. Will this system hold good if there is a showdown at one or more of the friction points which exist. Will the government need to clamp down on this to enhance the level of official transparency through a system of daily briefings the manner in which these were conducted during Kargil 99.

There is a fundamental difference between the information related issues during Kargil and the current standoff. In 1999 the Government admitted intrusions along a wide front. After the initial surprise that it gained Pakistan was clearly on the run and under both international and internal criticism. Admission of initial failure by the Indian side was not an embarrassment as the limits of Pakistani intent were quickly and correctly assessed and decisions to evict the intrusion were taken. Transparent media policy helped clear the initial allegations against the Government. The decision for early operations transparently and unambiguously communicated helped in messaging Indian intent and put Pakistan on the defensive. In addition since Pakistan’s intent was deciphered early transparency in information helped put pressure on it too. Pakistan had gained surprise but that was offset by quick decision making.

In the current situation the biggest challenge has been about reading and assessing the Chinese intent. Given the international environment with the Covid 19 pandemic raging too many different assessments are doing the rounds internationally. Secondly, unlike the LoC the LAC remains vague although we have our perception quite clear. Piecing together the events at friction points, spaced widely apart, and creating a clear picture of these along a fuzzy LAC which is not physically manned at all points has remained a challenge. Under the circumstances the lack of ground clarity and adversary intent has left the Government hard pressed. In my view it is only fair that the Government makes no official statements due to this lack of clarity. Besides that a situation in which a decision to engage in military to military talks to defuse the situation has been taken, is quite different to that where a decision has been taken to evict intrusions. These talks can get compromised if inadvertent official revelation of information takes place. It can be argued by some that speculation (as has been rife by some analysts on basis of private source reports) may be worse than transparency leaving the public confused. In a democracy such speculation by an open media is acceptable. With no official communiqués to comment or help take a line from, the adversary has speculative reports from our side to act upon and the risk of acting on these can be considerable.  China follows the doctrine of Three Warfares – media warfare (including information warfare), legal warfare and cyber warfare (including psychological warfare) as part of its overall strategy of aiming to win wars without fighting them. However, the information part of its strategy in the current situation has clearly taken a backseat. Why then should India follow a transparent information policy? Whatever information, being put out should be with a purpose which has been thought through.

Is the Army capable of handling information from a professional angle? In fact it is a professional responsibility that the Army must undertake, to advise the Government because information forms an essential part of military planning. The quantum of information at different levels that the Army possesses in such situations is immense; it is a question of how prudently it is handled. This aspect needs to be built into our various war games at different levels.

On another note, if by now the Army does not have fact finding and analysis teams visiting the operational areas to get a firsthand feedback from officers and men on ground, it is already too late. A temporary lull exists and this is the time when both memories and enthusiasm are alive. Faculties of all Category A establishments should be having their curiosity fired up. Necessary literature must be drafted on an emergent basis to communicate the lessons learnt thus far. While on this, it may be worth considering the setting up of information/media divisions in most of these institutions to start learning and then teaching something more about information proficiency.