Sub Title : Why the Management of the Veteran Community is Posing Such a Challenge? 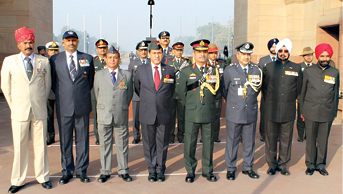 Military Veterans deserve respect and caring. Unfortunately these issue have been given a short shrift by the powers the that be

I am acutely aware that I am touching a hornet’s nest but the intent of this essay is only to pose a few questions to the military veteran, political and bureaucratic communities besides hopefully initiating a healthy debate on what is slowly emerging as one of the most intractable social problems in India – the management of the huge military veteran community. It is a vociferous community; one which feels aggrieved at most times and perceives neglect by almost everyone. It accords to itself prominence beyond normal acceptance by some in society. It’s not something peculiar to India and is actually a worldwide phenomenon; yet India does have its peculiarities and the size of the community is growing by the day.

The age old adage of soldiers being remembered at time of war and forgotten otherwise may not entirely apply in today’s world. Many prominent armed forces of the world today are constantly at war of a different kind, forcing the soldier to be in the mind’s eye at most times. In India, the Army in particular has its soldiers in frequent tenures of operational duty in far flung areas or performing duties in different counter insurgency areas, where privations are intense. The 24×7 electronic media and minute to minute social media, has taken away to some extent the ignorance about the challenges that soldiers face. There is a growing emotive connect of society with serving soldiers but institutionally this is not evident to the extent desirable by the veterans.

The issues range from esteem needs, welfare, compensation for privations suffered, disability and medical needs. Surprisingly the same issues are today applicable to serving soldiers as much as they are to veterans and families across both. Privately or publicly most of our countrymen remain in awe of the nature of responsibilities and sacrifices of the military profession. Incidents in CI operations and at the LoC brought live to drawing rooms lead to empathy and private respect. Apart from a few good Samaritans society at large is insufficiently sensitized by these to do anything collectively. Politically there is noise but nothing more because as a vote bank the serving and veteran communities have yet to establish themselves as a common voice. While the serving soldiers have restrictions on their public utterances these do not apply to the veterans. Yet attempts by the veterans to speak on behalf of the serving community is not much appreciated; admittedly this is so at the senior ranks where the serving leadership finds itself sandwiched between the veterans and the political masters. Finding a political voice for the veteran community will always remain a challenge unless more veterans acquire political gravitas which is a difficult call.

The recent misreported instance of the current Army Chief stating at a Veteran’s Day function, that he is not the Chief of the veterans, is a typical example of how the relationship is being viewed. Social media twisted a brief conversation to smear the Chief but this is something the environment will need to get used to in a world where there are enough people to create negativity.

On one level the attempt by government to look after the veteran community appears genuine but two things come in the way. First, the political community has no military orientation. George Fernandes as Raksha Mantri (RM) introduced the system of sending officials from his ministry to spend a few days at Siachen to have a better understanding while examining cases of the armed forces. An effort to get the Parliament’s Secretariat, some years ago, to nominate a few young parliamentarians to attend the National Defense College came a cropper. Second, the bureaucracy remains a power unto itself refusing at many times to execute directions of the political masters or even implement court directives when it comes to issues involving the armed forces. The man in uniform constantly witnesses erosion of his esteem as ‘defence civilians’ who work to support the military often seek primacy in everything. The case of the BRO’s civilian cadre attempting to foist itself over the uniformed officers is a prime case. I have even had civilian personnel from the MES meeting me during journeys and stating that they are from the armed forces community. Nothing wrong with that but the military uniform everywhere in the world gets a certain exclusivity for the sheer nature of the job and the oath that only military men take – to sacrifice their lives if necessary, in the course of their national responsibility. It’s this exclusivity which the serving and the veteran communities in India seek but do not get; that frustrates them leading to low motivation and self-esteem. Tell a non-uniformed person in the street about this plight and he gets livid, even questions the understanding of the political community but can do little to bring change. The media highlights some of these things, not all and there are enough media personalities who perceive they know the business of national security better – good for them – and are unwilling to go beyond a point to press home the genuine grievances of the service community. They have to live with the bureaucracy and the political community too. I wonder if ever, issues regarding the continuing defiance of the RM’s directions to stop contesting disability cases judged in favor of litigants have been taken up by a television channel. While we have discussions galore on J&K and acquisitions for the armed forces, never do you find one on disability issues of the armed forces. It can be dismissed under the age old belief about news being ‘news worthy’ to be discussed. Veterans do not demand off the channels that such issues be highlighted as national security issues too, alongside other issues.

Politicisation of servicemen’s issues is something which will fetch nothing. Whatever gains have to be made must be made through consensus. Other democracies with the military subservient to the political authority have prevented a conflict between the bureaucracy and the military by ensuring that servicemen’s rights are dealt with legislatively or at least institutionally. The example of the UK is particularly interesting. An Armed Forces Covenant was drafted by the UK Armed Forces, discussed over time with the government and finally accepted politically without legislation. “The phrase ‘military covenant’ refers to the contract that is supposed to exist between servicemen and women and the civilians on whose behalf they are willing to die”, wrote The Guardian. “It is an informal understanding, rather than a legally-enforceable deal, but it is nevertheless treated with great seriousness within the service”. Given the UK’s typical convention related constitution the commitment to the Covenant came into being in 2000 and has been under constant refinement. Under the Covenant the Ministry of Defence states “In putting the needs of the Nation, the Army and others before their own, they forgo some of the rights enjoyed by those outside the Armed Forces. So, at the very least, British soldiers should always expect the Nation and their commanders to treat them fairly, to value and respect them as individuals, and to sustain and reward them and their families.” It speaks much for the larger understanding of the people of the UK which has seen very large segments of its populace participate in war effort at different times. Can something such as this be enacted into law in India. Surprisingly, none from the Services community has ever examined this. Not one of the various associations.

Due to the above incompatibility between military culture and the world outside in India, the inability of the military veteran community to suitability adjust to the outside social environment, the absence of any efficient institutional system to make more effective use of the services of this community and the lack of political sensitivity to it, I do think the issue needs to be handled differently. We perhaps need to get back to some older suggestions; the setting up of a Veteran Commission being one of the major ones. A legislation of the type existing in the US since 1944 may also give a pointer to what could be examined here. The Veterans’ Preference Act is a United States federal law passed in 1944. It required the federal government to favor returning war veterans when hiring new employees in an attempt to recognize their service, sacrifice, and skills. It has been amended eleven times to bring into line with the requirements of the veteran community returning from combat duty. In India we still have no uniformity in the way combat experienced veterans are recognized by the various states.

There are just too many issues to enumerated in this space but more than anything else what is needed is clarity about the various needs of the situation. We cannot have issues being raised on whims every other day. A good step has been the establishment of the Veteran’s Cell at South Block. However, the MoD’s Department of Ex-Servicemen remains a major stumbling block in establishing any confidence between the government and the community of veterans. This needs to be highlighted through more discussions in media and sensitization of the political community.

There is enough negativity in the environment about the entire issue of the veteran community and to an extent about the service conditions of serving soldiers. There isn’t any need to add more. What the communities require is to garner the support of the people who definitely have the right attitude towards their uniformed brethren. When none else are there to support the soldiers surely the people of India will rise to the occasion and bring their shoulders to the wheel.