Sub Title : Details of the unstated purpose of the exercise 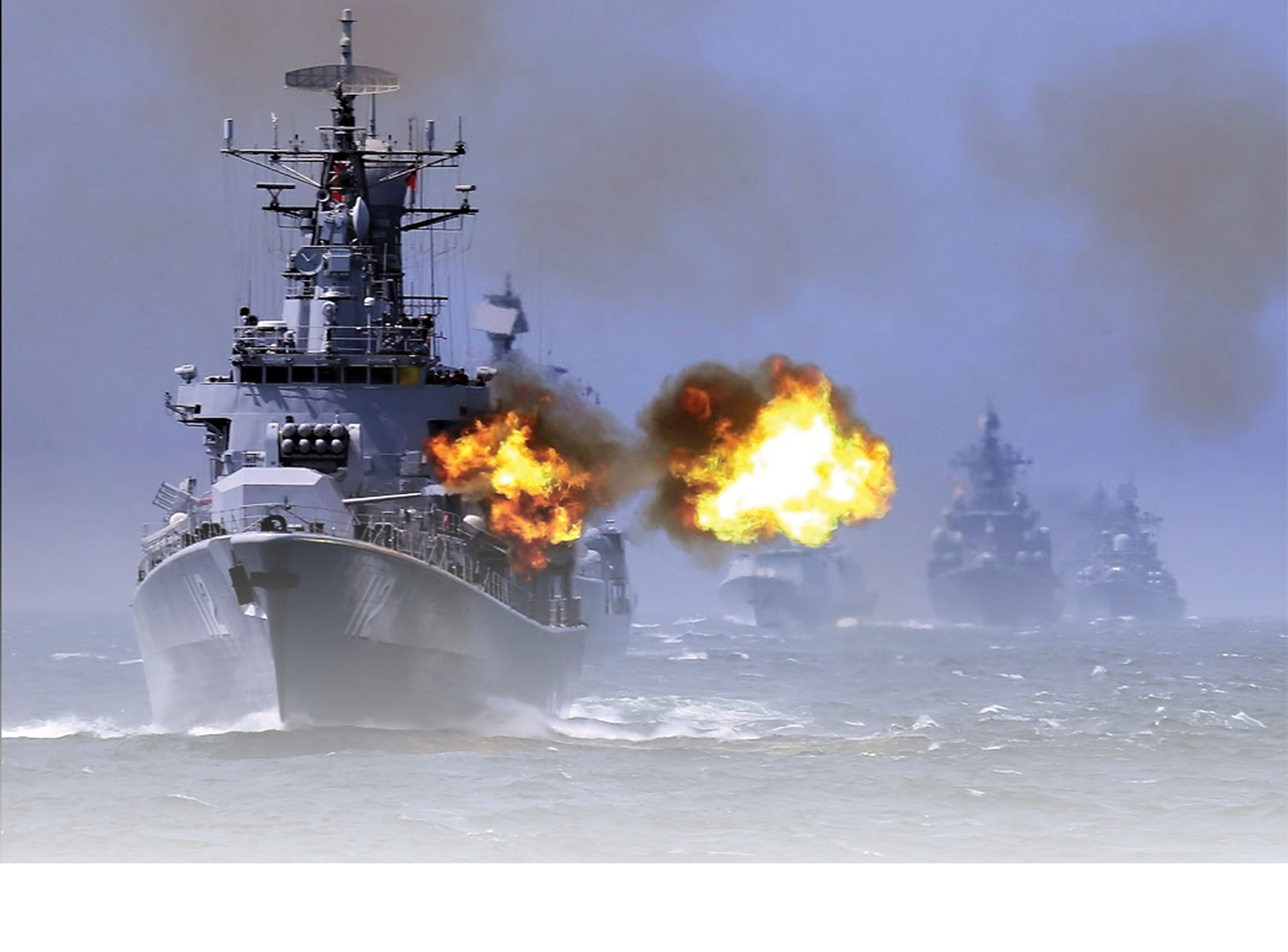 China and Pakistan recently conducted a  joint naval exercise  called Sea Guardian 2020; the joint exercise is an annual feature  with the series commencing  in 2014. The exercise though routine in nature, apparently has certain unstated aims. The article delves into the same

Amid US Iran tensions in the Persian Gulf, China and Pakistan conducted  a joint naval exercise in the north Arabian Sea for nine days. Code named ‘Sea Guardian 2020’, the exercise is an annual feature, and these were started by the two sides in 2014. It is useful to mention that joint exercises are regularly conducted between the Chinese and Pakistani militaries; the armies conduct ‘warrior’ series of exercises and the air forces have named their joint engagement as ‘eagle’ series.

At the time of the exercise, India had put to sea its aircraft carrier which led to speculations that it was in response to the Sea Guardian 2020 exercise. According to Indian media sources it had ‘a strategic objective’. By all counts, the carrier was deployed at sea to carry out trials of the Indian-built prototype Light Combat Aircraft (LCA-N) Tejas built by the Hindustan Aeronautics Limited. This twin-seat trainer naval variant LCA successfully took-off and landed on the deck of INS Vikramaditya.

However, it is fair to assume that the Indian Navy may have deployed a number of ships and aircraft to monitor Sea Guardian 2020. This is not unusual given that it is a common practice among majority of the navies across the world. In this case, the Indian Navy is operationally pitted against both the Pakistan Navy and the Chinese Navy, and the latter frequently operates in the Indian Ocean.

Sea Guardian 2020 exercise can be labeled as routine, given navies across the globe conduct joint manoeuvres on regular basis for a number of reasons such as sea lane security, responding to non-traditional threats and challenges and interoperability which is part of their strategic mandate under bilateral agreements and understandings.

At the joint naval briefing for Sea Guardian 2020, the Pakistani spokesperson stated that the exercise involved ‘joint tactical drills and naval manoeuvres to deal with a variety of threats at sea’ and spelt out three purposes of the exercise to include ‘extraordinary dependence on the seas for trade, operationalisation of the China-Pakistan Economic Corridor (CPEC), and strategic location astride the global energy highway’. From the Chinese side, Senior Captain Zhou Han Wen of the PLA Navy said that the main purpose of the exercise was to ‘enhance bilateral security cooperation to develop Pak-China all-weather strategic partnership’.

However, at least four issues merit consideration. First, the inclusion of a submarine rescue vessel the Liugongdao in the manoeuvres gives an impression that the Chinese submarine may have been lurking around in the north Arabian Sea and it may have been planned to make it  participate in the manoeuvres and afford an opportunity for the Pakistan Navy to familiarize with such a vessel given that Pakistan has placed orders for eight S20 diesel-electric submarines from China. These are based on the Yuan-class (Type 039A-series) design. Four of these are under construction in China by the China Shipbuilding Industry Corporation (CSIC) and are likely to be delivered by 2022. The remaining four will be constructed in Pakistan by the Karachi Shipbuilding and Engineering Works (KSEW) and are planned to be delivered by 2028.

Second is about Pakistan Navy preferring a bilateral naval exercise instead of joining any coalition or grouping that targets a particular nation and in the current situation it is Iran.  Pakistan did not accept an offer of joining the China-Iran-Russia naval coalition exercise labeled as ‘Marine Security Belt’ for the Arabian Gulf waters. This exercise had similar stated aim of ensuring safe and secure movement of international shipping operating in the Gulf waters as that of the Sea Guardian 2020. Also, it conducts joint exercises with Chinese and Russian navies in the Arabian Sea as part of the Aman series which makes it a natural partner.

Pakistan Navy is a potent regional naval power with significant conventional capability and evolving naval nuclear plans. In particular, it possesses enormous operational knowledge of northern Indian Ocean (Arabian Sea, Persian Gulf, Gulf of Aden, Red Sea and the Suez Canal).  It can be a significant contributor to ‘Marine Security Belt’ exercise but may have chosen to shy away primarily due to pressures from the US.

Third is about Gwadar Patrols. In 2017, it was announced that Pakistan Navy had constituted Task Force 88 comprising of frigates, fast attack craft, aircraft, and drones supported by a complex electronic surveillance network for the ‘seaward security of Gwadar port and the protection of connecting channels’. According to media reports, during a briefing for visiting journalists at Ormara, a senior official of Pakistan Navy ‘informed that the Navy had beefed up security at the Gwadar seaport and surrounding areas by instituting a patrolling system in light of increasing commercial and development activities under the China Pakistan Economic Corridor CPEC. The surveillance of the coastal belt leading to the Gwadar port is being carried out on a 24-hour basis’.

Consequently, in 2019, the first ever consignment of cargo containers from Kashgar to Gwadar were loaded onboard MV Cosco Willington and MV Al-Hussein and the two vessels were escorted to international waters by the Pakistan Navy ships and aircraft exhibiting that Gwadar Port is safe and secure for transit.

Although Senior Captain Zhou Han Wen of the PLA Navy did not make any reference to the CPEC or the Gwadar Port during the briefing of Sea Guardian 2020, there has been growing pressure on the Pakistani side over the security of Chinese personnel (nearly 9000 engineers, technicians and specialists) as also the infrastructure under construction by Chinese companies. Pakistan has earmarked a ‘Special Security Division (SSD) comprising 9,000 Pakistan Army soldiers and 6,000 para-military forces personnel’ for the security of the CPEC project and Chinese nationals working on it. Pakistan has dismissed speculations that there are Chinese military personnel in Pakistan for CPEC projects.

Fourth, is about Pakistan’s ambition to set up an independent Regional Maritime Security Patrol (RMSP) covering a very large area encompassing the Gulf of Aden, Gulf of Oman, Strait of Hormuz and as far south as Maldivian waters. According to a Pakistani analyst the primary purpose of the RMSP is to “maintain a threat-free environment in Pakistan’s immediate and distant maritime neighbourhood, so that economic, scientific and social activities at sea continue unhindered’ Further, ‘Pakistan Navy would expand the RMSP’s partner and footprint fabrics by including regional littoral states who support its vision. Furthermore, “RMSP has been set in the direction of ‘fostering intra-regional bonds through maritime multilateralism’, a thesis that has steadily been gaining acceptance among Pakistan’s maritime strategic community”.

It is further argued that the RMSP is for ‘fighting and suppressing maritime terrorism, piracy, drug trafficking, human smuggling and gun running are major objectives of RMSP besides contributing towards disaster relief and environment protection’ and is in resonance with the 1982 UN Conventions on Law of the Sea (UNCLOS) and various UN Security Council (UNSC) resolutions.  It would help ‘achieve and sustain good maritime order’ in the Arabian Sea and broader India Ocean.

In 2018, the Pakistan Navy commenced RMSP and its warships made voyages in North West Indian Ocean (Gulf of Oman and Gulf of Aden) and South Arabian Sea and called at ports in Saudi Arabia and Oman. The Pakistan Navy maintains at least two warships ‘on a continuous 24/7 patrols in various parts of the Indian Ocean’.

Pakistan Navy has rich experience of operating as part of Combined Task Force (CTF) such as the ‘Coalition Maritime Campaign Plan (CMCP)’ under Combined Task Force (CTF)-150 for counter terrorism, and its senior officials have led as Commander of Combined Maritime Forces (CMF) based at Bahrain. It also supported mission-oriented task forces such as CTF-151 (counter piracy), CTF-152 (Persian Gulf security), etc. Many of its front-line warships and aircraft were deployed in support of the above Task Forces and senior Pakistan Navy officers had commanded the CTF-150 & 151 for ten and eight times since 2004 and 2009, respectively.

It has been stated that the RMSP ‘draws its strength from the theme of ‘strategic autonomy’, i.e., without having to rely on an external power for setting maritime security priorities and objectives’. It may be recalled that Pakistan, withdrew from the CTF 152 due to operational, administrative and political tensions with the administration of US President Donald Trump.

Finally, Pakistan Navy’s RMSP is ‘work in progress’ and may gain acceptance among many other nations particularly China which would be more than willing to join many such coalitions and establishes a foothold in the Arabian Sea similar to the one in Djibouti.  Other candidates could be Iran, Malaysia, Turkey and Saudi Arabia. This should worry India which has preferred to stay away from any US or French led coalition or Task Force that have been operating in the Arabian Sea.