Sub Title : How far have we come as a nation in becoming self-reliant in defence 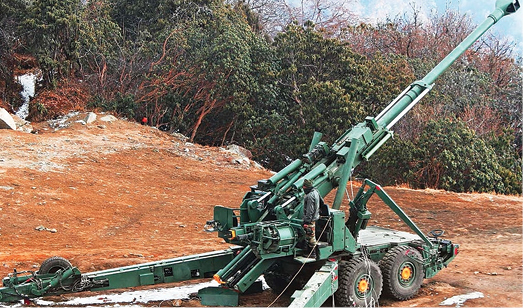 The Government has shown its intent by ushering in much needed defence reforms. It is now time for the stakeholders to show sincerity of purpose and start functioning with  a collaborative mindset rather than in silos, so that the Clarion Call  for Atmanirbhar Bharat in Defence becomes a reality. Time is indeed ripe now to get out of being a Slave to the Processes and make things happen and usher in a decade where the tide will turn!

The Indian Armed Forces inherited a legacy from the British at the time of independence in 1947. British military officers continued to remain in command to reorganise and rebuild the armed forces from the fragments in the aftermath of WWII and the split between India and Pakistan. In a number of instances the partition was skewed; for example a large number of gunners and gunnery ratings in the Navy switched over to Pakistan Navy just as most of the signallers coming from South India joined the Indian Navy, thus leaving huge operational voids. Military hardware was primarily of British origin and continued to be so till 1965 when Indian military decided to seek alternatives from the Soviet  Union who readily provided us with all types of platforms and munitions for the next three decades. Sanctions imposed by the West after the nuclear tests in the late nineties opened a window for Israeli and French technology to make its way in, even as Russia and East Europe continued to dominate. It was after the Kargil conflict in 1999, that the Indian establishment felt the inadequacies in military readiness and the consequent risks to national security of being dependent on foreign aid and purchases for military readiness. Need for ushering in urgent Military reforms was well appreciated and that included creating indigenous capabilities and capacities. That led to redefining and reforming the acquisition process, opening up procurement of military hardware on the basis of qualitative requirements and cost effectiveness. This gradually led to indigenisation and encouragement to Indian Private Sector to participate in defence manufacturing. Today self-reliance in defence manufacture has become the guiding principle in India. Ever since the slogan – Atamanirbhar Bharat (Self-reliant India) was given by the Prime Minister of India, unprecedented momentum has been gathered by Make in India and Made in India processes, making import of military hardware an exception rather than the rule, as it obtained merely a decade ago.

In brief, during the last one decade alone, the journey started with ‘Dependent on foreign support’ to ‘Self-reliant’ to ‘Coproduction’ to ‘Private sector participation’ to ‘Make in India’ and finally to ‘Atmanirbhar Bharat’.

To trace the journey since independence, in 1948, India inherited 18 Ordnance Factories (which had their own R&D facilities) and in 1954, the Hindustan Aircraft Factory was set up at Bangalore with French assistance. An independent Defence Research & Development Organisation (DRDO) was formed in 1958. The Indian government also acquired two shipyards – Mazgaon Docks Ltd and Garden Reach Shipyard.

Defence R&D budget rose from a 1% share in Defence Expenditure in the 1960s (with a Defence budget of $0.68 B) to 5% in 1994 and peaked to 7% in 2001 and has never dipped below that (even with the defence budget of $65.86 B). The private industry is yet to reap the benefits of the R&D investments of the Government of India in spite of a significant portion of the defence budget being apportioned for defence R&D. The budget is meant only for the public sector so far. Allocations have been made this fiscal to utilise 25% of the budget for R&D by the private sector. Several other initiatives like the Idex challenge and Start-Up India have resulted in encouraging innovations by a number of entrepreneurs.

‘Make in India’ initiative was launched on 25 September 2014 with three major objectives:-

The policy approach was to create a conducive environment for investment, develop modern and efficient infrastructure, and open up new sectors for foreign capital. The initiative targeted 25 economic sectors for job creation and skill enhancement and aimed ‘to transform India into a Global Design and Manufacturing Hub’.

On 9 August 2020, Ministry of Defence followed up PM Narendra Modi’s call to the Nation, for AtmaNirbhar Bharat by promulgating a list of 101 items for which there would be an embargo on import beyond the timelines indicated.

Import Embargo. Amongst the major stakeholders, the armed forces and the industry, there are two common concerns on the ‘import embargo’ list:

The Import Embargo concerns come against a backdrop of heightened security challenges due to the tense situation along India’s border with China, and the competing demands on the budget, already strained by the Covid pandemic.

In his inaugural speech at the Defexpo-2020, PM Modi had announced the formulation of LTIPP for 15 years by the Chief of Defence Staff.  The ‘import embargo’ list must be seen in conjunction with specific capability requirements defined in the LTIPP.

ICADS. Gen Rawat, India’s first CDS had initiated a new process- Integrated Capability Development  Plan (ICADS) to replace the LTIPP.  ICADS/LTIPP  must factor budget imperatives and have concurrence of the Finance Ministry. Currently the LTIPP based on an assumed year on year increase of budget, is unrealistic and has all along been a fundamental flaw in the planning process. For the industry to be able to invest securely,  the ICADS must act like a ‘Defence Industrial Planning’ document, that comes with a degree of assurance, that items required will be procured within the given timeframe.

To minimise uncertainty in defence capability development, in 2019, the central government had added a new term of reference for the Fifteenth Finance Commission – to examine the possibility of setting up permanent non lapsable funding for India’s defence needs. According to media reports, several states have raised concerns with the 15th Finance Commission, over the Central Government’s proposal to create a non-lapsable defence fund out of the divisible pool of central taxes, pointing out that funds for defence should be allocated from the Consolidated Fund of India, as defence is the Centre’s responsibility under the Constitution.

The Defence Planning Committee, chaired by the National Security Advisor, with the Chief of Defence Staff, three service chiefs, defence, foreign and expenditure secretaries as its members, is the right forum for ensuring seamless integration between national security strategy, capability development and budgetary support.

Developing all round Defence Eco-system

The recent thrust towards developing an all-round Defence R&D Eco system breaking the monopoly of the Government and projected as a pathbreaking initiative is more in articulation since there are existing provisions to do so. However, perhaps to give the same a fillip the earmarking of an amount 25% of Defence R&D budget is significant. Make 1 which is an existing frontrunner provision to involve private industry does not come up for any flaunting. Rightly therefore avenues, structure and mechanisms to implement this was another theme. If it is fundamental technology research with an end product as a goal, then a clear acceptance of the user has to come out but given extended R&D timelines and grey areas how will the user commit something is an issue which comes up in Design & Development cases even today? The translation of applied research to prototypes and mass production is a long journey with uncertainties. This being a grey zone issue like the funding cover, risk mitigation strategies need to be evolved.

However, what clearly stands out is that DRDO has to play a defining role in this implementation given the robust existing infrastructure including nurturing of Centres of Excellence in various academic institutes in various IITs/NIITs and funding of multiple projects. The DRDO initiative of nominating Development cum Production Partners (DcPP) or Production Agencies (PA) upfront at the beginning of a project is already implemented  with the private industries. This model has to be refined now for a collaborative approach with higher stakes for the private industry. However, any industry capable and proposing to undertake this R&D on their own should most definitely be promoted and funded. Clearly avenues for more Make 1, iDEX, TDF schemes and so on need to defined and incentivised.

There are reasons to be optimistic as the Hon’ble Raksha Mantri announced four clear initiatives which will steer this ahead. Five projects in Make 1 in the FY 2022-23, a robust monitoring mechanism to oversee the effective utilisation of budget earmarked for domestic industry, reforms in QA processes and expanding the iDEX scope to support proposals requiring investment of almost 10 Cr up from existing 1.5 Cr will definitely set the ball rolling. A clarity on visibility in future projects will further reassure the industry besides supporting framework for testing and certification infrastructure. The stakeholders on their part now need to take early advantage be it setting up of SPVs, investments in infrastructure, boosting of skill sets, setting up joint ventures back end for major components and critical assemblies/sub-assemblies. Time is ripe now to get out of being a slave to the processes and make things happen and usher in a decade where the tide will turn!