String of Pearls Asset or Liability

Sub Title : Why the string of pearl bases, rather than conferring any benefit to China could become liabilities 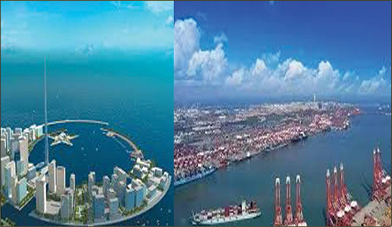 The Chinese ‘String of Pearls’ along India’s east and west seaboards are now a reality. Lt Gen V Saighal examines why the string of pearl bases, rather than conferring any meaningful benefit to China could become liabilities

It was over a decade ago that defence analysts began drawing attention to the naval bases being set up or being attempted to be set up by China in the Indian Ocean in general and around India in particular. The earliest news items referred to listening posts being set up by China in Myanmar islands to monitor the Andaman and Nicobar Islands. There followed talk of bases being established on the Myanmar coast in the Bay of Bengal with hints of a base being negotiated with Bangladesh in Cox’s Bazaar. Alarm bells actually starting ringing with construction activities in Hambantota in Sri Lanka and Gwadar on the Makran Coast in Pakistan.

The Chinese have since extended their reach to a base in the Red Sea. Djibouti, an arid Horn of Africa nation with less than 1 million inhabitants, also has become a military outpost for China, France, Italy and Japan, with that nation’s first overseas base since World War II. Other powers including Saudi Arabia have expressed interest in the key location across the Bab el-Mandeb strait from the Arabian Peninsula and on one of the world’s busiest shipping corridors.

Construction and related activities in Hambantota have been covered extensively in India and in the press of several countries around the world especially those with maritime or geopolitical interests in the Asia-Pacific, which is now being increasingly referred to by the Western powers and their allies as Indo-Pacific. It followed their concerns over the increasing Chinese militarization of some of the islands and rocks in the South China Sea as well their attempts to show the flag in the Indian Ocean. The fast pace of Chinese naval expansion is an additional factor. In the maritime domain it is the most important development since the end of the Cold War.

The String of Pearls hypothesis got a fillip after China and Myanmar signed an agreement to build the deep-sea port project in Kyaukpyu after negotiations had dragged on for years over financing and related issues. A joint venture will be set up to build and operate the port. Once completed, the port will reportedly have a gross output of $ 3.2 Billion. According to several analysts the string of pearls can be deemed to be complete around India, straddling it so to say from the Bay of Bengal to Sri Lanka in the South and the Arabian Sea in the West. Myanmar and Sri Lanka have assured India that these bases are for commercial purposes only. However, the visit of a Chinese submarine to Hambantota led India to protest. Gwadar falls into an altogether different category. Its importance to China and Pakistan cannot be overstated, nor can it be taken in isolation from the China-Pakistan Economic Corridor (CPEC). The fluid situation in Maldives needs to be watched as indications are that the change in government is likely to be a setback to China. The earlier government had displayed marked hostility towards India.

Naturally India will be concerned with Chinese activities in its neighborhood that the former considers inimical to its interests, i.e., those that pose an immediate threat or could build up to a definite threat leading to engagement in the marine domain. A full-scale outbreak starting from the Sino-Indian border to the Indian Ocean is an altogether different situation that would go beyond limited hostilities. It would be war where the entire region would face perturbations if not more serious involvement beyond the two antagonists. This paper limits itself to the viability of Chinese bases from Bay of Bengal to the Arabian Sea were hostilities around them to take place.

The assertion being hinted at is that the string of pearl bases rather than conferring any meaningful benefit to China could become liabilities. In the East and South, Myanmar and Sri Lanka while taking advantage of Chinese investments would not be party to China using their territory against India. It can practically be ruled out. Further the Chinese would know that India would be well positioned to take out these bases without causing any major collateral damage to host countries. All of them would be within range of shore-based Indian aircraft. Reinforcing these by the Chinese Navy would be an impractical proposition seeing the distance to them. Reinforcements even were they to be considered would have to pass through the Malacca Straits or the Straits further to the South, a longer route. It would not be too difficult for India to contest passage in the Malacca Straits. ASEAN countries through which reinforcements would pass are well–disposed towards India.

There appears to be unbelievable convergence or uniformity of views regarding an enhanced Indian presence in the region. Excluding China there are around fifteen countries in South and East Asia, including Australia, Taiwan, and North Korea. Although technically Australia and New Zealand do not form part of South East or East Asia; their economic and physical presence allows their integration in the region. If one were to take free soundings from the public in every country mentioned, it will be seen that none of them would be averse to an Indian presence in the region; not one, not even the few countries that are considered close to China or under China’s tutelage. Going a step further, not one government from these countries would be uncomfortable with an Indian presence if left to itself, or if it were not obliged to look over its shoulder for China’s lack of approbation. Coming to think of it, this could indeed be one of the most remarkable achievements of the soft power of any country in the world as far the region under discussion is concerned.

Gwadar in the West is an altogether different proposition. As opposed to Myanmar and Sri Lanka Pakistan is a full-fledged ally of China. It is debatable whether India would have the capability or even the desire to blockade the Gwadar base. As per the author it would not have to do so. The Chinese at this stage of its development would not want to use it against India in a maritime confrontation. It would be counterproductive regardless of the outcome. Gwadar is being set up as the terminus of the prestigious CPEC corridor. By current estimates the Chinese plan to set up a gated Chinese colony for about 500,000 in Gwadar. The corridor, inter alia, is being established to limit China’s dependence on oil flow through the Malacca Straits, the same as the Myanmar port in the Bay of Bengal. Of the two, Gwadar is the more viable. Gwadar is not only a geostrategic concern for India; its progress would be monitored as closely by the US, British and French maritime interests in the Indian Ocean. The US base in Diego Garcia and the French, British and US bases in the Gulf would play their part in any confrontation.