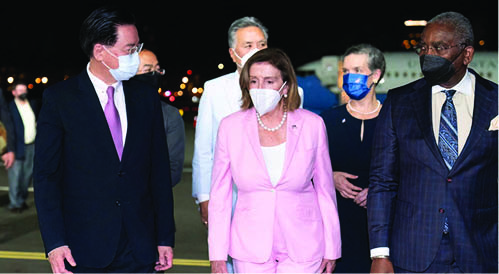 Nancy Pelosi’s visit to Taiwan is just another move on the Global Chess Board to show supremacy. US has tried to allay China’s apprehensions that such visits give credence to Taiwan’s claims of sovereignty by stating that there is no change to its One China policy. But the Dragon is clearly not impressed

The Pelosi landing did finally happen. Nancy Pelosi, the Speaker of the House of Representatives, third in the American hierarchy, reached Taipei on the evening of 02 Aug 2022. This amidst weeks of speculation whether she would or would not go ahead with the visit due China protesting against the planned visit and warning of serious consequences. The Speaker who flew in an US Military aircraft is the highest ranked elected US politician to visit Taiwan in 25 years. Four US warships including the carrier USS Ronald Reagan were positioned in waters east of Taiwan and 21 Chinese military planes entered Taiwan’s air defence zone on the day of Pelosi’s arrival in Taiwan. An apparent show of resolve by both sides.

China follows the One China principle, which is that there is only one China including Taiwan and that Taiwan would be reunited with mainland China one day. The policy dates back to 1949 when the Chinese civil war ended and the vanquished Nationalists fled to Taiwan. Since then, China’s ruling Communist Party has had a confrontational stance towards Taiwan, which has become more belligerent during Xi’s regime. In the beginning many governments including US recognised Taiwan but as China’s stature grew many countries including  US cut off ties with Taipei in favour of Beijing in the early 1970s. Currently Taiwan is fully recognised by only 13 small countries/ Vatican City. However, Taiwan has a place on the global stage and some 59 countries including most important ones have  established unofficial diplomatic relations with it.

Though the US does not endorse the One China principle it follows the One China Policy, whereby it  acknowledges there being only one Chinese government. Under the policy, the US has formal ties with China only. It is essentially an US diplomatic balancing act.

Why is China angry about the visit? China feels that visits by foreign government officials lend credence to Taiwan’s claims of sovereignty. Besides Pelosi has been a strident critic of China for the past three decades especially in the sphere of human rights violations. Pelosi describes her visit as part of a US obligation to stand with democracies against autocratic countries, and with democratic Taiwan against China. The Xi regime also feels that such visits are unnecessary interference in the region where it is increasingly trying to flex its muscle.

Though the US has ‘militarily supported’ the visit it has also tried to assuage China’s apprehensions by stating that it has no intention of changing its One China policy. And perhaps to reinforce this stance US President Joe Biden has asserted that Congress is a co-equal branch of the government, which means the executive has little control over congressional travel i.e. he in no way could have prevented the visit from taking place. But China is certainly not impressed.

Just prior to the visit China is said to have  levied new import bans on more than 100 Taiwanese products, an attempt to intimidate Taipei and the Chinese military also flexed its muscle by holding live-fire exercises  three days before the visit, very near Taiwan. After Pelosi’s arrival in Taipei they have declared that more such exercises will be held during the coming weekend. ( She would have left by then).  It is unlikely that China will do anything serious- only some sabre rattling on the global chess board.