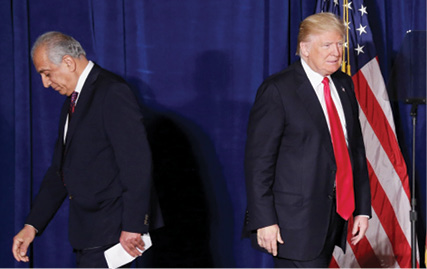 The calling off of the negotiations with the Taliban by President Trump augurs well for India. The deal, had it come through, would have given a face saver to the Americans to withdraw troops from the country. However, it would have  given no guarantee of peace  and created situations favourable to the Taliban for creating further turmoil in the country and helping Pakistan in fomenting  trouble on its eastern border

For over a year now US officials led by the suave Afghan American Zalmay Khalilzad have engaged in talks with the Taliban at their Headquarters in Doha, Qatar. Nine rounds of talks, ostensibly aimed at bringing  peace to Afghanistan, have been held. However, in actuality  the result that the Americans hoped for, would have provided the US with a face-saver for an exit from its longest and most expensive war, which has already claimed 3476 lives and cost over $3 Trillion. The deal, which was almost done, was creating a sense of disquiet in many. It provided no ceasefire; it excluded the Afghan government and provided no guarantees from the Taliban. In short, it would have only paved the way for a US withdrawal but  also resulted in  the country being handed over on a platter to the Taliban and in effect conceding defeat to them.

Even as the final draft was inked and agreed upon ‘in principle’, the Taliban overstretched. In an attempt to improve their bargaining position they launched a series of attacks. On 02 Sep, a blast killed 16 people and injured over a 100. Three days later another bomb ripped through the posh diplomatic enclave in Kabul killing 12, including a US soldier. That seemed to be the last straw. Through a series of tweets, President Trump put a lid on the ‘Afghan Deal’, which in any case would have been disastrous for the country and the region.

Trump also announced that the Taliban leaders had been invited to Camp David for talks and in fact, were on their way there, when the talks were cancelled. These talks were scheduled at the same place where the decision for US intervention in Afghanistan was taken and ironically would have happened around the 18th anniversary of the horrific 9/11 attacks, which triggered off the entire sequence of events.

The US agreed to withdraw 5400 troops from five bases within 135 days of signing the agreement and then withdraw the remaining 14,000 over a period of 14 months. In return, the Taliban would not ‘allow the enemies of the US’ – namely the Daesh/ IS and Al Qaeda to establish themselves in Afghanistan and would not attack US forces during the withdrawal.

The Taliban were not agreed to a ceasefire but only to a ‘reduction of violence in selected areas’, namely in the Parwan Province where the US Bagram Air Base is located, and in Kabul. The deal would not have brought peace in its wake.

The deal excluded the Afghan government, as part of the pre-conditions laid down by the Taliban for the talks. By sidelining the democratically elected government the US had ipso facto agreed to the centrality of the Taliban in Afghanistan. The only concession which the Taliban provided was in agreeing to talk to the ‘illegitimate and puppet government’ after the US-Taliban deal was signed – at a time when their bargaining position would be much stronger and they would be able to call the shots.

Although the deal is not dead, it seems unlikely that it will be revived – at least not in the present form. There was considerable trepidation in most quarters of the US administration that it amounted to surrender and that too without any guarantees. The cancellation of US-Taliban talks has been met with relief in Afghanistan, India and most countries –except Pakistan. Yet, as the US looks for a withdrawal from Afghanistan, and the Afghan government struggles to keep the resurgent Taliban at bay there will be changes in the dynamics of Afghanistan. And these changes could have a huge impact on India and the region.

The calling off of talks means that the US withdrawal schedule (which had been nicely choreographed to coincide with Trump’s re-election campaign) may be delayed. but will definitely occur at some point in the future. That is a scenario which has to be catered for. Because with it, will come the almost inevitable Taliban onslaught on the country as it did during the vacuum of the Soviet withdrawal in the late 1980s. The only way of providing some kind of stability to the country is by having a strong government in place and then engaging in ‘Intra-Afghan’ talks with the Taliban and work out some form of power-sharing arrangement to bring peace to Afghanistan.

Presidential elections in Afghanistan are scheduled on 28 September. President Ghani – who is a front runner for re-election – is keen that the elections are conducted so as to add legitimacy to his government. The Taliban have gone all-out to disrupt the elections by targeting rallies and attacking candidates and will not permit elections to take place in the areas controlled by them. They hold more area now than at any time after 2001 and have complete control of over 24% of the country. Should they succeed in disrupting elections Afghanistan’s fledgling steps towards democracy, which were perhaps the only gains of the war, would halt. Worse, the writ of the government will be seen to have evaporated and will leave the road clear for the Taliban.

The elections are in a limbo, but in all probability will take place – in spite of large scale violence. The US presence – at least for the time being – will definitely help. Perhaps after a newly elected government is in place, ‘Intra-Afghan’ peace talks can be initiated with the Taliban to discuss a ceasefire and some kind of a power-sharing arrangement with them.

The incorporation of the Taliban in the government seems to be the only way in which some form of peace can return to Afghanistan. The question however is that will the Taliban even engage in talks with the Afghan government – something they have refused all these years. With the breakdown of US-Taliban talks their position will only harden. They would intensify attacks, they would engineer large scale defections from the Afghan Security forces, they will gain control over even greater parts of the country and creep up to Kabul. Their long term aim of establishing an ‘Islamic Emirate of Afghanistan’ (a name they insisted that Afghanistan be referred to in the draft of the US-Taliban Deal) will remain unchanged. And the only way to stave it off is to ensure that a strong Afghan government whose hands are strengthened by the international community, is in place.

Implications for the Region

The stalling of the US –Taliban deal is definitely good for India and the region – less Pakistan. Pakistan used its position to leverage the deal to mend bridges with the US by facilitating talks with the Taliban. The success of the talks would have paved the way for them to have a pliant Taliban leadership, in place, in Kabul and thus gain ‘strategic depth’ in Afghanistan.

India too has much at stake. The apprehension of the US- Taliban deal and the possibility of the Taliban resurgence in Afghanistan, raised the spectre of the late 1980s, when the Soviets withdrew, and Afghan fighters came to Kashmir to start the first phase of violence. The fear of increase in  regional instability has been one of the factors that have prompted the decision to abrogate Article 370 in Kashmir. We have some breathing space but have to prepare for the  growing strength of Taliban in Afghanistan and the possibility of funneling of Afghan fighters through Pakistan into Kashmir.

India has large interests in  Afghanistan. We have provided over $ 3 Billion in aid since 2001, and have over $800 million of investments there. The Chabahar port in Iran too would be largely defunct if land access is not provided from Afghanistan. It forms the  link to Central Asia and is vital to our strategic interests. Our Afghanistan policy thus has to be reviewed very carefully to ensure that our interests are safeguarded. There is no doubt that we should continue with our policy of supporting the legitimately elected government and strengthen their hands. Trump had hinted that India provide troops to Afghanistan to help protect its interests there – but that would suck us into a vortex and should not be considered. India has great goodwill with both the Afghan Government and its people, which should be capitalised. Other nations like Russia, Iran and China also have interest in the stability of Afghanistan. Perhaps we can form some kind of regional security apparatus with them to ensure stability in Afghanistan.

The cancellation of the US-Taliban deal though a good omen is at best a respite. The US will withdraw at some stage and that is a scenario both Afghanistan and the region must be prepared for. A resurgent Taliban will only intensify its actions and seek to take over the country – with or without the deal. The direction in which the country tilts and the course it follows thereafter could shape the dynamics of the entire region.