The Air War of 1971 Indo-Pak Conflict

Sub Title : The IAF played a stellar role during the operations 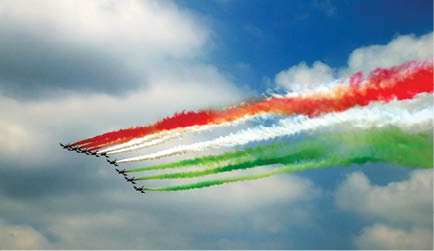 The 1971 Indo – Pak war showcased the synergy between the three services, with each making a significant contribution to the overall effort. The Indian Air Force greatly helped the ground operations in East Pakistan by achieving air superiority as also facilitating  important ground operations by the Army. The IAF played a stellar role in the west too

The nation of Bangladesh was born in Dec, 1971 following a brief war between India and Pakistan. Right from the start, the indefensibility of East Pakistan was quite apparent stemming as much from its geographical construct as from the cultural nationalism obtaining there. India was physically wedged between the two halves of Pakistan while differences in their eastern & western populations in terms of language, social structures, values and institutions set them on divergent trajectories. The use of brutal suppressive force from West Pakistan to quell the call for self-determination in Mar, 1971 merely accentuated the crisis with a massive influx of refugees – ten million by some estimates – into India. India highlighted the problem at various international fora but to no avail, eventually leading to the Indo-Pak war of 1971 in which the Indian Air Force played a major role.

The first air battle, even before the start of formal war, was the Battle of Boyra on 22 Nov1971. Three PAF F-86 Sabre jets were providing close air support to the Pakistan Army ground units close to the border area in Garibpur when they ended up crossing in to the Indian airspace. They were intercepted by IAF Gnats scrambled from Dum Dum airport. Two Sabres were shot down. Both pilots ejected and were taken PoW. One of the downed pilots, Flight Lieutenant Parvaiz Mehdi Qureshi, later rose to become the Chief of the Pakistan Air Force.  The third Sabre was badly damaged but its pilot managed to fly it back to Tejgaon airfield outside Dhaka. First blood had been drawn!

It was clear to Islamabad by this time that a full-scale war was inevitable, and that East Pakistan could not be defended in the long run. Gen Yahya Khan and his military advisors surmised that an open conflict with India would not last long due to international pressure. They decided therefore, to focus on the western borders of India, with a plan to  occupy as large an area of Indian territory as possible as a bargaining tool at the negotiating table. PAF was expected to give maximum support to this offensive by providing at least a temporary state of air dominance under which Pak army could conduct a lightning campaign deep into western India.

The war began with Operation ChengizKhan,  withpreemptive strikes carried out by the Pakistani Air Force (PAF) on the forward airbases and radar installations of the IAF on the evening of 3 Dec 1971.  In doing so, the  PAF wanted to emulate the Israeli strategy of air dominance against Egyptian and Arab air forces in Operation Focus during the Six-Day War of 1967.

The targets were Indian Airbases of Amritsar, Ambala, Agra, Awantipur, Bikaner, Halwara, Jodhpur, Jaisalmer, Pathankot, Bhuj, Srinagar and Uttarlai ,and air defence radars at Amritsar and Faridkot, in two waves. As per Pak plans, within forty-five minutes of these strikes, Pakistani troops had shelled India’s western frontier and were reported to have crossed the border at Punch in the state of Jammu.

The third wave of the PAF counter air strikes were directed to strike Ambala, Agra and Halwara and continued in single or two-plane formations through the evening until at least 2230 hrs. These strikes involved fifteen B-57 Canberras, four T-33s, and one C-130. The B-57s  flew seven single-plane sorties. These caused some damage, especially in Uttarlai and Halwara. Largely however, the Pakistani air strikes were ineffectual and failed to inflict any material damage to the IAF air fields, only cratering the runway at Ambala and destroying a radar station.

As Indian Prime Minister Indira Gandhi addressed the nation on radio shortly after midnight informing about the Pakistani attack, the Indian Air Force struck back. By 2100 hrs on 03 Dec, the Canberra bombers were armed and ready for initial retaliatory strikes. Pakistani airbases at Murid. Mianwali, Sargodha, Chandhar,  Risalewala, Rafiqui and Masroor were struck. In total, 23 combat sorties were launched that night, inflicting heavy damage to Sargodha and Masroor airbases. The  PAF units stationed on these airfields had to operate from taxiways for the following two days. At the same time, the IAF deployed additional aircraft to its forward airfields for the strikes that were to follow the next morning.

In the initial stages, however, the air campaign in the Western sector was limited to striking forward bases of the PAF and providing close air support to the land forces. Within days, India was able to achieve air superiority. Counter air, interdiction missions and attacks against strategic targets continued to be flown throughout the 14-day conflict.

One of the most successful air raids into West Pakistan was on Dec 8, 1971, in which Hunter aircraft, based at Pathankot, launched a strike on Pakistani air base Murid and destroyed five PAF Sabre jets on the ground. Another significant air operation in the Western sector was the Battle of Longewala. In this operation, a major armoured thrust with 65 battle tanks by the Pakistan Army on Dec 5 was blunted by six Hunter aircraft operating out of Jaisalmer; they destroyed or damaged 52 Pakistani tanks. This was a stark example of how air power alone can disrupt and destroy major army offensives, given a favourable air situation.

In East Pakistan, IAF began its air offensive with Hunters and  Canberras striking Tejgaon airbase repeatedly on 03 Dec night/ in the early hours of 4 Dec. The PAF 14 Sqn operated only Sabres, which lacked night fighting capability, so the bombers were opposed only by the guns of the Pakistani light ack-ack regiment. Hunters attacked Chittagong in the morning and Narayngunj  fuel depots in the afternoon. PAF Sabres flew Combat Air Patrols resulting in several dogfights. PAF flew thirty two operational sorties against IAF incursions on 4 Dec, but reportedly took measures to conserve ammunition in anticipation of a long war. IAF meanwhile  expanded operations to attack Chattagong, Jessore and Ishwardi airfields  and several other targets, including Teesta Bridge, Chandpur and Goalanda Ferry Ghats and flew several ground support missions. The PAF was not able to intercept any IAF missions outside Dhaka.

IAF’s main focus in the Eastern sector was to achieve air superiority quickly so that Indian Army units could advance towards their objectives with speed. Towards this end, almost a dozen fighter Sqns were apportioned for air battle in the east. Adequate helicopter and transport aircraft had also been made available, anticipating the needs of the Army for heliborne and airdrop operations. PAF, on the other hand, had one Sqn of F-86 Sabre jets (No 14. Sqn), three T-33 trainers and two Alouette III helicopters, while “Log Flight” of Army Aviation Sqn contained two Mi-8 and two Alouette III helicopters. PAF operational effectiveness had also suffered because most Bengali pilots and technicians (almost 50% of the 1222 PAF personnel in East Pakistan) had been grounded during the political unrest of Mar 1971.

Bengali PAF personnel who had defected (nine pilots including six civilian pilots and fifty technicians) were trained as part of Kilo Flight. One each DC-3 Dakota, DHC-3 Otter and  Aloutte III helicopter were appropriated for this nascent Bangladesh Air Force. Later, Kilo flight was to take advantage of the lack of night-fighting capability of the PAF to launch hit-and-run attacks on sensitive targets inside Bangladesh.

Until 05 Dec evening, Tejgaon airbase was still operational, the ack-ack regiment there had managed to successfully defend the airbase. IAF switched tactics and on 06 Dec four MiG-21s flying, bombed Tejgaon airstrip with 500 kg. bombs, scoring several hits on the runway rendering it unusable. With Tejgaon runway unavailable the PAF Sabres were grounded. And although the runway was repaired by the morning of 07 Dec, it was cratered again during an attack by a lone MiG-21. The IAF attacked Tejgaon repeatedly for the duration of the war to prevent any repairs to the runway. However, PAF and Army aviation helicopters continued flying daily night missions to Pakistan army positions at Bogra, Comilla, Maulivabazar, Khulna and other bases carrying reinforcements, supplies, munitions and evacuating the wounded.

The IAF continued to bomb other airfields, including the abandoned World War II airfields of Comilla, Lal Munir Hat, and Shamsher Nagar throughout the war, denying their use to PAF aircrafts that may be moved by road, as well as to any external aerial reinforcement. Ferries across major river crossings were sunk by the IAF, thus denying the Pakistani army its line of retreat to Dhaka.

INS Vikrant the Navy’s sole aircraft carrier, also sent Sea Hawks to bomb the Chittagong harbour and airport throughout the war, while it also sent bombing missions to Cox’s Bazar, Barisal, Khulna and Mongla ports, and to Chandpur and other Pakistani positions between 7-14 Dec.

IAF focus shifted on supporting the MitroBahini advance following the grounding of PAF on 7 Dec. It now began attacking targets inside Pakistani territory flying interdiction and close air support missions for the remainder of the war. Canberras repeatedly struck Jessore, forcing the enemy to abandon this strategic city. On 10 December, IAF heli-lifted troops of the IV Corps from Ashuganj to Raipura and Narsingi in what came to be termed Operation Cactus-Lilly, also known as the Helibridge over Meghna. Four infantry battalions and several light PT-76 tanks crossed the river  Meghna, (Pakistan Army had blown up the Bhairab Bridge), allowing the Indian Army to continue their advance in the face of stiff resistance.

Among other notable operations, a Su-7 dropped Napalm on Bhairab twice on 10 & 11 Dec, three converted An-12s of 44 Sqn struck the Jaydebpur Ordnance factory in East Pakistan on 13 Dec and the Caribous carried out regular night raids on Tejgaon.

The  Tangail Airdrop on 11 December involved several  An-12s, C-119s, 2 Caribous and Dakotas from various squadrons airdropping 700 troops of the 2nd para battalion near Tangail, about 15 km north of Dhaka. Gnats of 22 Sqn provided cover for the operation. Several dummy airdrop operations were staged simultaneously to confuse the enemy. It was a daring paradrop operation, the objective being to capture the Poongli Bridge on the Jamuna river to cut off the retreating 93 Brigade of the Pakistan Army that was moving back from Mymensingh to reinforce the defences of Dhaka. The Paratroopers linked up with various Mukti Bahini and Indian Army formations from 101 Communication Zone advancing from the North, and then pushed south towards Dhaka, while the IV Corps formations that had crossed over the Meghna, converged on Dhaka from the North and East.

On the morning of 14 Dec, following an intercept of  a high-level meeting of the civilian administration in East Pakistan,  four  MiG 21s  attacked the Governors House with rockets, effectively destroying the building. The Governor of East Pakistan, Mr A H Malik, resigned on the spot plunging the administration into total chaos. This was perhaps the final nail in the coffin of erstwhile East Pakistan. India took 93,000 PoWs as war ended on 16 Dec 1971.  Bangladesh was born!

IAF records state that it flew 1,978 sorties in the East and about 4,000 in the Western sector against the PAF that flew 30 sorties in the East and 2,840 in the West. Apart from counter air missions, more than 80 per cent of sorties flown by IAF aircraft were for battlefield air support and interdiction missions. The IAF reportedly lost 45 aircraft as against the PAF’s loss of 75. IAF definitely enjoyed a distinct edge against the PAF both numerically and technologically. PAF preemptive strikes, though audacious, failed to achieve their objective against a well-prepared IAF, which countered quickly and dominated the skies on both the Western and Eastern fronts early on in the conflict.

Indian military victory in the Indo-Pak war of 1971 was decisive and emphatic. It is also a fine example of well-coordinated and synergised operations by the armed forces. The Indian Air Force played its part in the conflict and made a stellar contribution.