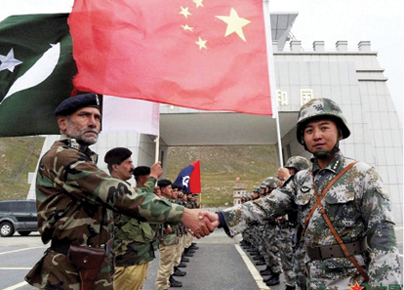 Chinese hegemonistic intentions in South Asia are obvious. They have met with great success in Pakistan and  have successfully worked on the essentials of Myanmar, Bangladesh and Nepal whereas the complexion  in Sri Lanka and the Maldives is slightly different. An articulation of what China has achieved and the need for India to quickly take stock and appropriately countervail China

The enterprise may sound a bit obtuse. After all, why should  theall powerful ‘Dragon’ be lowered in credentials to a reptile. The compelling logic emerges from the manner of engagement by China, with our immediate neighbors. It would be relevant to state that the Chinese are not great at Chess. Their preferred game is GO, where victory goes to the one who surrounds his enemy. The formidable Anaconda seldom kills by crushing. It waits for every exhalation of the victim and with the outgoing life breath it tightens its Squeeze. Death by asphyxiation. Slower, with no external injury to the victim, horribly unambiguous.

China has successfully worked on the essentials of Myanmar, Bangladesh and Nepal. On the West itsall weather relationship with Pakistan, has assured it of a firm footprint in Gilgit, Baltistan, and the Shaksgam Valley. With Pakistan in contrast the Dragon form was enough. It did not have to unleash the Anaconda. While its inexorable influence and signature in the three nations mentioned, is distinctively different its approach and intentions are similar. The complexion in Sri Lanka and the Maldives is slightly different.

In Myanmar, China had a slow start, with an antagonistic zone along their mutual borders, for decades. Till the Nationalist Chinese were pushed out by Mao, to Taiwan the region of Yunnan and areas astride the Ruili River was ungovernable. Despite years of conflict with the Myanmar Armed forces, China by the 90’s had become committed partners to the ruling Myanmar Military. What followed was a Juggernaut of enterprises and infrastructure projects with focused objectives.

Even Daw Aung San could not resist the ability of China to transform the Myanmar Economy. There is little doubt that the recent Coup and ongoing unrest in Myanmar, was instigated with Chinese blessings. The Chinese support of the Military Junta in world fora speaks for itself. While Dragon Fire had not succeeded, the Anaconda squeeze was working. As Myanmar convulsed and exhaled in the Coup, the Chinese, hoped for a Tiananmen Square like event, and rapid Military Supremacy.

The spirit of the populace however has them stymied. Not only are there protests, civil disobedience, but the ethnic minorities along the frontiers have broken into armed insurrection. A government of National Unity has been set up in Thailand. While the Junta is hopeful of a rapid trial for Suu Kyi this is unlikely to be an easy event.  Civil populace has vandalized and attacked Chinese residents and commercial facilities. They remain unrelenting in their opposition to the Chinese. With the world’s focus on an aggressive China, the nations that matter are unlikely to accept a silent squeeze and swallow by China. Huge Chinese stakes are on hold.

Nepal, for China was also running well. The ultra nationalism of PM Oli, and strident anti Indian stance was working fine. Oli a dedicated Sinophile, had gained so much traction from China, that India was definitely being pushed into the little league. With a deep and historic linkage to India and an irreplaceable human contact, China could not breathe fire. The Anaconda had to be let loose in the streets of Kathmandu. Riding anti India resentment, actual and perceived, China and Nepal were denying oxygen to India, a forte of the Anaconda.

Unfortunately, Politics answers only to itself, and Power is a poor mistress. Plunged into a constitutional crisis since Dec 2020, PM KP Sharma Oli has been unable to keep his Majority and Seat. Despite President Bidya Devi Bhandari giving opportunity to both factions to form governments, the impasse continued. The present status is that the parliament has been dissolved and midterm polls announced, while the Supreme Court will hear petitions against the dissolution.  Deeply embedded in guts of the dispute are the acute differences between the iconic Pushpa Kumar Dahal, Prachanda and Oli. The Chinese ever present have sought to play King Maker for some time. Brokered by China the Nepal CPN UML and CPN Maoist were merged to form the Nepal Communist Party in May 2018. This is a typical approach for Chinese interference overseas, significantly also adopted in Myanmar. Unfortunately for them, the Nepal SC overturned this merger in May this year.  The Chinese Anaconda does not know how to wrap its coils. It must roll in the dust or take a vacation till a new Government is formed. China will undoubtedly be working overtime for favorable outcomes, but no squeezing available. At stake is an outstanding strategic posture in Nepal, bringing it right up to the non militarized border with India, with its Lumbini project. But once again the populace of Nepal will exert their independent voice.

While the Anaconda has been swimming around in the Bangladesh Rivers and Sundarbans for many years, its precondition of a firm hold is missing. Both the Dragon and its operative Reptile have missed the point. Whatever the political complexion, Bangladesh is a nation and people, who have a centuries old culture, and emotional History. Its people and socio cultural living heritage are influenced by Tagore, Kazi Nazrul Islam, and BangaBandhu, Sheikh Mujib’s vision. The Constitution that incorporates the Governance of Medina, is inclusive and pacific. Bangladesh has its share of issues, but responding to the siren song of China is not on the horizon. Independent minded and focused, the economic and equipment based ties to China are pragmatic and not favored.

Consequently, the recent statement in Bangladesh by China’s Minister of Defense Wei Fenghe (in April), defeats comprehension. By stating that Bangladesh must resist powers outside Asia, as well as implying that the Quad is a Military Alliance, sounds like advice to an ally. Which Bangladesh is not. Here it appears the dragon has hissed prematurely, and the Anaconda will have to wallow in the water much longer.

Sri Lanka is in a different category. Here the internal politics and the mirror reflection of sentiments in Tamilian diaspora, have cast India in a fixed mould. Benefitting immensely from the Indian Peacekeeping Forces, yet stigmatizing them, Sri Lankan polity, has veered away from India, since the 1990’s.

A quick flirtation with China revealed great potential. Consequently, post the IPKF withdrawal, and the brutal campaign against the Tamil minority, China quickly swallowed up all the strategic space vacated by India, and is now embedded into the landscape. Arguably, the Dragons deep breathing was enough.

No hissing no fire, no release of the Anaconda.

There was period of Sri Lankan assertion, in the Hambantota deal, but it proved such a poor asset that China had to look elsewhere. Setting its eyes on the Colombo Port and the projected Port City cum Economic Zone, China once again had to raise the Anaconda. The project being an affront to Sri Lankan Sovereignty saw significant resistance. The reptile had to squeeze out all Indian influence. Colombo Port is the main terminus for Indian Shipping and Trade. With the May 20 Parliamentary assent, Colombo City Port as part of The Special Administrative Region Peoples Republic of China has become a reality. China has resultantly secured exponential strategic positioning in the Indian Ocean.

Sri Lanka has also become a dedicated partner of China, with all the resultant consequences. If a later political dispensation seeks to loosen Chinese bindings, it may find it difficult to breathe.

The Maldives is a case where the archipelago and its populace have just missed the deathly embrace by a few deep breaths. China had swamped the nation, with aid, tourists and grandiose infrastructure plans. Central of course were the projects for development of deep sea ports significantly for Chinese submarines. As Chinese destiny prospered under President Abdullah Yameen, unhindered, it was the people’s voice that upstaged them. Comprehensively defeated in 2018, by Mohamad Solih, the current President, the nation is back in its democratic mould and Chinese ambitions have had to fold back like an accordion.

Given the strategic pause that Indian ambitions have suffered due to the Pandemic, China has moved aggressively in our neighborhood. Characteristically it continues to stumble when confronted by the free will of citizens. Here the Dragon and its pet Anaconda fail. China has no democratic history or credentials. An authoritarian system cannot understand or contend with free will. Whether it is the Balluchis of Gwadar, or the Burmans of Mandalay, the Chinese and their methods are disliked. Squeezing Governments and authorities in such environments is not enough.

India will need to quickly take stock and emerge from the Pandemic sure footed. Myanmar is riddled with uncertainties. The Chinese are wedded to the Junta, India has more flexibility. Nepal can swing away from China; India must be prepared to take the slack and assist Nepal, not try and dominate it. Bangladesh is close to India and focused on its own priorities there seems to be no opening for the Anaconda. While Maldives provides a breath of fresh air, Sri Lanka, will force us to navigate the catacombs of politico strategic issues.

More significantly, India must take this opportunity to revisit its manner of doing business in our immediate strategic neighborhood. Strategic footwork has to be nimble, decision making rapid and delivery expeditious. The Chinese have proved to be patient and tenacious. Their slackening will only be till they can re-engage. There is a convergence of events that has given India a window with finite frames. Our well orchestrated surge through would be appropriate and prescient.