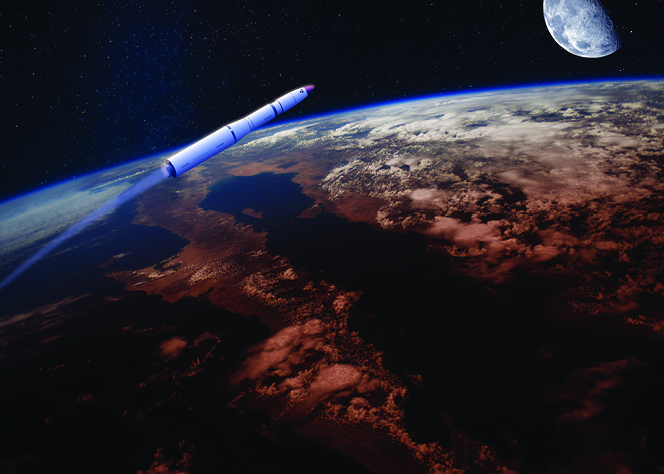 A new arms race is now on; it is the quest for hypersonic weapons. These weapons offer great advantages in terms of speed and stealth. Currently China is a leading player in hypersonic capability followed by Russia while the US is well behind. The write up details India’s status and the next steps that need to be taken

Media reports on 21 Oct 2019 stated that DRDO has started work on the ‘next gen’ hypersonic missile. A wind tunnel to test and fine-tune the technology will be operational soon. Defence Minister Rajnath Singh is likely to inaugurate the facility. This article assesses India’s status in the hypersonic race. What threats do we face and where do we need to go, in this field , in the foreseeable future?

Hypersonic is the new buzzword. Leading nations are investing huge time and resources to beat their potential adversaries in getting one better in creating a hypersonic arsenal. Why so? The answer is, that as on date, hypersonic weapons are unbeatable by existing missile defences, the world over.

Hypersonic weapons are those weapons which fly at speeds equal to or in excess of Mach 5 (approx. 6000 Km/h) which relates to about 1.66 Km/sec. At this speed, such weapons can strike anywhere in the world in less than one hour.

Essentially, there are two types of hypersonic weapons in existence/under development today. These are hypersonic Cruise Missiles (HCM) and Hypersonic Glide Vehicles (HGV). Unlike conventional cruise missile which upon initial boost to a speed and altitude, maintain a steady course to the target, HCM is an ‘all the way powered missile’ where power is sustained throughout the flight making speeds in excess of Mach 5 possible.

There are essentially four factors which make these weapons ‘unbeatable’. The most significant is speed. Due to this feature, the weapon descends upon its intended target almost like a ‘lightning bolt’ beating the air defence weapons hollow in their ‘reaction time cycle’.

Notwithstanding the fact that the current technology, backed by artificial intelligence, stored threat libraries, auto recognition techniques, auto data transfer systems, big data analytics etc., has automated to varying degrees  most of the air defence cycle functions, it still takes a little time from the word go before effective fire can be delivered on the incoming threat. This time, however small, is proving to be far too much for taking on a HCM or a HGV before it can make a catastrophic kill. Given the near inability of conventional radars to detect and identify hypersonic threat vehicles in the time slot available, speed itself becomes a combat virtue of ‘un-detectability’ for such vehicles. The new cliché is ‘Speed is the new stealth’.

Unpredictability is another factor hugely in favour of hypersonic weapons. Unlike conventional ballistic missiles which operate on the principle of gravity and whose future point of impact can be very accurately predicted once their powered phase is over and the missile is in free flight either in the endo or exo atmospheric region, hypersonic weapons as stated, are ‘all the way powered’ these remain low and can strike at lightening speeds with a capability to change targets instantaneously. Due to this, such weapons hold large swaths of area under threat at the same time by remaining unpredictable as to their point of impact.

At such tremendous speeds, even the catastrophic kill effect of such weapons is huge. For a weapon flying at Mach 6, this factor multiplies nearly 36 times with reference to a conventional kinetic kill weapon.

So much for the rationale of why all leading nations, viz, China, Russia, US etc are active members in the hypersonic race.

Where are We? What Threats do we face?

Sharp-focussing on to our northern neighbour, it is stated that China is a leading player in the hypersonic capability followed by Russia while the US is well behind. China is in possession of both HCMs as well as HGVs.

In a period from Dec 2017 to May 2018, China tested a HGV aboard a ballistic Missile DF 17. The HGV flew for 1400 km before making an impact on its intended target in the Xinxiang Province. An accuracy of few meters was achieved.

According to a Beijing based military analyst Zhou Chenming, China has made the HGV technology as a part of its nuclear strategy. Another, more capable HGV is being perfected on DF 41 ballistic Missile (CSS X 10-next generation ICBM, -range 12000 to14000 km- with single/three/six/ten MIRV warheads.). The same is likely to get initial operational capability by 2020.

As to HCM, China demonstrated its HCM on 03 Aug 2018 when its so called hypersonic aircraft Starry Sky 2 (HCM) developed by the Chinese Academy of Aerospace Aerodynamics (CAAA) did a successful flight after being boosted by a rocket. It flew for 10 mins, achieved an altitude of 30 km and a speed of 5.5 to 6.5 Mach.

As of Sep 2018, China has been testing hypersonic vehicles with adjustable speeds and precision attack capability. Such weapons are being projected as unstoppable carriers of nuclear warheads. The vehicles being tested are called D-18 1S, 2S, and 3S.

There is no doubt that China is a growing hypersonic power. It is also true that as on date there is no counter to hypersonic weapons world over. But is that all ? Following also need to be considered:-

Way Ahead for India

Where does that lead to? Essentially a two track approach needs to be adopted:-

o             Keep up with the technology and the hypersonic capability. Don’t be technologically beaten/left out.

Focus India- Where are we?

It may surprise the reader to know that hypersonics started in India way back in 2004 when the DRDO took up the conceptual design work for a hypersonic airframe. In 2008, Dr VK Saraswat, the then DG DRDO, announced the possible dual use of the hypersonic technology both as a HCM, as well as, a low cost satellite launch vehicle.

In the period from 2010-2016, developments in hypersonic designs continued along with their testing in Wind Tunnels operated by Israel Aerospace Industries (IAI) and National Aerospace Labs. Functions under tests were aerodynamics and thermal aerodynamics since at hypersonic speeds one of the major challenges for the aerodynamic surfaces is to handle the super high temperatures so generated. Other challenges to overcome were the mechanical and electrical integration of constituent parts and operationalisation of the  control and guidance systems.

On 12 Jun 2019, there was a trial of a Hypersonic Technology Demonstration Vehicle (HSTDV) boosted by Agni1 missile. HSTDV is a 5.6 m long aerodynamic vehicle which is a HCM. It can achieve a speed of 6.5 Mach and can rise to an altitude of 32 Km in 20 secs. During the test, the HCM was ejected as planned and its scramjet engine got auto ignited propelling the vehicle to a speed of 6 Mach. The mission was deemed a partial success.

Besides the HSTDV, India has made inroads into the hypersonic field in other weapons as well. India has successfully tested the Shaurya surface to surface tactical missile, more than once. The weapon is capable of reaching a speed of 7.5 Mach and has a warhead carrying capability of 1Ton (conventional or nuclear). The claimed accuracy is 20-30 m.

Even BrahMos which currently has a distinction of being the fastest cruise missile of the world is making forays to enter the hypersonic domain. The product will be called BrahMos Hypersonic Cruise Missile. It will be capable of flying at Mach 7 and will have a range of 600 Km. It will be possible to launch this missile from land, sea, sub surface or air. The testing of this missile is planned in 2020 while it is likely to be operational in 2022.

Even the interceptors (AD 1 and AD 2) planned for Phase 2 of the indigenous Ballistic Missile Defence Programme of India (Codenamed Programme AD) are to be in the hypersonic domain.

While it is one thing to say that the hypersonic weapons are ‘unbeatable’ as of date, there has to be a ‘shield for every sword’. Surely, the defenders are taking on the challenges of countering hypersonic weapons sometime in the future. The eternal cause-effect’ cycle thus continues.

The proverbial ‘shield’ stated above  has to be totally new and must reside on a much higher pedestal of technology than is the threshold today. A paradigm jump is needed. A small glimpse:-

Way Ahead in the Foreseeable Future

The way ahead for India could be as under:-

So much for the hypersonic race. There is a need to keep running and keep pace with the front runners.