The Indian Navy: From Yesteryears till Today

Sub Title : The course of the Indian Navy, from its erstwhile inception to the present form as a blue water Navy 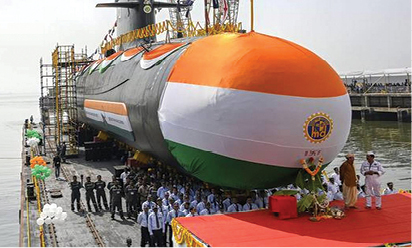 India’s prominent peninsular orientation and flanking island chains overlook strategic sea lanes in the Indian Ocean, linking her security and prosperity to the seas. The seas have traditionally been the primary means of trade: over 90% by volume and 70% by value of her external trade even today is transacted by sea.

In the last few decades India has witnessed an increasing dependence on the Indian Navy (IN) for security in its neighbourhood and beyond in the Indian Ocean. With the growing presence of multi nation Navies in the Indian Pacific Region; The term ‘Indo-Pacific’ refers to the maritime space stretching from the Indian Ocean, across the littorals of East Asia to the western Pacific Ocean. Without doubt, the 21st century will be the ‘Century of the Seas’ for India and that the seas will remain a key enabler in India’s global resurgence. The Navy’s roles and responsibilities have accordingly expanded to keep pace with changing geo-economic and geo-strategic circumstances.

The Indian Navy (IN), is responsible for the high seas-focussed security of the country. The defence budget afforded to the IN from the 90s to early 2000s accounted for an increase of six percentage points up until 2008.  Between 2012 and 2020, the budget for the IN however, has witnessed a substantial decline of five percentage points. This clearly is at conflict to the considered strategic necessity.

IN is a largely capital-intensive force, and it is dependent on gargantuan provisions of central funding to ensure that it acquires equipment amounting to billions of dollars necessary for its emergence as a comprehensive blue-water Navy capable of extending its powers well beyond its shores, the Indian EEZ, and its presently-limited but strategically-prudent Maritime Zones and Areas of Interest.

India’s maritime rejuvenation is only as recent as the commencement and the penetration of India’s Look East Policy from the early 1990s.

India’s naval establishment is presently engaged in coupling naval modernisation with naval indigenisation, a core characteristic of India’s resolve to achieve ‘atmanirbharta’, or self-reliance in the realm of defence. To usher in an era of ‘atmanirbharta’, India recently announced a ban on imports of 101 defence items effective December 2020, including conventional submarines (from 2021).

From the year 2000 onwards, successive maritime strategies have been promulgated by the IN. These documents have highlighted the extensive contours of strategic thinking within the Navy’s top brass and the expediencies associated with the implementation and attribution of these strategies to their respective domains of operation.

Of these, the latest – marked for the year 2015 – is centrally themed ‘Ensuring Secure Seas – Indian Maritime Security Strategy’ which emphasizes the need for the IN and the rest of India’s maritime security establishment to fulfil its perceptible role in the seas that are chiefly responsible for the transit of India’s critical trade and commerce.  ‘Ensuring Secure Seas’ lays out the primary and secondary areas of strategic interest for the Indian Navy, and actionable imperatives for the provision of net maritime security to strategically susceptible regions.  India’s maritime security objectives, flowing from the above aim, are:

♦  To deter conflict and coercion against India.

♦  To conduct maritime military operations in a manner that enables early termination of conflict on terms favourable to India.

♦  To shape a favourable and positive maritime environment, for enhancing net security in India’s Areas of Maritime Interest.

♦  To protect Indian coastal and offshore assets against attacks and threats emanating from or at sea.

The strategy has, focussed on the following:

♦  The safety and security of seaborne trade and energy routes, especially in the IOR.

♦  The importance of maintaining freedom of navigation.

♦   Undertaking cooperation and coordination between various navies, to counter common threats at sea.

The Indian Navy and the Years Ahead

It is certain that the IN is taking somewhat impressive and encouraging steps towards emerging as a first-rate force for the twenty-first century by implementing plans, procedures, and programmes that fuse together urgently needed long-term planning with able policymaking.  Modernisation remains an utmost priority for the force.  However, the Navy’s present inventory may fall short of requisite capabilities and capacities for the successful conduct of a hypothetical two-front or multifront maritime war. Overtures to peace are dispensed in the form of Humanitarian Assistance and Disaster Relief (HADR) operations wherein the IN has noticeably and admirably contributed across the Asian continent.

Budgetary allocations merit a boost owing to the immense significance of the IN in the emerging and geopolitically-sensitive hinterlands of the strategically supreme Indo-Pacific Region (IPR).  As per communications of the IN, there may be a wide gap between allocated budgets and envisioned economic, military, and security objectives which needs to be addressed on a priority basis. This gap must be absolutely narrowed in order for a win-win situation to emerge in the context of the IN’s diverse array of operations, which are supported by its expanding operational, strategic, and tactical capabilities.

India’s contemporaries in the Asian region have vigorously embarked upon naval modernization programmes that do justice to their burgeoning reputations as regional and global maritime powers. Countries such as Vietnam, Malaysia, and Japan and South Korea have considerably scaled up their inventories with acquisitions of attack submarines, destroyers, frigates, amphibious ships, etc.

Aside from the technicalities that manifest themselves as a hindrance to rapid modernization, India’s leaderships have been constrained financially for prolonged periods and have lacked the political will and oversight to meet the demands of not just the maritime forces, but several other branches, too.

This offensive element continues to retain its lethality, unlike some of the partner countries of India such as Japan and Indonesia – two countries unequivocally committed to ‘defensive defense’.  India’s non-declaration of a principled doctrine with respect to conventional warfare has afforded it the necessary flexibility to maintain an ambiguity in pursuit of both offensive and defensive defence aims and objectives to overcome terrorism and maritime

piracy.  Only India’s posture with regard to the first use of nuclear weapons retains an approach akin to ‘defensive defense’, or a ‘minimum credible deterrent’.

On the road to 2050, the Indian Navy has indeed come a long way so far and, inarguably, also has a long way to go.  Some of the new and evolving technologies that will need investment are:

♦  Extensive use of Satellites that are central to Naval communications. GSAT-7 or INSAT-4F is a multi-band military communications satellite developed by ISRO. The Indian Navy is the user of the multi-band communication spacecraft, which has been operational since Sep 2013.

♦  Electromagnetic technologies for aircraft and projectile launch and directed energy systems using solid-state/fibre-optic lasers, need to be given priority in development/induction.

♦  A blue water navy would require increased reach and sustenance, longer operational periods, and reduced maintenance. Air Independent Propulsion (AIP) for submarines, and nuclear propulsion for both submarines and ships, constitute the next evolutionary step. The option of electrical propulsion will help reduce noise levels.

♦  Cyber Security and Information Warfare are as crucial to the navy as any other military service.

Strategic thinking, an essential feature in a country’s harmonised national security administration, has received a considerable impetus since the establishment in 2005 of a national-level think tank such as the National Maritime Foundation (NMF), which is primarily allied to the IN, and supplements the work of the Directorate of Strategy, Concepts and Transformation (DSCT) – which is the de facto think tank of the IN and is overseen by the Chief of Naval Staff and other high-rank officers of the Navy.  A second official institution of the Indian Navy that works on a round-the-clock basis is the Maritime Doctrines and Concepts Centre (MDCC), which operates under the command of the Flag Officer Doctrines and Concepts (FODC).