Time to Take Interoperability to Next Level: Interchangeability

Sub Title : Militaries must start moving in this direction even if it entails taking baby steps in the beginning 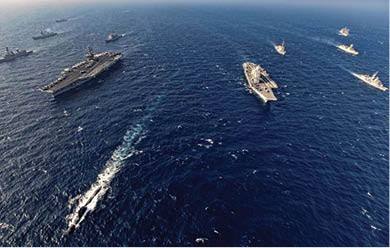 Interoperability enables militaries that operate jointly to achieve effective and efficient cooperation basis synced doctrines, procedures and communication set ups. However, military leaders have now started feeling that interoperability needs to be taken to the next level viz interchangeability. Not as easy as it seems. Nonetheless militaries must start moving in this direction even if it entails taking baby steps in the beginning

Interoperability is an important subject of discussion among strategic-military planners and operational commanders. It features on a daily basis among militaries that operate jointly or are part of any alliance/grouping/coalition and enables them to achieve effective and efficient cooperation. In its broadest sense, it involves technological-technical compatibility and synced operating procedures, doctrine, tactics, and communication procedures. Interoperability also features in politico-diplomatic discourses and is considered a tool for diplomacy wherein states work together to foster regional security, promote stability, and prevent conflict.

The US (Pentagon) defines interoperability as “the ability to act together coherently, effectively, and efficiently to achieve tactical, operational, and strategic objectives,” through exchange of “information or services” by using electronic communications.  The US’ understanding of interoperability extends beyond operations into military industrial complexes and in October 2020, Secretary of DefenseDr. Mark T. Esper  had noted that building capacity and capabilities of like-minded nations will foster  “interoperability with friendly militaries while creating a stronger domestic industrial base that can compete in the global marketplace,”

According to a Backgrounder published by NATO Public Diplomacy Division “Interoperability allows forces, units or systems to operate together. It requires them to share common doctrine and procedures, each other’s infrastructure and bases, and to be able to communicate with each other. It reduces duplication in an Alliance of 26 members, allows pooling of resources, and even produces synergies among members. Interoperability does not necessarily require common military equipment. What is important is that this equipment can share common facilities and is able to communicate with other equipment.”

Britain’s Integrated Review and Command Paper highlights that  future defence posture should be such that it integrates both at the national level, and become “more interoperable and interchangeable with key partners and allies internationally”. Furthermore, interoperability with partners “demands regular training and shared approaches to doctrine and command and control functions” and these “need to be sustained over time for the desired capabilities to produce effects in peace and war.”

Indian Maritime Security Strategy  (MSS) states that “Good interoperability will strengthen flexibility in catering to rapid changes that may occur during the conduct of operations”- spanning development of “common doctrines, coordination of strategies, joint planning and perspectives. Commonality of equipment and common standard operating procedures, which are essential will continue to be focus areas.” The MSS also “aims to promote security and stability at sea, and enhance cooperation, mutual understanding and interoperability with maritime forces of friendly nations”. It further goes on to assert that interoperability “provides a platform to promote shared understanding of maritime issues, formulation of common strategies and cooperative measures, and strengthen capability and interoperability amongst regional navies, to address various maritime security challenges….”

Interoperability is a significant issue for the Indian Navy, and it features prominently in its engagements with navies across the globe. It is practiced during naval exercises such as the Malabar (US), Varuna (France), Konkan (UK),  JIMEX (Japan), SIMBEX (Singapore) , AUSINDEX (Australia), to name a few. In particular, the Indian and the US navies have developed a high degree of interoperability through the Malabar series of exercises.  Over the last nearly two decades, these exercises have grown in sophistication including participation by nuclear (surface and subsurface) platforms.

In the above context, it is useful to recall the Malabar 07-2 held in the Bay of Bengal included three additional navies’. Royal Australian Navy, Japanese Maritime Self Defence Force, and the Singapore Navy also participated in the India led multilateral naval exercises. At that time, Vice Admiral Yoji Koda, Commander of the Japan Maritime Self Defence Force had stated that “Internationally, navies understand each other” and “we are flexible enough to learn different ways from the international navies and it is easy for us to become friends on humanitarian issues.”

In 2009, Vice Admiral John Bird, Commander of US 7th Fleet noted that the trilateral naval exercises (expanded Malabar exercises involving India, US, and Japan) provide an opportunity for interoperability among navies and in that context, observed “We look forward to this opportunity to work with the very professional maritime forces of India and Japan…Malabar gives us the chance to build greater interoperability with two of our most important regional partners,”

There is an apparent sense of caution in the US on the issue of India-Russia military technical cooperation. Washington has warned New Delhi of the significant risk to interoperability when purchasing Russian systems particularly S-400. Clarke Cooper, Assistant Secretary of State for Political-Military Affairs under the Trump administration had warned “look, you take delivery of the S-400, you’re going to potentially jeopardize interoperability with the United States, and you’re going to potentially jeopardize interoperability with other partners that you value… we urge all of our allies and partners to forgo transactions with Russia that risk triggering sanctions.”

The above notwithstanding during Malabar series of exercises, the Indian Navy has been fielding  Russian origin platforms (conventional submarines and aircraft). By all accounts these have proven successful, and the US Navy has over the years got used to Indian-Russian origin ships and aircraft. Also in June this year Indian Navy and Air Force participated in naval exercises with the US’ Ronald Reagan Carrier Strike Group (CSG 5), in a Passage Exercise as the CSG was transiting the Indian Ocean. The equipment fielded by India included US and Russian origin platforms. Indian Navy fielded INS Kochi and  INSTeg,  P-8I maritime patrol and reconnaissance aircraft and MiG-29K fighters.  From the IAF Jaguars & Su-30 MKI fighters, AWACS, AEW&C and Air to Air Refueller aircraft participated. The exercise involved joint multi-domain engagements to sharpen the regional maritime security construct to uphold a rules-based maritime order in the Indian Ocean Region.

According to Commanding Officer of the Strike Fighter Squadron (VFA) 102, “Flying with our counterparts from the Indian Navy and Air Force has been a great opportunity for the aircrew assigned to CTF 70… We developed critical relationships that we hope to renew in the near future with a shared and continued focus on multi-national interoperability and the highest levels of professional airmanship.”

In recent times, a few navies have begun to practice ‘Interchangeability’. The British Royal Navy conducted its annual Exercise Joint Warrior which included its aircraft carrier HMS Queen Elizabeth which had F-35B jets from the UK and the US Marine Corps embarked on it. These operated as though they were “one single carrier air wing” but acting independently. By all counts, it was a pioneering move and may have set the future trends in Interchangeability.

In October 2020, First Sea Lord, Admiral Tony Radakin hosted the 2020 Atlantic Future Forum onboard HMS Queen Elizabeth. Alluding to the close friendship between the US and UK navies, the First Sealord spoke about the ongoing “move towards ever greater interchangeability” between the two navies. The US Chief of Naval Operations (CNO) Admiral Mike Gilday, who joined the 2020 Atlantic Future Forum through video-conference, announced the establishment of “future integrated war fighting statement of intent [between the US and UK navies] that will set a cooperative vision for interchangeability.” The CNO expanded on the ‘intent’ and stated that “We will synchronise pioneering capabilities, strengthen operating concepts, and focus our collective efforts to deliver combined sea power together …By organising our cooperation on Carrier Strike, underwater superiority, Navy-Marine integration, and doubling down on future war fighting, like unmanned and artificial intelligence, we will remain on the leading edge of great power competition.”

The concept of interchangeability has attracted yet another western power – the French Navy – which has plans to internalize it. In June 2021, Admiral Pierre Vandier, Chief of the French Navy held a trilateral maritime discussion with Admirals Mike Gilday and Tony Radakin in Toulon, France, during which they may have discussed Interchangeability. They “signed a trilateral cooperation agreement reaffirming their commitment to deeper co-operation and interoperability around the globe—in both operations and exercises—to meet the challenges of tomorrow and maintain a strategic advantage at sea”, It is useful to mention that the US, French, and United Kingdom navies regularly operate together, including participation in the NATO exercise Steadfast Defender and Mine Countermeasures Exercise in the Arabian Gulf.

There is no doubt that interoperability is more than just a military expedient in future warfare; it is a politico-strategic advantage. Interoperability gives militaries strategic agility in terms of partners and platforms, and multiple domain options to respond to various threats. However, this is dependent on organizational structures, equipment and operational philosophy. Interchangeability is likely to be a defining feature of any other bilateral naval engagements. Though Quad Member naval engagements reflect a high level of interoperability, Interchangeability among the Quad navies will take time.

Indian and the US navies are primes for Interchangeability which could begin with the P 81 maritime patrol and reconnaissance aircraft, currently in service with both navies, for deployment in the Indo-Pacific.