Sub Title : Russia’s approach to cyber warfare against Ukraine has been rather subtle 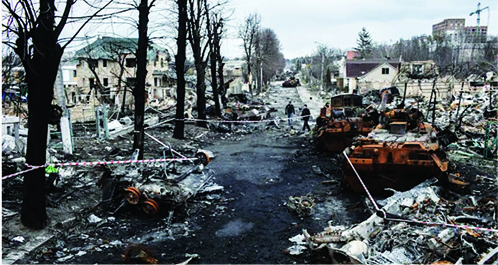 Ines Kagubare, Cybersecurity Reporter at The Hill has said that Russia’s approach to cyber warfare against Ukraine has proved more subtle so far than many expected. In Part I of the article, we discussed substantial CEMA activity leading up to the Russian attack on Ukraine. Now seemingly there appears to be a lull and only minor activity is being reported. The article also brings out the tactical and strategic lessons for India

Consequent to the significant CEMA activity preceding and perhaps even during the initial stages of the Russian offensive the scale thereof has receded considerably. This raises the question–why?

♦    Why have they not attacked electricity and railway grids to unsettle movement of western arms in Ukraine?

o    are they waiting for the right moment?

o    or have their capabilities been vastly overestimated?

♦    Why have they failed to defend the large-scale destruction of their tanks and ships?

o    Are their tactics flawed?

o    Or are they lagging behind the west in capabilities and are helpless against modern guided weapons?

♦    Are they exercising restraint?

o    Not really, the reported brutal attacks on civilians bear testimony to that.

o    Surely their capability is not what had been feared.

US Cyber Command Director General Paul Nakasone has however challenged the idea of Russia’s CEMA inactivity. He talks of a series of destructive attacks in Ukraine, including targeting of the country’s satellite communications system in March. “We’ll know more with passing years as information comes out,” he has claimed.

Indian Military CEMA experts too have contrasting if not conflicting views, which makes interesting analysis.

Russia has not deployed its full potential; this operation is primarily messaging to NATO while securing eastern Ukraine. Both objectives fulfilled with controlled aggression. He was expecting NATO forces to join, hence conserving his best. – Rajeev Ohri, CEMA Expert

Another view is that the Ukrainians are doing better.

♦ Ever since Ukraine fell victim to two separate destructive cyberattacks in 2015 and 2017 on its power grid and key institutions, Kyiv has made significant investments to improve cybersecurity of its networks with substantial assistance (financial and technical) from the US and European Union.

♦  Ukraine’s defensive capability, backed by the hunt forward and defend forward support from US and NATO allies have been effective in blunting the edge of Russian Cyber attacks

♦    Ukrainians are ‘visibly’ using social media well for propaganda, with President Zelensky leading from the front.

♦    In the Cyber Space, many Russian governments and financial institution websites have been attacked, taken offline, and sometimes replaced with anti-war messages.

♦    In the Tactical Domain, Ukrainian urban warriors seemingly destroy Russian tanks and other armoured vehicles at will. Also, the sinking of Russian Flagship Moskva compliments their fighting skills while raising doubts of the Russian ability to defend.

I feel that the cyber front has NOT been passive. However, the effects may be shrouded in ambiguity. NATOs ‘Hunt Forward’ and ‘Defend Forward’ actions have added a punch to Ukraine’s CEMA operations. –B Ramesh, CEMA Expert

Hunt Forward operations by the US Cyber Command involve physically sending cyber protection teams to foreign nations on their request to hunt for threats on their networks. According to reports, they have since 2018 deployed teams more than 28 times to 15 nations including Ukraine to bolster defense against Russian cyberattacks.

A new development has been that of Ukraine being admitted to NATO accredited Cooperative Cyber Defence Centre of Excellence (CCDCOE), a cyber knowledge hub, research institution, training, and exercise facility as a contributing member on 4 Mar 2022. While it is not the first non-NATO member to be admitted, it is significant because Russia’s motive for this ‘Special Military Operation’ is to maintain a physical buffer between the eastward encroachment of NATO. Russia’s response to this sly inclusion of Ukraine in the Western community albeit in the Cyber Space is awaited.

Another significant development of this war is volunteer hackers from around the world launching uncoordinated attacks on Russian government and infrastructure; in a Networked world a seeming bully will be targeted universally. Russians have had several government websites knocked offline and some rail operations in Belarus disrupted.

Why is Russia Losing so Many Tanks and Armoured Vehicles to Ukrainian Handheld Weapons?

The Russian T-14 Armata tank features the Afghanit Active Protection System, which includes a millimeter-wavelength radar to detect, track, and intercept incoming anti-tank munitions, both kinetic energy penetrators and tandem-charges. Currently, the maximum speed of the interceptable target is 1,700 m/s (Mach 5.0), with projected future increases of up to 3,000 m/s (Mach 8.8). It is reported to protect the tank from all sides.

♦ Russia has one of the largest number of tanks in the world, ironically only a small fraction is the modern T-90 Tanks, the rest are vintage T-72s. They are lacking in modern defensive measures like the Active Protection Systems which are very effective against weapons fired at close range on tanks defiled up in urban warfare.

♦ Rasputitsa a natural phenomenon in which the ground becomes muddy due to melting of snow during this time of year saved the Russians during Op Barbarosa in World War I, it is proving to be their nemesis now. Bogged down tanks make easy targets.

Russian Military enormity and efficacy is yet not on display in this war. –Col Sanjay Mahajan, Armoured Corps Veteran

Conclusively: The Tank is a weapon of manoeuvre and NOT a canon to take Pot Shots at Residential Buildings, the Russians have themselves to blame for making the mighty Tank a sitting duck for the Ukrainian Urban Warriors.

India mostly deploys its tanks in the vast deserts of Rajasthan and the Plains of Punjab. Even those used in the Northern Borders are on rocky and sandy plateaus. All these are excellent tankable terrain and India enjoys overwhelming strategic advantage proven by decisive victories in the Sialkot Sector both in the 1965 and 71 Wars. And, as an effective deterrence in the Desert during these wars and in Chushul and Galwan Sectors during 1962 and 2020 with China.

Indian Army manoeuvre tactics cater for grouping of CEMA elements (integrated Tactical Communications and Electronic Warfare) with every Combat Team, their tanks do not deploy in penny packets and bunch up along roads. There is however a need to modernise and provide Active Protection to the tanks. Also, the High-Altitude Areas must have Light Tanks for greater manoeuvre, one size fits all strategy will not do.

While there was a lot of chatter after Pakistan demonstrated its fire and forget Anti-Ship Missile Harba recently in Qatar. Historically, it has been well demonstrated in the 1971 War, Op Vijay 1999 and Op Parakaram 2002 that Pakistan Navy is an underdog to the Indian Navy. So is Ukraine for Russia, they still manged to sink Moskva with the weapons and operational support provided by the west. Pakistan as a Chinese proxy can therefore be a reasonable threat.

Harba uses Digital Scene Matching Area Correlator camera, radar, and infrared seeker to follow and strike targets. Tactically, the Indian Navy warships are in a position of strength. They are equipped with Barak 1 and Barak 8 Surface-to-Air missiles, along with a Close-in Weapons Suite (CWS – An Electronic Warfare aided Kinetic Energy System) to tackle aerial and cruise missile threats that may have broken through the outer defence. According to some analysis the Russian Warship Moskva was blind to the attack, their fire control radars were not switched on; complacency killed the cat. Indian Navy must avoid such indifference and neglect to the Pak threat.

♦  Future battles will be fought in the Land, Air, Sea, Space and Cyber Space. Bread and Butter issues notwithstanding, Modernisation and Preparedness in all is unavoidable.

♦  Technical sanctions and economic coercion is an evolving form of Hybrid Warfare, Atmannirbharta is an absolute must. However, validation and trials must be stringent to ensure value and effectiveness. Weapons Kill, so can Mistakes, there should be no favours or concessions to the industry.

♦  Alliances are crucial in the ‘Art of War’, these must be well thought of from a position of strength.

♦  Upgradation and modernisation of equipment and policies must be ongoing. It must ensure interoperability between legacies and minds.

♦  There is an urgent need to deploy a modern Tactical Communication System with high mobility, reliability, redundancy and survivability in an increasingly contested Electromagnetic Spectrum. It is a crucial battlefield element for effective Command and Control and real time Situational Awareness.

♦  Commanders must train to develop very sharp cognitive skills to keep pace with technology and warfare. They cannot be overwhelmed by the quantum of information available and the diversity of the weaponry at their command.

♦  Information is a weapon at both at Strategic and Tactical levels, it has to be gainfully exploited for decisive victory.

Have Strategy Pundits who predicted that conflict in the Cyberspace is destined to supplant Conventional Conflict been proved wrong?

Not really, remember others have predicted that future wars will be ‘Short and Intense’.

Honestly, Wars tend to follow their own direction; war is a true chameleon, there can be no guarantees to what colours it takes (All out, Special Operations, Hybrid, Asymmetric, Guerrilla, Counter Insurgency….). The only perpetuity lies in being ‘Prepared for War’. Those who are, save their civilisation, others get subjugated.