Sub Title : Ukroboronprom’s primary objective in DefExpo 2020, Lucknow was “Focus on Deep Innovation Projects with India”. The Ukrainian delegation was led by the Ukroboronprom CEO, Mr Aivaras Abromavicius, who spoke to Defstrat team very candidly about his vision and how the military industrial base of Ukraine can engage positively with India to meet defence needs of both countries with less strain on economy. During the conversation he touched upon a number of aspects concerning Ukroboronprom, India and cooperation with Indian defence. Excerpts from his interview: 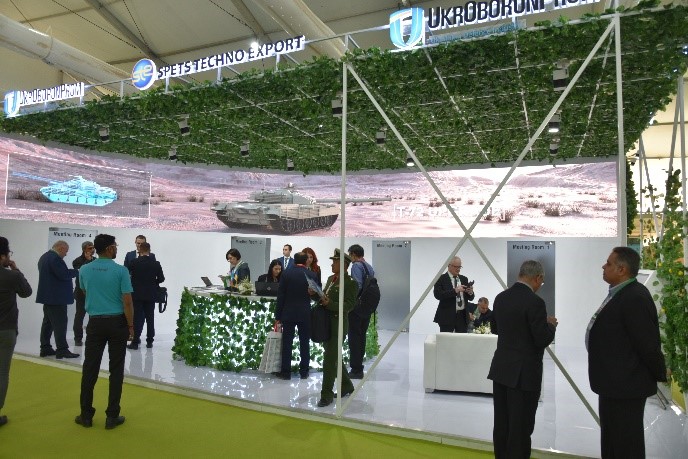 Brief Background of the Company

“Ukroboronprom” is a Ukrainian State Concern which was created in 2010 for management of the enterprises of the military-industrial complex. Today, SC “Ukroboronprom” unites 116 enterprises in 5 major defence industry sectors, particularly in armament, military equipment development and manufacture, scientific research and export-import operations. It is the company dealing in defence exports of Ukraine and we have grown into a major organisation in past few years through restructuring, adopting best management practices and policy changes. Now Ukroboronprom employs around 70,000 people worldwide.

In India “Ukroboronprom” conducts its business through its special export company “SpetsTechnoExport”, that has its own representative office in Delhi.

Ukraine, as part of undivided Soviet Union, had a large number of industries manufacturing critical defence equipment and its components. After break-up of the Union, Ukraine has invested in improving the existing infrastructure as well as developing new technologies. A very robust ecosystem of defence industry exists in Ukraine, which can offer new products as well as support for erstwhile equipment supplied by Soviet Union. Since we have the technology and the production capacity, Ukraine is now reaching out to the world, emerging out of the shadows of Russia as a major exporter of defence equipment at very competitive prices.

Ukraine as a strategic partner

Ukraine is an important country for India and rest of the world as well due to its geographic location. I will call it at being at the Doorstep to Europe. Ukraine has the benefit of sourcing components from Europe as well as access to markets of European Union. The labour in Ukraine is also cheaper as compared to other countries in the region. We were slightly handicapped due to the Russian military aggression and they could choke the supply of critical components and raw materials needed for our industries which used to come from Russia. But now we have successfully developed our own supply chains which sustain our industries.

We are constantly expanding and also looking forward to producing in India or get into strategic partnerships. Coming to bureaucratic hurdles which posed many obstacles in forming JVs in India, the situation has now changed and President Zelensky has introduced many changes to the erstwhile policies and all such impediments have been removed. There are close to 3350 state owned enterprises in different sectors of Ukrainian economy and government is keen to improve their footprint and efficiency.

In the last six months, “Ukroboronprom” has been a vivid example of the state owned company’s transformation. My team has launched the systemic changes related to the optimization of the Group’s structure, management standards, procurement transparency, digitalization and innovations. Our partners are already beginning to feel the positive effect of these actions.

Aircraft Manufacturing industry has taken off and we expect orders from many countries. AN 178 is our transport aircraft which we have produced fully indigenously. It does not contain even a single part from Russia. State Enterprise Antonov offers full cycle of modern aircraft creation – from pre-project scientific research to construction, tests, certification, serial production and after-sale maintenance.

Ukraine produces all types of Armoured vehicles and their components, including for T-72 tanks, which are the mainstay of Indian Army. In fact, all major armoured vehicles manufacturing industry of Soviet Union were located in Ukraine. It is worth mentioning that during the DefExpo-2020 SE SFTE “SpetsTechnoExport”, that is a part of the State Concern “Ukroboronprom”, presented a new upgrade program of T-72 battle tanks which are still in operational use worldwide. Though Ukraine also has its new main battle tank for export named “Oplot”.

In addition, the “Ukroboronprom” has advanced significantly in the development of its own missile programs. A range of guided antitank missile systems, multiple launch rocket systems, cruise missile system, air missiles etc are developed and supplied domestically and abroad.

As for now we have a big number of active contracts with India despite their relatively small value. We are proud, that this year “SpetsTechnoExport”, special export company of “Ukroboronprom”, was named the “best supplier” for the India’s HAL and has signed the
Long-Term Contract with them.

We strive to change quantity to depth and quality. That means an increase of complex projects with a considerable innovative content. “Ukroboronprom” mainly supplies spare parts and components and provides services. At the same time, over the last 6 years “Ukroboronprom” enterprises have developed unique solutions- as completely new state-of-the-art developments as well as modernization packages for Soviet military equipment, which continues being in operational use in India. These solutions were tested in the conditions of war and were taken into service by the Ukrainian army. They are innovative and are giving military equipment qualitatively new characteristics.

We are aware of the fact that no country can afford to procure new military equipment in large quantities. Great emphasis is laid on upgrades, which Ukraine is fully capable of providing to existing platforms and equipment used by Indian Military.
It mainly concerns Armoured vehicles, Air Defence systems and Aviation. These are the solutions we will offer to the India in the immediate future. Ukraine is also using these equipment with components and munitions now manufactured indigenously.

We look forward to being partners in Make in India projects. Indians can also invest in Ukraine and as such we have a large number of Indian students pursuing higher studies in Ukraine. We would like to bring to India, our expertise and products at very competitive prices and build a strong partnership.