Sub Title : The country's defence reforms are intended to support the objective of self reliance 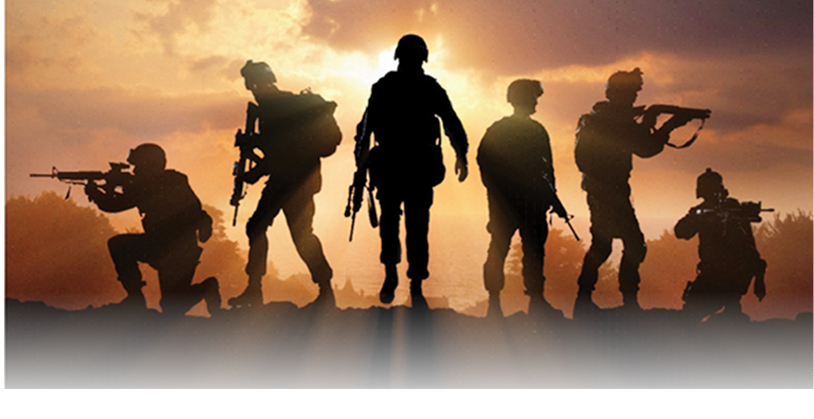 India has introduced substantive defence reforms. As the armed forces need to continually enhance their prowess due to rapidly evolving technologies and the fast changing character of war, capability development through technological enhancement and innovation are an imperative. The country’s defence reforms are intended  to support these goals as well as the objective of self reliance

The Ministry of Defence initiated substantive reforms in the year 2020 keeping in mind that a transformation today is for a better tomorrow. Its steps included not only earmarking large funds as budget allocations for domestically made defence equipment but also formulating new and tweaking the already existing policies to promote self-reliance with an efficient mechanism. The stride has not come to a halt ever since. A visible sense of purpose and increased transparency as to why and how the Government plans to achieve the end result of becoming a worldwide leader in defence has increased the national as well as global faith and trust. This has resulted in increased participation by those Indian nationals who were not previously involved in providing for the defence sector and in new export-import transactions. The changes introduced and implementation of those were the need of the hour and data shows that they have been duly absorbed and accepted by the economy as well.

The Ministry of Defence revealed the new manual for capital acquisition, Defence Acquisition Procedure, replacing the erstwhile Defence Procurement Procedure, in September of 2020. Though the essence in the new manual remains the same it attempts to enhance the already-existing elements in a way that India’s agenda of self-reliance is promoted. 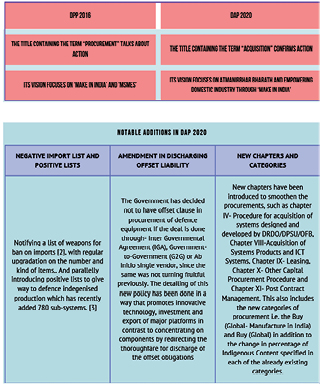 Corporatisation of The Ordnance Factory Board Into 7 DPSUS

This act has not only brought the Ordnance Factories under the ambit of the Companies Act, 2013, thereby improving their cost-competitiveness, but has also nullified the monopoly they enjoyed which in turn hindered their motivation to innovate and produce more and has also given flexibility at the managerial level. Without having specified the details, the Pune headquartered MIL has received one of the largest export orders of ammo, amounting to Rs.500 crore. These businesses have been successful in achieving to bag domestic contracts worth Rs.3000 crore and export orders amounting to around Rs.600 crore.

Government initiatives for promotion of MSMEs in Defence Sector 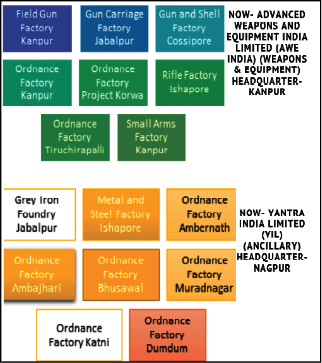 Strategic Decision of Having two Defence Corridors In India

Self- reliance in defence is necessary for achieving higher goals and  will come about by strengthening the defence industry of the country. With this intent the Ministry of Defence announced the establishment and development of Defence Industrial Corridors in UP and Tamil Nadu in 2018 with an aim of ensuring wide connectivity among the various defence industrial units of India. This decision of the Ministry of Defence will not only result in self- reliance in defence but will also further nourish the idea of ‘Atmanirbharta’.

The decision of setting up Defence Industrial Corridors (DIC) in these states comes with a high end goal of attracting domestic and foreign investments with bare minimum utilization of resources from foreign industries and acts as a catalyst for indigenous production of defence and aerospace related items by the MSMEs. The Uttar Pradesh Defence corridor has been set up for connectivity in 6 city nodes whereas  for Tamil Nadu it is 5 nodes. With Tamil Nadu’s excellent port facilities, international airports and atomic power plants the launch of TANDICO (The Tamil Nadu Defence Industrial Corridor) will further create new aerospace defence production and certification facilities. The Uttar Pradesh Expressways Industrial Development Authority (UPEIDA) will execute this project with a sight of rationalizing defence regulatory regime with easy reimbursement policies and subsidies.

The Chart below shoes the implementation of strategic two defence corridors mechanism.

India, which has one of the largest militaries in the world, had also become one of the biggest importers of defence equipment. The Indian government has made numerous efforts to indigenise the defence industry. India’s massive growth in defence exports can be largely attributed to the Make in India movement, also known as ‘Atmanirbhar Bharat’ or self-reliant India.

Compared to 2012–16 India’s defence imports decreased by 21% in the period 2017–21. This resulted from the private sector and several state-owned firms placing a greater emphasis on domestic design and production of defence equipment. The government’s ambitious export goal for 2025 is to reach US$ 5 billion. India is quickly becoming the preferred strategic partner for smaller Asian countries seeking to introduce high-end defence equipment on a tight budget.

Recently India struck a significant export deal with the Philippines for the Brahmos supersonic cruise missiles, worth US$ 375 million, which has sent a strong message in the Indo-Pacific region. According to the Defence Ministry, since 2014, the nation’s exports of weapons have increased six times, reaching US$ 1.59 billion in FY 2021–22. This tremendous growth can be attributed to a number of government-proposed measures that would increase defence exports and facilitate ease of doing business.

Role Of Intellectual Property in Defence

The negotiated contract that gives international market exposure and a proportionate ratio of the resulting earnings should include joint intellectual property rights and shared global market space.

Indian defence sector is an important component of the economy and helps in ensuring the national security of the country. The defence industry needs cyber security for modernising  India’s armed forces and reducing dependency on  external sources and to encourage ‘Make in India’ activities. Digitization and cyber security have a relationship of their own which affects the security of the defence sector in India. During the pandemic instances of cyber attacks accelerated extensively and the attack surface too expanded much more than before.

The Security Manual for Indian Licensed Defence Companies (ILDC) introduced by MoD in June 2014 outlined for their contractors and subcontractors the architecture that needs to be put in place by Indian Defence Companies. The IT sector in India has emerged as one of the most significant and integral part of country’s businesses and governance. In May 2021, India set up its Defence Cyber Agency (DCA).The National Technological Research Organisation, Research and Analysis Wing and the National Security Council which have often been targets of cyber-attacks are now protected by DCA. An effective and ever evolving cyber warfare strategy is imperative for  India to continue developing  its strategic capabilities.

According to the Global Firepower Annual Defence Review, India’s military force was ranked fourth out of 142 nations in 2022. To improve our ranking in upcoming index revisions, we must fix a number of internal issues. Vocal for local would strengthen India’s defence infrastructure by advancing the domestic defence industry and encouraging the creation of a variety of cutting-edge technologies and weapons. The armed forces need to continually enhance their prowess due to rapidly evolving technologies and the fast changing character of war. Capability development through technological enhancement and innovation  are the need of the hour. The country’s aggressive defence reforms will support these goals.