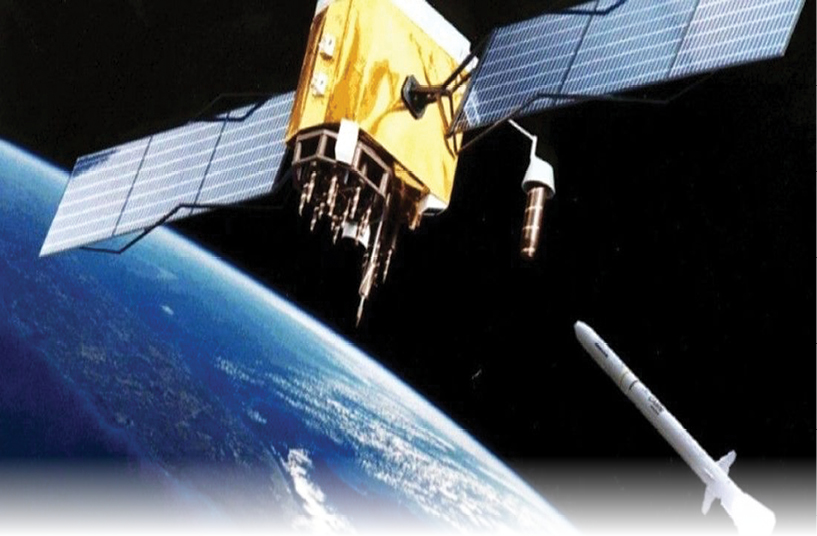 Mission Shakti, India’s Anti- Satellite Missile test in the last week of March left the World largely unhappy as experts called it one more trend towards militarisation of space. The test makes India the fourth country, after the United States, Russia and China, to test an ASAT weapon. The test  clearly demonstrated the capabilities of India’s overall space program and more importantly  strong national resolve

Imagine a bullet speeding towards you. You have less than a millisecond to detect it, calculate speed and trajectory and then fire at the anticipated point of impact to hit the target when both projectiles are hurtling at a combined speed of around 10 kilometers per second.  Hitting a target with such precision and – that too when the target is hundreds of kilometers away in space – is a marvel of high technology. And that technology was demonstrated by India’s Anti-Satellite test on 27 March.

At 11.10 AM that morning, a 13-meter-long Ballistic Missile Interceptor, took off from the Dr A P J Abdul Kalam Island launch complex off the coast of Odisha. The three stage missile climbed rapidly into a low earth orbit and homed on to a van sized Microsat –R satellite (which had been launched two months earlier as the target for the test) orbiting 268 kilometers overhead. It slammed into it with a combined speed of over 50,000 kilometers per hour, shattering the target satellite and raising cheers amongst the DRDO scientists at their ground station below. The time between launch to destruction was less than three minutes, around the time you would take to read these pages.

India has now barged into an elite club of nations with demonstrated A-Satellite capabilities. USA is the lead with a 30 year head start in the field. It set the pace in Oct 1985 with the firing of the first A-Satellite missile into space. It followed up with an air-launched missile fired from a B-47 Bomber and then used an ASM – 135 kill missile fired from a F -15 to destroy a solar observation station in outer space. The former Soviet Union also conducted its own tests. However, they adopted ‘killer satellites’ – miniature satellites that were guided into the orbit of the enemy’s space target and then collided with it. China demonstrated its own credentials in Jan 2007, when they used a kinetic kill vehicle to target one their ageing weather satellites in high orbit. Perhaps making a point, the US followed up with another test just a month later – this time using two specially modified Ship to Air missiles fired from the destroyer ‘USS Lake Erie’  at a target satellite.  These tests, like the recent Indian one, were more than technology demonstrators. They were designed to send out a message.

Besides ballistic missiles, other means have been developed to destroy an adversary’s space assets. The ambitious Star Wars project envisaged the use of lasers and pulses of high energy to fry satellites circuits or deflect it from its orbit. Methods to envelop an enemy satellite by sheets of Mylar plastic have also been considered. More subtle means incorporate infiltrating into the recording and transmission system of the satellite and feeding it false, incorrect data. An enemy satellite hovering overhead to detect troop movements would be fooled by having old images of the area fed into its transmissions. Wrong messages and images can be transmitted to the ground station without the target audience even realizing it.

India’s has sent out the message that it is now a major power in space. Like the Operation Shakti nuclear tests two decades ago, this technology, does not need repeated testing. The basic data merely has to be scaled up. Anti-Satellite capabilities can be enhanced by merely powering the missiles to strike targets in High Earth Orbit and even geo-synchronous orbits above 36,000 kilometers where most strategic space assets are deployed. The parameters for detection, calculation of speed and trajectory, homing in and striking high speed space targets have been validated. Future testing can now be done through computer simulation.

Nor will another test be in order. Each test creates over 100000 pieces of debris which orbit endless across space at speeds over 20000 kilometers per hour. At those speeds, even if a piece the size of one centimeter strikes a space asset it can cripple or destroy it, creating further space debris. This chain reaction, called Kessler Syndrome, could cause belts of perpetually whizzing debris in orbit which could make space unusable.

Already an order exits to govern the use of Space. The Outer Space Treaty prohibits the placing of any weapon of mass destruction on the moon or their deployment  in Outer Space. It does not prohibit ground or air launched A-Satellite systems though, and this provision enables the engagement of space targets from earth based launchers. A new, more comprehensive Space treaty is on the anvil – the PAROS, or Prevention of Arms Race in Outer Space, which will most probably ban all further testing in space, and lay stringent guidelines for space weapons and their deployment. By conducting the test at this juncture, India could have a greater say when the treaty is finalized.

India was left out of the NPT when the superpowers chose an arbitrary date for those who had conducted a nuclear test before 1967, to determine who would be the nuclear Brahmins and the non-nuclear lesser mortals. Should a similar protocol be established for the Space Order of the future, India would be a major contender for a seat at the high table.

Space as an Arena

The tests are also essential to enable us to safeguard our space assets. Space is the fifth dimension of warfare after land, sea, air and cyberspace and forms the backbone of communications, navigation, surveillance and information systems on earth. An estimated 320 military satellites orbit the earth; with the USA having a constellation of 140, Russia having 80 and China with 35. India has two dedicated military satellites; the naval G SAT-7 and the IAF’s G SAT- 7A. More importantly there are 4987 satellites whizzing overhead (including 115 Indian) which are used for a host of applications on earth. Remove the satellites and operations on earth could come to a grinding halt.

Space assets help the actions of the military in navigation, early warning, surveillance, precision guidance of munitions and other applications. It is a vital arena for Force Enhancement and through it military activities on earth are considerably enhanced. It could soon be used for Force Application, where space assets can be used to strike space and ground targets. Satellites and space stations will become a vital arm of warfare and thus the ability to degrade enemy space assets and preserve our own will be even more essential.

Space is fast emerging as a vast and lucrative market, whose size of over $350 Billion is likely to triple over the next two decades. Individuals and organizations such as Elon Musk with his ambitious Space X project, Amazon, China’s One Space project and Japan’s Interstellar Tech  are entering the arena, which has so much scope for space tourism, mining for rare minerals and perhaps future colonization. The race towards space, which had been stalled after the Cold War is regaining momentum.  The USA has revived plans to place a man on moon; China too has developed its space activities and recently landed a lunar vehicle on the dark side of the moon. Russia, Japan and France are developing space programs to explore outer space. India is a major player in the satellite launch market and through its GSLV and PSLV has successfully placed over 400 satellites in orbit, including 104 satellites in one single launch. The success of its  lunar probe  Chandrayaan I has set the stage for a lunar lander and orbiter in the second moon mission sometime in 2021. The Mars Orbiter Mission, Mangalyaan, was another spectacular success and made India only the fourth nation to reach Mars – and that too at a cost lower than the production cost of the space movie ‘Gravity’.

With so much at stake in space, it is essential to develop a National Space Strategy which will coordinate all space activity, and also create an Aerospace Command which will look after the main arenas of modern warfare – space and cyberspace. The US has recently announced the formation of a Space Force which will oversee all space operations. China is actively developing counter space capabilities and has set up a dedicated Strategic Support Force to handle space and cyberspace operations. Its space dominance operations range from kinetic kill vehicles, to jammers to lasers and high energy pulses and is developing permanent space stations with military applications. India lags behind in this field and it is essential that the existing Tri Service Defense Space Agency, be upgraded to a full-fledged Aerospace Command to formulate a cohesive National Space Security Policy, one which will encompass the nature and quantum of space assets to be deployed, their roles and also how they can be best utilized and protected. At the same time the ability to degrade an adversary’s space assets should also be retained.

The test should thus be viewed as part of an overall space strategy that will determine our objectives in space. Plus the spins off of striking a target in outer space can be applied in developing a cogent defense to shoot down incoming missiles. Our capabilities have been demonstrated – both in deploying space assets and in protecting our own. Now we must build up upon it to develop our space and counter-space infrastructure to enhance our security both in space and on earth.