Sub Title : Tackling the threat of WMDs in the North Arabian Sea 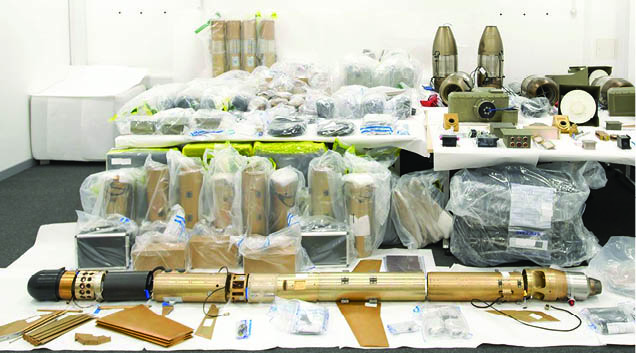 The north Arabian Sea continues to be the center of gravity of both non-traditional and traditional security threats and challenges with the threat of proliferation of Weapons of Mass Destruction, particularly ballistic and cruise missiles being one of serious concern. The article  gives a backgrounder and international and Indian responses in this regard

Earlier this year, in a joint operation, the British Royal Navy and the US Navy intercepted small boats in the north Arabian Sea. Their cargo included components for cruise missiles and surface-to-air missiles suspected to be of Iranian origin and ostensibly bound for Yemen. This seizure, according to UK Minister for the Armed Forces James Heappey, corroborates the “long-held belief among US intelligence and defense officials that Iran is supplying sophisticated weaponry to Yemen’s Houthi rebel faction”.

The north Arabian Sea continues to be the center of gravity of both non-traditional and traditional security threats and challenges. While the international attention is on asymmetric threats and challenges, the threats of proliferation of Weapons of Mass Destruction (WMD) particularly ballistic and cruise missiles has also been enveloping the region.  The trends in proliferation and sea-based transit of WMDs in the north Arabian Sea are particularly significant for regional security and are indicators of the persistence of the traditional state centric conflicts and the continuing relevance of the primacy of deterrence.

WMDs are of concern to the international community and therefore the issue has attracted intense   debate and discussion. The development of these types of weapons and their delivery systems has primarily been the forte of the technologically advanced countries who have set up a complex nuclear-military infrastructure. In fact, it has been a state-centric development and is best represented by the Cold War style of deterrence between the US and the Soviet Union who along with their allies built a sophisticated nuclear arsenal. They deployed land based nuclear weapons, built strategic bombers and submarines capable of carrying nuclear weapons, which added to their second strike capability. These underwater platforms prowled across the oceans and thus supported nuclear deterrence.

As far as nuclear weapons are concerned, among the many trends towards making these more sophisticated, miniaturization has always been high on the agenda of the nuclear scientists. There were simultaneous developments with regard to delivery systems particularly ballistic and cruise missiles which were designed to be fitted with nuclear weapons. Closely associated with these developments was the issue of proliferation of weapons and delivery systems, both legal and illegal.

Although the development of WMD has been the forte of technologically advanced countries, a number of actors, both state and non-state, have been part of the global proliferation network, thus undermining international efforts at containing proliferation of WMDs. For instance North Korea’s clandestine trade in WMDs with Pakistan, Iran, Libya, and Syria resulted in the quick development of missile and nuclear programmes of these countries.

Similarly, there are worrisome developments concerning possession of radiological devices and ‘dirty bombs’ by non-state actors. For instance, in 2006, Hizbullah successfully fired a C-802 surface-to-surface missile against the Israeli Navy’s INS Hanit. Perhaps more disturbing was the knowledge that non-state actors are able to acquire high-end military hardware. Israeli military intelligence claims that Hamas is interested in acquiring C-802 cruise missiles from Iran.

It is not surprising then that during the Sixth Review of the UN Global Counter-Terrorism Strategy, the General Assembly called upon all Member States to “prevent terrorists from acquiring weapons of mass destruction and their means of delivery… and [encouraged] cooperation among and between Member States and relevant regional and International Organizations for strengthening national capacities in this regard.”

Since the 9/11 attacks on the United States in 2001, maritime community has become increasingly concerned about the safety and security of shipping. Among the many challenges such as sea piracy, maritime terrorism, drug and narcotics smuggling and illicit trade in arms and weapons, the proliferation of WMDs through the sea route has attracted attention by the maritime security establishment. In particular, they are concerned that ships are being used to transport WMDs.

Although there have not been many publicly known instances of transport of WMD by the sea route, it is important to recall at least three important interceptions of WMDs. In 1999, the Indian custom authorities impounded a North Korean vessel M V Ku Wol San at Kandla Port for carrying equipment for production of tactical surface to surface missiles, which was suspected to be bound for Pakistan or Libya.

The So San, a North Korean vessel, carrying cruise missiles was intercepted in the north Arabian Sea by the Spanish Navy. As many as 15 Scud B missiles, 15 conventional explosive warheads, 23 containers of rocket fuel, and 85 barrels of unidentified chemicals were discovered.

The interdiction of the BBC China, a German-owned ship bound for Libya with centrifuge components supplied by the A.Q. Khan network was yet another proof of clandestine activities by a state driven proliferation network. The US and German governments prevailed on the German owner of the ship to direct it to the Italian port of Taranto, where Italian officials boarded the vessel and seized the cargo.

While these are significant success stories, in April 2005, permission to intercept and search the vessel Hual Africa from the flag state could not be obtained. The vessel was carrying a mobile crane from a German firm for Mizan Machine, an Iranian company linked to the Iranian missile program. The vessel could not be intercepted and docked in an Iranian port.

Speaking at the Plenary of the Nuclear Security Summit in Seoul, South Korea, Prime Minister Manmohan Singh stated that India remains committed to global nuclear disarmament and that ‘Nuclear terrorism will remain a potent threat as long as there are terrorists seeking to gain access to nuclear material and technologies for malicious purposes. India is acutely conscious of this threat. Our resolution at the General Assembly on measures to deny terrorists access to weapons of mass destruction has been adopted by consensus since 2002.”

India’s proliferation concerns arise from the covert and overt transfer of WMDs and related technologies by other states. Among these North Korea and China are active suppliers of nuclear related technology, delivery systems and also training of personnel.

New Delhi is conscious of the dangers of proliferation particularly the nexus between Pyongyang and Islamabad and an official statement from the Ministry of External Affairs notes that “India itself has been a victim of North Korean proliferation and its links with the nuclear programme of Pakistan. The North Korean transfer of medium range missiles to Pakistan has brought many Indian cities within the reach of Islamabad’s atomic arsenal.”

India has debated the issue of joining the Proliferation Security Initiative (PSI), a US led initiative to prevent proliferation of WMDs, but stayed away from any active participation. Among other issues i.e. legality of the initiative, legitimacy of international weapons trade, and freedom of the seas have been debated and discussed. In this context, the Indian Ministry of External Affairs has argued that the “PSI is now proclaiming the right to interdict ships not merely in coastal waters but also on international waters, which traditionally guaranteed freedom of high seas. There are some critics of the PSI who say there may not be enough legal basis for it under the present international law. Some are terming it as a “vigilante approach” to non-proliferation.”

It is fair to raise doubts about the right of the powerful nations to violate the basic principles and norms enshrined in the United Nations Convention of the Law of the Sea (UNCLOS). Like India, some countries such as China and Indonesia have been reluctant to participate in the PSI, for various reasons.

However, the Indian Navy engages in Visit, Board, Search and Seizure (VBSS) operations. For instance, in 2009, the Indian Navy undertook VBSS operations in the Andaman Sea against a North Korean vessel in support of UN Security Council Resolution No. 1874 that ‘strengthens arms embargo, calls for inspection of cargo vessels if states have ‘reasonable grounds’ to believe contain prohibited items’. Besides, the Indian Navy also trains other navies in VBSS operations. For instance in 2021, a team of Indian Navy Marine Commandos (MARCOS) trained and shared best practices with the  navies of Kenya, Djibouti, Mozambique, Cameroon and Coast Guard of Georgia. The Indian practice of VBSS is not just limited to counter proliferation operations, the VBSS teams also offer assistance at sea. For instance, the VBSS team from INS Talwar provided technical assistance to MV Nayan after the vessel suffered power-propulsion-navigational failure.

India is a nuclear weapon state and is a non-signatory to the Nuclear Proliferation Treaty (NPT). It is a strong proponent of the objective of global nuclear disarmament and has strived to uphold the international principles of non-proliferation.

It is also a State Party and signatory to a number of international conventions relating to WMDs and remains committed to not to engage in transfer, assist, sale or export of weapons of mass destruction and also to prevent and counter proliferation of such weapons, devices and delivery systems. However, regime such as the PSI remain an issue of concern for New Delhi.